I’ve never played on New Year’s Day. Teeing it up on the first day if the year was pretty cool, and I rose to the occasion!

I was honestly worried the layoff was going to effect me. Beyond that, I wasn’t sure if my passion for golf, let alone playing golf, was still burning inside like it used to.

Life has been crazy lately. It’s an excuse I’ve used in the past, but as of late, I’ve been beyond busy. Not even able to find time to putt in my backyard. Or, take some swings in the garage.

I’ve put in a lot of time over the past couple of weeks revamping this site. Taking a deeper look into the reviews and articles JT and I had done in 2016. Plus, adding some new looks to the site. It’s been good therapy. I always thought of this site as a way to help me calm my brain and reflect on my game. That was certainly the case the last 30 days.

I never like taking a hiatus, but sometimes it’s just out of your control.

If I’m completely honest, the Canada trip back in July freaking wiped me. 90 holes in 3 days, 72 of which we walked at a, not so fat guy friendly, layout. I played once and Reflection Bay after that but just didn’t feel it. Then back in early November, when Pat came into town, we played LV National on GolfBoards. That was a blast, but I played like shit. It was the first round I played after practicing with the “one-length” clubs I have built.

An unfortunate turn of events took place with those clubs. The Ravens were just too close to a players blade for me and not a good fit. I loved the one-length of the irons, and I think I’ve going to explore it a little further in the future.

For now, though, my TaylorMade Speedblades are going back in the bag. 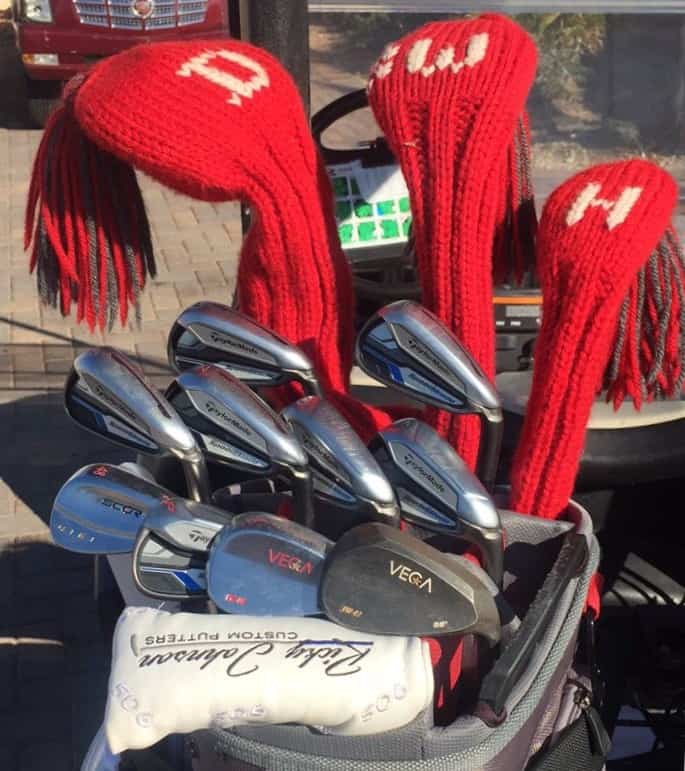 Two rounds of golf since July, not exactly the ideal scenario for a golf blogger.

The break did me well, though. I had a clear mind when I went into my round yesterday. That, combined with my reinvigorated excitement for the blog had me feeling great during my warm-up. I went into the day doing my best to stay calm and let the shots come to me. I didn’t want to force anything and let my neurosis take over.

Despite my utter distaste for FootGolf, I buried my disdain for the management at Chimera for allowing the travesty that is FG and took them up on their $25 after 12:30 pm offer. 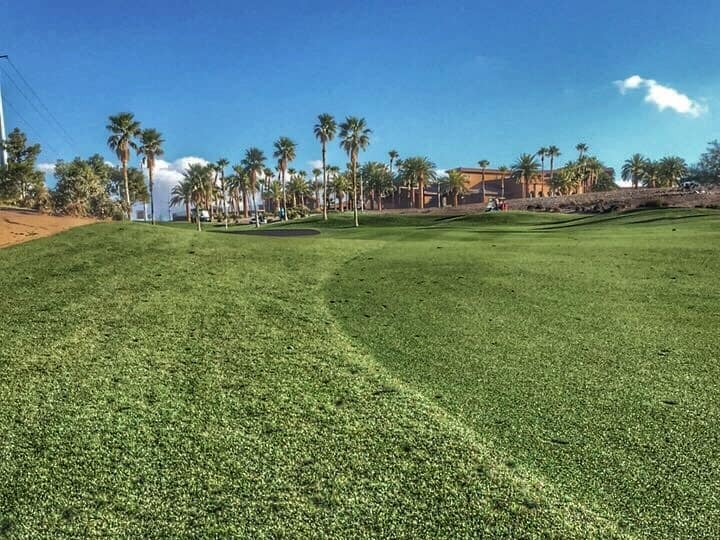 The weather was outstanding yesterday for January. 59 degrees at our tee time and it pretty much stayed there all day long. The wind picked up a bit on the closing holes, but overall the conditions were 9/10.

Considering it is January, I wasn’t expecting much from the course. What a surprise it was when I cruised down the driveway to the course and saw an immaculate fairway on the first tee.

Top notch to say the least. From the tee boxes to the fairways and greens (no bunkers for me so no report on those!) everything was is tip top shape. It’s a huge change from the previous Tuscany Management. They always seemed to let the course go in winter. Not anymore. Chimera is as good in January as it is in April or October. For Vegas golfers, that’s great news!

OK, on to my round

Let me show you the scorecard first 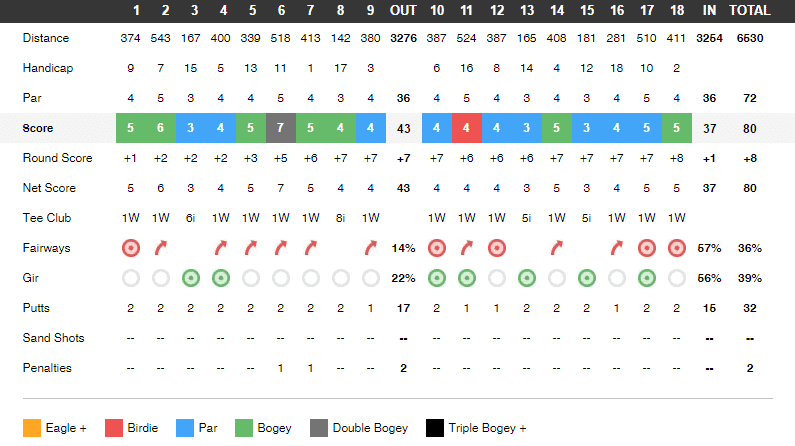 The start was pretty typical. Bogey, bogey start. I had par putts and not difficult ones, but it was early in the round, I had yet to located my putting stroke.

The third hole I started getting into a groove with a good tee shot and a two-putt par. The Same thing followed on the fourth hole. 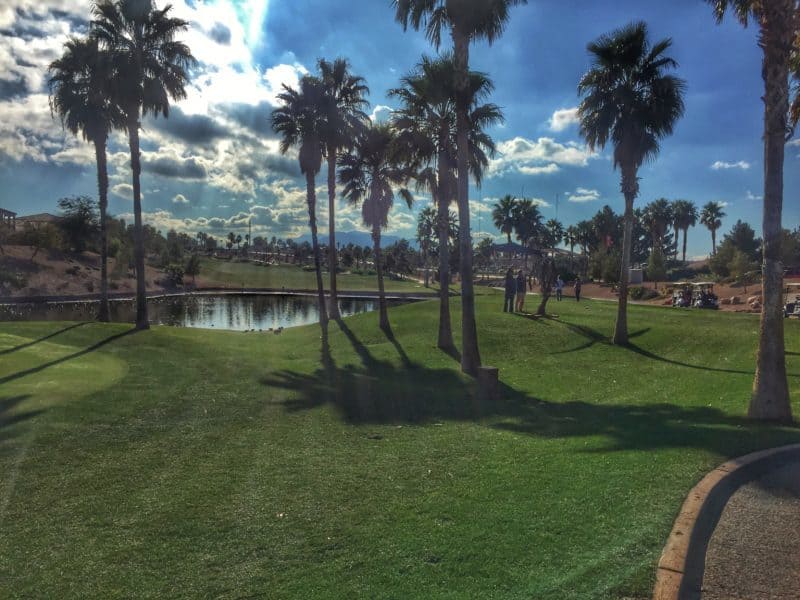 My big mistake of the round come on the sixth hole. A bad tee shot had me taking a penalty stroke. I recovered nicely and had a decent shot into the green. I pulled it just a tad and was off the green in some very manageable rough. My chip shot back to the green whizzed by the flag, and I ended up with a 20′ to try and save bogey. That putt came up about 4′ short, and I walked off with the double.

Usually, this is when my round would collapse. It almost happened too. My next tee shot was equally as bad, but I managed to get to the green and two-putt to save bogey. It could have been so much worse. Because I didn’t let the error on six entirely consume me, I played some good golf. Finish off the 9th with a putt from 20 feet to save par. I was feeling great as we made the turn.

The good play continued and as you can see I logged the best nine-hole score to date with a 37. 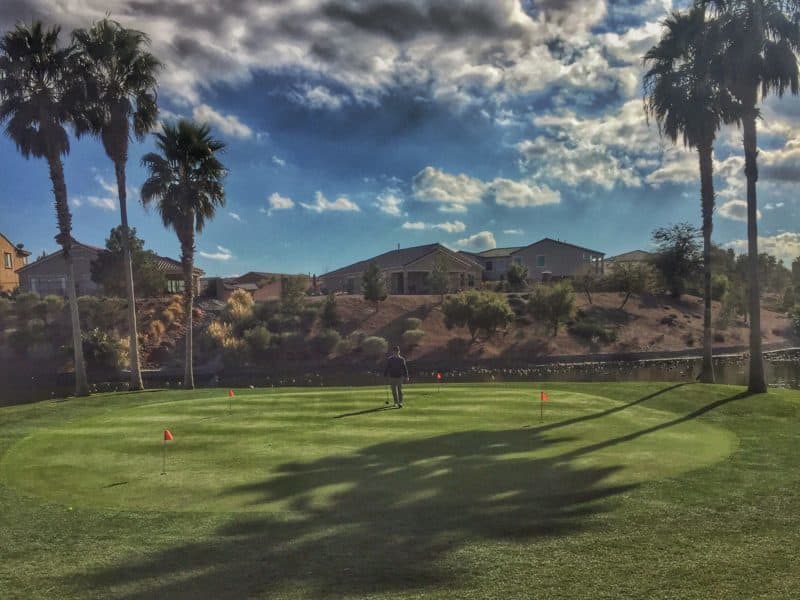 Slow play almost got us be we were able to finish, all be it at dusk, but we did. I had to layup on 18, the wind picked up a bunch and was right in our faces. That’s a tough shot with no wind, so I played it smart and wrapped up the round with a very pleasing 37.

By FAR the best I’ve played and in a long time.

I hate dwelling on events from the round. But, had that approach on six been just slightly more on target I could have easily walked off that hole with a par. That would have been a 78. Stupid chip shot. Serves me right, though, it was round rust. Not practicing and expecting legit results.

Couple side notes from the round

The round I played with Pat at LV National was the first time I put the new Bridgestone B330RX in play. While my game that day was rather lackluster, I hit the piss out of the ball with my driver. The Raven irons never let me see the full potential with the ball. I’m happy to report I’m switching to this golf ball for 2017. I got this first box from High Side Golf (review upcoming), and the next time I’m anywhere near a golf outlet I’ll be stocking up.The ball is outstanding. 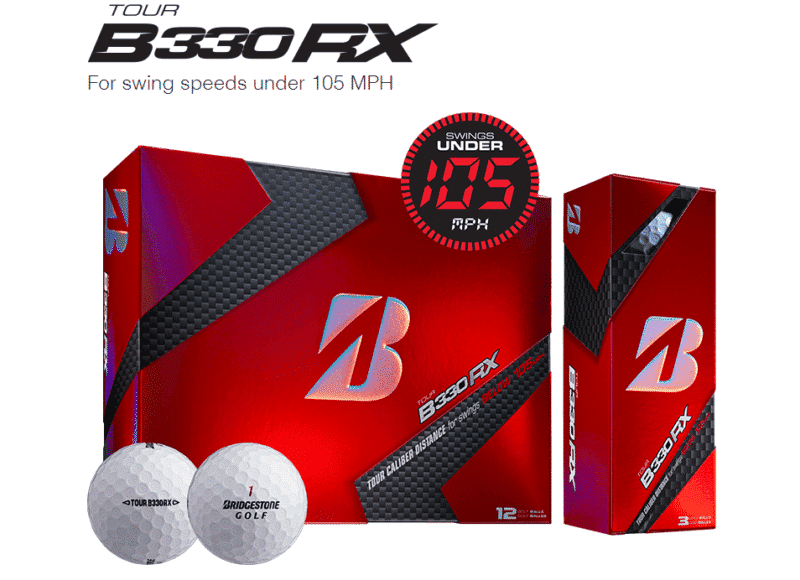 The other change I made besides the golf ball, was switching back to my old set of DTX Midsize Pure grips. I won a set of the Pro Pure grips that Pure customized with “The Breakfast Ball” and I played most of 2016 with them. The Midsize DTX just feel so much better in my hands. I realized just how much better when I was practicing with the Raven irons. So I switched them out Saturday night, and I’m more than pleased with my decision.

The last thing I did was take some info from JT, who just recently obtained a new driver, and changed my driver up a tad. His new stick was a half inch shorter than his previous model, and he told me he’s been killing it with the new club. So I said what the hey, and hacked about 3/4 of an inch off my current gamer.

The results were surprising. You can see from my scorecard that I didn’t hit a lot of fairways. With the miss being to the right. The good news was it was not a slice. It was a push. Everything started right and stayed there. Even better it wasn’t a bad push to the right; it was just a bit off. My distance was fine; I was happy where I was ending up down the holes. My ball striking was very solid. I just need to spend a little time with the club and get the kinks worked out.

I’m still plagued with an inability to hit a fairway wood. I attempted a few on the range but quickly put the head cover back on and didn’t touch it again for the rest of the day,

Things are positive for 2017

There are some things I need to work on fixing. Mainly practicing more! I am excited about playing again; that was something I was deeply in need of requiring. Hopefully my next outing I’ll be able to fix those little flaws off the tee and break my PR of 79!