This Carbon Putters story is a must tell.

When I first DM’d the crew at Carbon, it was to create a putter that not only would be a top performer but a one of one custom work of art. Something that would be sentimental and hold a special place in not only my bag but my soul. I had decided that it was finally time to create the “KOREA PUTTER.” A putter that would encompass one of my favorite putter shapes and my Korean heritage. I was adopted when I was very young from Seoul, South Korea, and I have always been very proud of my heritage.

The Story behind the putter

The idea of the Korea Putter was to create a Putter that would be unique only to itself and hold not only a strong sentiment but produce the personal performance that I was looking for in a flat stick. Now, why did I end up choosing Carbon Putters? I sent a few messages to some Putter manufactures that I thought I would want to collaborate with me. Some replied some didn’t.

What sold me was the way that Carbon treated me like family. Carbon being a family-owned and operated business made me feel no less. I had such an enjoyable experience working with the Carbon family. Not only did they answer every question I had, but they made every IdeI had come to life. I am working on my next creation with them right now, back to the creation process.

I chose the Masterson head shape as it closely resembled my current gamers, which at the time were mid-mallet heel-shafted designs. The Masterson was the choice also because the topline and cavity were completely clean, and that is something that I am very deliberate about having on my putters. I prefer a single sight dot for alignment and a perfectly clean cavity. After talking with Carbon, I decided to go with a GSS (German Stainless Steel) metal for my build. I chose a deeper mill pattern for a softer, more muted feel and sound. We finished with a satin finish for a non-glare appearance. 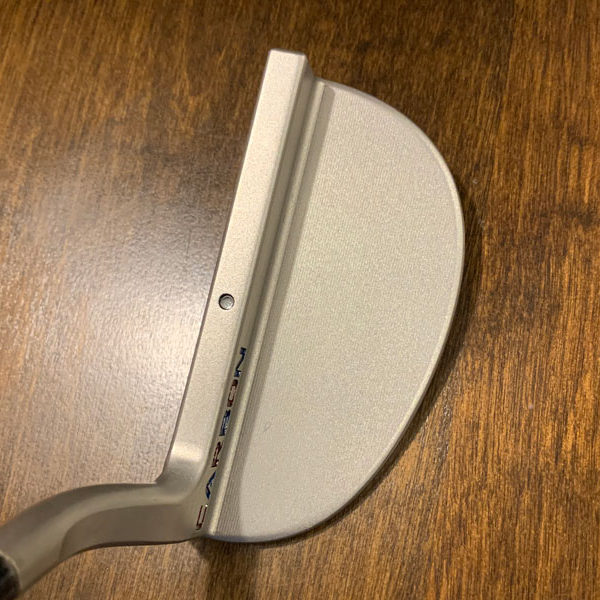 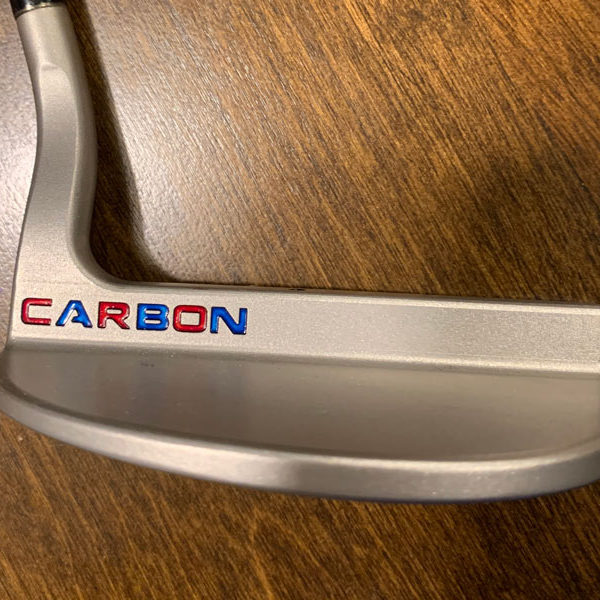 The fine details were the next item on the list.

I wanted to first and foremost make sure that the South Korean flag was proudly represented on the build. After a few messages back and forth, we decided that the sole of the putter would be the best place to show it off. I wanted it to feel as if the bottom of the putter was the entire flag. 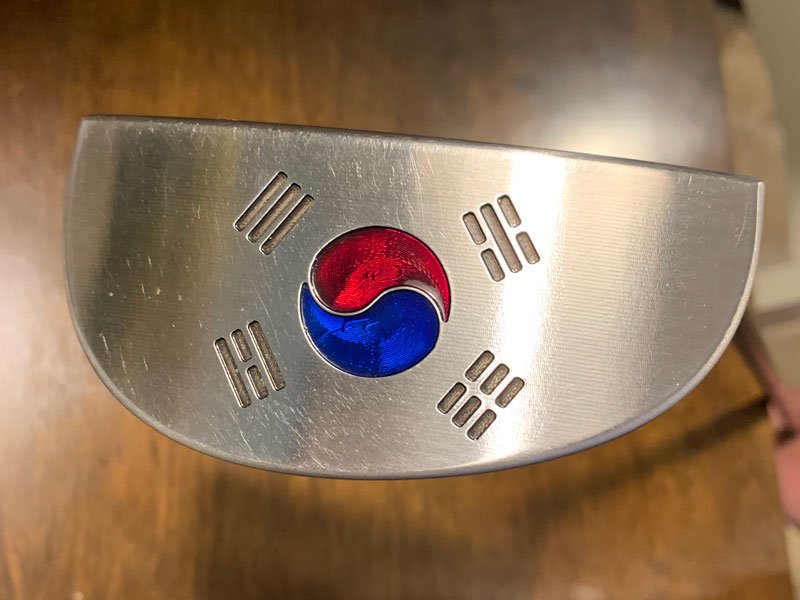 The team milled the details of the flag into the sole without bordering the flag, creating a pretty creative effect. Lastly, I needed to have my Korean birth name on the putter. With the approval of the Carbon team, I was able to put my name on the face near the heel where you usually will find the Carbon chamber logo or a bullet casing. It turned out FANTASTIC. 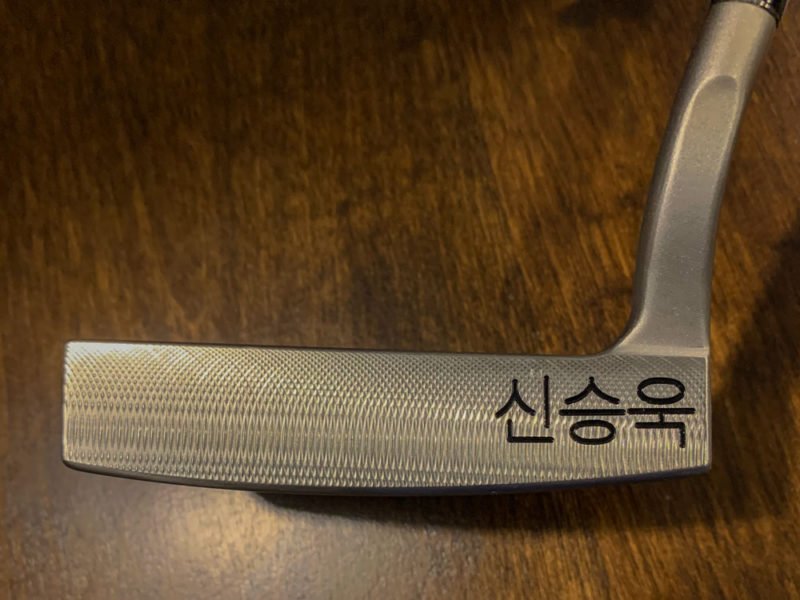 The arrival of the Carbon Putter

When I received the putter in the mail, I opened the box to unveil something that I never imagined. I had reviewed the pics and progress photos. But nothing could prepare me for the way I would feel holding and seeing the putter in person. I’ll be honest; I became very emotional and extremely grateful that a company would take the time and energy to create something so unique and special for me. For someone they had never met, I just knew virtually through Instagram.

The craftsmanship of the putter was second to none, and the feel off the face was as pure as anything I had ever rolled.

In my first round with the putter, I had just 24 putts.

By a longshot, the least number of Putts I have ever had in a round! I carded a 74 that day, and if I could hit a fairway would have been a fantastic round of golf. Carbon, if you’re reading this, do you make drivers? When you strike the sweet spot, you get the feedback that you would expect. Complete stability in the putter head and a ball that hugs the green as it tracks towards the target.

It performed EXACTLY how I wanted it to on mishits. Now I’m a firm believer in feedback off the putter face. I need it to not only feel pure on the sweet spot but provide me the feedback necessary that I didn’t hit the sweet spot. It does just that by giving a rather subtle reminder that you were a smidge off the toe or a smidge off the heel.

With some of my other Putters with this head shape, I at times have a difficult time feeling where I struck the putt due to the insert or quality of the metal and milling. With the Carbon, I can pinpoint precisely where the ball contacted the face. Which, in turn, makes me a more aware and capable putter.

Dan is THE MAN

Having rolled all of the top brands and even putters with rubberish inserts. I can tell you this putter will hold its own with ANY of the major players and will utterly crush a putter with an insert. I have always been an insert guy, and I love me a good soft insert, however, after a lengthy conversation with Dan from Carbon. I finally understood that I could get the same performance from quality milling on the face. Which, in turn, eliminates the inconsistences that inserts can provide.

Dan helped me to understand that the shape and depth of the grooves is one of the most important properties when choosing the correct mill pattern. The reason I chose the deeper mill was I wanted the putter to mimic the softer feel of an insert. If you prefer a firmer feel, you can use a shallower mill and achieve a firmer feel from the same piece of metal if you’re like me sound is also a massive indicator for feel.

With a deeper mill and less surface contact on the ball, you get a softer muted sound at impact, which in turn leads to a softer feel in your hands naturally. You can manipulate the sound with milling patterns or even with sound slots cut behind the face. In short, Carbon makes a quality product and one that should continue to receive more exposure as time progresses.

If you’re thinking of trying a milled putter that is made in the USA and milled to spec. You should keep Carbon on the top of your list. Between their classic designs and gimmick-free technology, you will find a flat stick that suits your needs. They have an array of different metals and finishes that you can choose from as well. Sure, the other manufacturers have more marketing and more massive following.

But you’re just paying for the name. With Carbon, you are getting performance quality craftsmanship and a personal touch from the Carbon family. Think of it this way,  you can go and have your chain restaurant meal, and it will likely be the same every time you visit, much like the mass-produced putters at your local shop. And that’s not a bad thing. But if you’re looking for personal perfection and uniqueness from a family-owned company, like eating a home-cooked meal from mom. Then Carbon is 100% the Brand and family you should trust.

Again, I encourage you to explore what Carbon Putters has to offer.

The Carbon family will help fit you if you need assistance or if you know your specs will get you into the right putter for your game. Putting is personal and is the club that you use most every single time you play. Why would you trust a mass-produced product when you can have a personal piece for equal or less money? That’s a decision you will need to make yourself. But I know where my money is going.

They have an outstanding Instagram page and if you’re not, you should be following 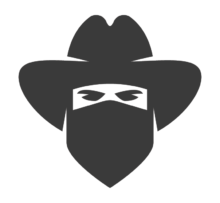 The social pages are always fun, but also be sure to visit their WEBSITE if you are looking to add a putter to your bag.

And if you’re wanting even more information about Carbon putters, be sure to check out the Chasing Daylight Podcast episode where Matt and Ryan interviewed James, one of the brothers who is also an intricate part of the team.

A contributor to the golf blog The Breakfast Ball. Do I take Golf to be mine to love and to cherish for better or for worse.. Until death or retirement (multiple) do us part? I do.