Now that was a bad day. Arroyo Golf Club

My day out at Arroyo Golf Club

I guess one positive spin I can throw out there is that if I needed to get a bad round out of my system now was a good time to do so, with just over 9 weeks until the annual Winter Classic tees off. I was hoping last Wednesday, when I played out at Arroyo Golf Club, would have been a round to build on as the days get shorter to our little event, but that wasn’t the case. Complete failure on my part to bring anything and I mean ANYTHING to the round. My driving was beyond bad, my chipping  and iron play was awful and my putting was downright embarrassing. I hit 5 out of 14 fairways, 2 out of 18 greens and walked off the course with 41 putts. I had only a single one putt and that was from six feet. Three OB tee shots (one of them on a Par 3, yeah it was that bad) and a total of 6 penalties.

Randy joined me in the despair shooting a 104, besting me by 4 strokes. It was clear that Arroyo got the best of us, neither one of us played very well. Its been a while since I put up a score that bad and I wish I had some better excuses, truly I do. What makes it hard to find a valid excuse is Bill went out and shot a 81. Which could have very well been a 79 had his putt from the fringe not rolled just passed the cup on the last hole. With his performance it’s tough to blame the course, even though the ground was abundantly moist (see the pic of the plug ball below). We did play from some  longer tee’s than I’ve been playing from lately but not obscene, and that was my choosing. It was either 6,883 or 6,433 and the lesser yardage just wasn’t appealing, at least not to me. Now, as I sit here today, I can look back at what took place and the smarter choice would have been to play the closer tee’s, especially since this was a course I had never played before. 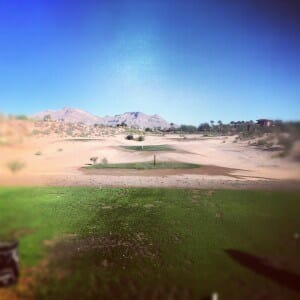 The Arroyo course at Red Rock Country Club is a nice facility and the scenery of the surrounding mountain ranges is stunning. They have some very odd policies though and that caught me off-guard right from the get go. First off the range is nowhere near the first tee, I mean not even close. We had to be shuttled to the range via a golf cart trolley that, like a bus stop, had a schedule of pick up’s and drop off’s. I was asked, when dropped off, how long we would be so they could return and come get us. OK, that was weird. I’ve never been asked how long I would be warming up. After I finished with my warm up I hitched a ride back to the clubhouse where I was directed to a small area outside the restaurant where they have a putting green set up. I wanted to get in a little practice for a bit before we headed off to the first tee just like any other round I’ve ever played. This was so odd. The driving range was so far away from the clubhouse (reminded me of the drive from clubhouse to the practice area at Seven Canyons) and then this, what seemed like a handcrafted, putting green was hidden behind the Pro Shop like it was secret or something. I thought all that was weird but when we were escorted to the first tee by the starter (another 5 min drive) I knew something was a little off with this place. 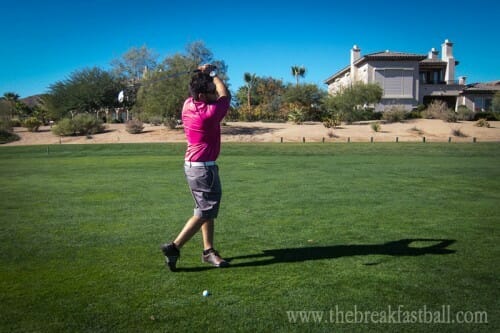 The “Public” Arroyo course and the “Private” Mountain course share the same site but are WORLDS apart. Before I allow my rant to get too far off topic let me first say that The Red Rock Country Club is a fantastic facility. I had the pleasure of attending a wedding there once and it’s an awesome place. My issue is with the Arroyo track and how it was operated the day we were there. From my perspective, the main problem I saw is the two course are too close to each other. As I was being shuttled from the Pro Shop to the driving range and back I could sense the “money” eyes looking down on me from above (literally, the Red Rock Club house sits higher on a hill than the Arroyo club house) and they were not pleased this common folk had made it so far west. I had the feeling that I was being driven around under secrecy, like I was trying to sneak out of my girlfriends house while her Dad was asleep on the couch. The majority of the staff was great but it’s always the few bad seeds that leave the biggest impression. Being told my name was spelled wrong cause “That’s not how Wangrycht is spelled.” was a first for me. I get a lot of “Never seen that before.”  or “Wow, that’s unique.” but never have I been told I’m spelling my name wrong.  Just for the record my last name is pronounced “Wayne-Right” the “g” in Wangrycht is VERY silent.

I wasn’t going to allow a couple of poor employees spoil my day and I brushed aside the piss poor attitude of a few people and headed out. I was so determined to have a good round that I wasn’t prepared for the bad way it started and in a matter of 25 minutes when, on the par 3 third, I hit my tee shot OB I thew in the towel.

Well ok, maybe not. I was beaten though. Mentally I just couldn’t get myself back into the game. 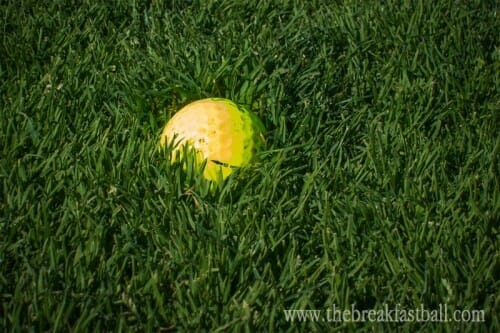 The first two holes went pretty bad but not terrible, at least for me. I hit my first drive of the day left of the fairway and was caught in some pretty nasty rough. After a feeble attempt at recovery, resulting in about 20 yards of added distance, I belted a sweet 7i (a lot farther than expected) but it two made its way left of the fairway and came to rest in the rough. I hit the next shot actually really well. It landed about 10 feet right of the cup and about 10 feet short which I thought was going to give me a great outcome. It was out of the rough so I wasn’t expecting the ball to check up much at all and it didn’t and in a matter of seconds I was 50 feet past the hole off the green and back in a patch of rough. I was stunned at the speed of the greens. That makeshift green we putted on before the rounds was stimping at a 1 compared to the greens on the course. A bad chip shot and then two putts and I had my double. 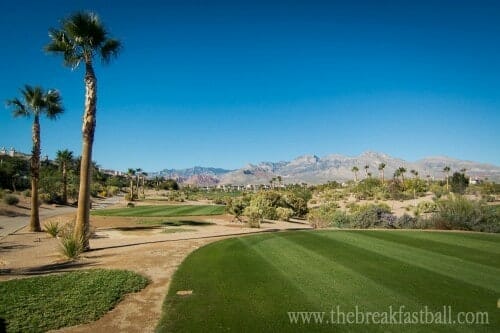 The next hole was more of the same. I hit my tee shot left again but the lie wasn’t as nearly as bad as the first hole. I did have a funky stance though and managed to push a 6i way out to the right leaving  myself a very nasty third shot. From there I had two choices, 1) carry a bunker for about 30 yards to a narrow, downhill, FAST green or 2) pitch it over a tree to the right, avoiding the bunker, but leaving myself a very LONG putt. The ball came to rest on some hard-pan and was concerned that I’d not hit it clean enough to carry the bunker so I picked the safer of the two and hit arguably my best shot of the day. Just when things were starting to look good I hit the piss out of the ball on my first putt and I blew it 25 feet past the hole. Two more putts and I had my first 3 Jack of the day and back to back doubles. Not at all what I was hoping for. Well, it got worse, a lot worse. On the very next hole, a Par3, I hooked a 5i like Bubba hooked his wedge at The Masters and had to play my third from the tee box. A penalty on a Par3 is bad enough but an OB on a Par3 takes the wind out of your sails quick! I was hoping that a 186 yard Par3 hole would have allowed me to stopped the bleeding, calm down some and get back into the game. That didn’t happen and I was off to a Double, Double and Triple start.

That was how the day went. Not something I wanted to do at all, putting up triple digits, but it happens. As embarrassing as it was I have no choice but to search for positive, so after my extensive self evaluation of this poorly played round of golf this is what I’ve come up with.

With all that being said there is a tough road ahead if I want to finish this year off with a bang and bring The Breakfast Ball Cup back home!