There is no butter on this roll!

Let me first start by saying Bandon Dunes Resort is everything you could ever hope it to be… and then some! Seriously, go book it right now!

I’m going to write up an article about my day at Pacific Dunes in a few days but for today I wanted to talk about something that has been affecting my swing in a way that I was completely oblivious to.

Going back as far as I can remember where I picked up a club and started playing golf I’ve been swinging incorrectly. It’s only taken me 20 years to figure it out, not bad right? It wasn’t until I started working with Wade back in December of 2012 that I started to fully understand the mechanics behind the golf swing and even now I’m still being educated daily on the subject. Recently I had yet another revelation (thanks to some slow-motion GoPro recordings) about how my mechanics have been “off” in certain elements of my swing. I’ve been working on the fixes for these flaws and believe I’m headed in the right direction to continue my success of late.

Not to say that I have this all figured out but I’ve made some progress in my overall game going back a few weeks and I wanted to share some of the reasons why I feel it’s starting to show some serious signs of life.

Not to beat a dead horse but I still believe the leading vote getter for why I’m playing better is the fitting I did for my new irons. I’m seeing this in my approach shots via the dramatic decline in triple bogeys over my last several rounds. Since I’ve implemented a more relaxed and less aggressive approach to my shot selection my pars per round has doubled and my penalties per round has plummeted. Yes, it’s only three rounds of data but when looking at all the stats I’ve compiled, those jump out.

It’s true, the irons have been a huge boost in confidence but with this latest “revelation” I mentioned earlier I found a new level of self-assurance in a place I didn’t think was ever going to be possible, the tee box.

Before I headed off to Oregon on my family vacation, I played a round out at Revere with my good friend and loyal Breakfast Ball supporter Dan. I was riding the high of shooting an 83 the last time I was at Revere and I was eager to show Dan how my game has been progressing of late.

Unfortunately Mother Nature had other plans for us and our round was cut short by some pretty nasty monsoonal weather that crept up on us rather quickly. We did our best to push through the adversity but when the lightning started striking very close to the course we called it quits and headed for the bar!

I wish that video showed just how bad the rain was coming down, it was POURING. Since I had the waterproof case on my GoPro Dan said “Come on, let’s just play in this and have some fun with the camera.” He was right, why not have some fun during a really shitty situation. So we did, for a few holes. That’s when the before mentioned lightning halted all the fun and we made our way to the clubhouse.

I did manage to get in some decent footage on the par 5 11th before the sky opened up on us. It may be the most important video of my swing that I have ever recorded. When I showed it to Wade he was literally giddy to show me this flaw I’ve been prefacing. Here is the video:

I stupidly forgot to record the putts. There were two of them; the first one burned the right edge, but I did end up making the Par putt for a decent 5. That was the good news. The bad news was my right foot during the tee shot and also on the approach shot with my 4iron.

You can see in both videos how my right foot gets rolled out onto the outer edge. This flaw basically sucked all the power out of my swing. I lost my coil and any power that I had built up to at that point was immediately lost. You just can’t get that back in the middle of a swing.

You can see the same thing happen with the 4iron. Losing the coil and then relying on my hands and upper body to complete the swing resulted in an off center hit and loss of distance on the shot.

Wade was quick to point out that my pitch/chip shot to the green was as close to perfect as it gets. That was one of the good aspects of the video. Something else Wade mentioned from the video was that I had made Par with two shots that were not executed the best. Wade attributed it to my work on getting into better positions during the back swing. “When you can make two swings at the ball that were not exactly great and still make a Par it shows that you’re doing a lot right.”

Before I watched the video I was happy with the score on the hole, but after watching the video I was actually thrilled with the outcome. Wade was 100% correct, two swings at the ball that had some serious flaws to them and I still made a Par. Even more important though is how it got us talking about my lower body and why I’ve been sucking all the power out of my swing with this “roll” of my right foot to the outside.

I don’t know if you remember earlier this year but I was struggling big time off the tee. Instead of coiling properly I was turning my right knee out and away from the target during the back swing (making my backswing look like a huge sway to the right) and the results were not pretty. Through some video sessions Wade helped me with that issue and I started seeing some better results, but the mind has a way of reminding you that it’s still in charge. Twenty plus years of a dreaded swing flaw doesn’t get eliminated in a few practice sessions. With my focus on keeping that right knee more stable the next chain sequence that brought me back to old swing was to let all the torque I had built up disperse as quickly as possible.

What the hell was I supposed to do with all that pent up energy, it was foreign as hell to me and my muscle memory, hence the right foot roll, the release of all that energy and more fittingly a reversion back to my more comfortable flawed over the top swing of old. I wasn’t having it though, not this time!

Now that I had the knowledge of seeing the flaw first hand (with Wade’s help of course) I took to the garage and put in some outstanding grind sessions working on keeping that right side (more importantly my right foot) more stable. I also went to a more aggressive shoe than the TRUE’s I’ve been wearing. I decided to throw on an old pair of Adidas 360’s I have just to see if I could notice a difference.

Even though I’m a huge fan of the zero drop style shoes TRUE makes, I’ve had a few issues with slipping the last few rounds and when I saw the foot roll from the video I thought it would be a good test to see if a soft spike more aggressive shoe, grip wise, would help.

The difference was astounding. In just the few sessions at home I was making much better contact. Those practice sessions had me really debating which shoes to bring with me to Bandon. The results were too convincing and I ended up bring the Adidas with me for my round at Pacific Dunes.

How’d it go? Well on a not so easy layout in 58° temps, with a 20mph head wind and a patch of fog covering most of the course I managed to hit 12/13 fairways. My distance off the tee was exactly what I was hoping for mainly because the ball was flying ruler straight through the air with no wavering at all! It was arguably one of my best performances off the tee with my driver I’ve ever experienced. 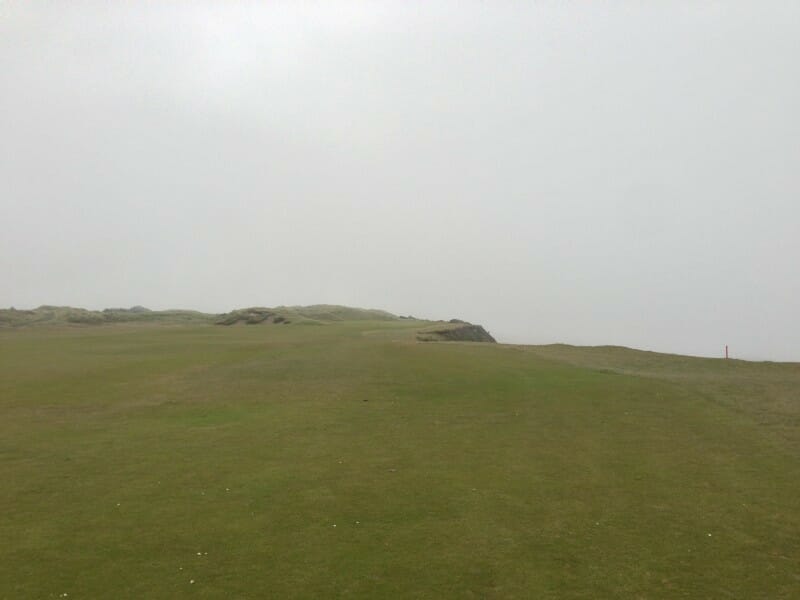 Since returning from Oregon I haven’t even lifted a club. Vacation and logging 2,400 miles pretty much sapped up all my extra energy for practice sessions. I have been doing a short exercise at night before I get into bed that I think is really starting to help make the push off my right foot more instinctual rather than a focus thought. I simply get in my stance, coil my upper body where I feel the pressure building in my right leg and then slowly push to the left with my right foot making sure that push starts the weight transfer and nothing else.

I’m perplexed about what to do in regards to my shoes. The TRUE’s are easily the most comfortable shoes I’ve ever worn on a golf course but I think I might be sacrificing some performance in lieu of added comfort. The Adidas were outstanding but they did a number on my feet. Walking 18 holes in the Oregon dunes wasn’t exactly riding a cart in Vegas if you know what I mean. My little piggy’s took a beating.

I’m going to go back to the TRUE’s for my next practice session and see if I notice a difference, in the mean time I’ll be researching my ass off trying to find the perfect shoe that fits both comfort and performance.