Connectivity, what the heck is that?

Swing changes are a lot like going on a diet. You want change in your life or in this circumstance golf. The change you want isn’t going to be easy because there is no quick fix or pill you can take to make it happen sooner. You’re going to have to put some work into the process. There is going to be a lot of sweat and frustration. It will eventually get easier the longer you stick with it. The end results, after all the blood sweat and tears (yeah, it happens sometimes) make it all worth it.

For the second time in my early golfing career I’m in the midst of a swing change. It’s nothing groundbreaking or revolutionary that will change the makeup of the game as we know it, but for me it’s a change I’m looking forward to and so far I’m really excited.

Before I get too far into what’s going on I want to make it perfectly clear, to everyone, I absolutely love Dustin Simons to death for what he did to help me grow as a golfer and this swing change has nothing to do with anything that I was taught or have learned from him. You may recall reading that Dustin moved back to Idaho earlier this year, and while we have stayed in contact, text message here an email there, it hasn’t been easy for me to ask him for advice knowing he’s a busy guy with much more on his plate when compared to his time in here in Vegas. I did get to spend a day with him up in Idaho at his course, Osprey Meadows (which you HAVE to go to if you’re ever in Idaho) and I look forward to having him as a friend for a long time, even if his is a New Mexico Lobo fan.

That being said let me get everyone up to speed about what’s taking place with my swing changes. Adam , the producer of all things awesome over at www.threeguysgolf.com, said to me the other day that fellow Three Guys blogger Wade has some swing tips for me and was wondering if I’d like to talk to him and hear what he had to say. Now, just a reference point, Adam has said to me on more than one occasion that Wade is one of the nicest persons he knows, a super golfer and that he has an uncanny ability to analyze a golf swing.  At first I was taken back a little, going out and looking for a swing coach or someone to get lesson from is one thing, but having someone come to you looking to help was something new for me. Honestly, the first thought that came to mind was “am I that bad that people are coming to me trying to help?”

Knowing that it’s just not possible to get the help I need from Dustin anymore, I agreed to meet with Wade and talk about my swing.

I spent about 45-minutes on the phone with Wade the first time we talked and overall the conversation was excellent. Wade has a great history with the game and based on the phone call he has an amazing understanding of the golf swing. After talking about his past, his philosophy and what he liked about my swing we started talking about things in my swing that he believes with some work can get my game going in a better direction. Lower scores!

One of the first things Wade noticed was my posture. He mentioned that I’m really bent over at the waist and suggested that I stand taller at address. The other item that was discussed was about how disconnected I was during my swing.

Disconnected? Hmmm I told Wade there has been many things said about my golf swing but I can’t recall ever hearing the words “disconnected” before. I was utterly clueless what he meant by that statement.

A brief history lesson later and I had been fully enlightened on the ideology that is Connectivity. I highly suggest everyone Google’s “Sammy Byrd”  or “Jimmy Ballard” and get a little educated as well about someone who certainly doesn’t get mentioned enough in the lore’s of golf.

If you’ve been following this blog for any amount of time you can understand how easily I get consumed with something, even more so if it pertains to golf.  Wade’s little history lesson intrigued the hell out of me and I was an easy sell. I’m just glad that Sammy Byrd played for the Yankees, had Wade told me he was a member of the Red Sox I might have just daydreamed the entire conversation and never gave connectivity another thought. Yeah, I’m a Yankee FANatic too along with my other mental disorders.

So what is this connectivity I’ve been talking about? I’m not anywhere near qualified to explain the how’s and why’s or it’s important so in short I’ll say this; It’s keeping your arms connected to your body throughout the golf swing. When Wade told me I was disconnected he was pointing out how my arms and hands drift away from my body to the point when at impact I’m reaching out. That reaching out motion is something that has plagued me for what seems like forever.

The easiest way to understand connectivity is to take a towel, just a small one like a playing towel and tuck it under your left arm (if you’re right handed) and use your left bicep to keep the towel in place against your left pectoral muscle. Grab a golf club and take a swing keeping the towel in place throughout the entire swing. That’s connectivity. Prior to my talks with Wade had someone done that drill with me that towel would have dropped to the ground the second the clubface moved the first inch. That’s how disconnected I’ve been.

I was eager as ever to get home and start hitting some balls after our initial talk.  My wife and kids were gone for most of the night so I had nearly 4 hours to myself to get at it. The standing taller suggestion was like tasting a red velvet cupcake for the first time. Yuup, delicious! I was so surprised at how natural the stroke felt. I was so much more in balance throughout the swing and I felt very much in control. The tension I was creating in my hands almost vanished right before my eyes like Wade had pulled of some Copperfield type illusion from 3,000 miles away. Before I started swinging at actual balls I took my towel and did the drill I mentioned earlier. You want to talk about a foreign feeling to me. It felt like my golf swing now had a “HENCHO IN MEXICO” label attached to it. I kept at it though and after about 20 minutes of just taking an easy swing after an easy swing I could start to feel how this was a vast improvement in consistency over what I’ve been doing.

Hitting a ball was not quite as easy. It took a little getting used to but after a while I was starting to get the hang of it and after a good couple of hours of work I managed to run off this little grouping with my 5 iron: 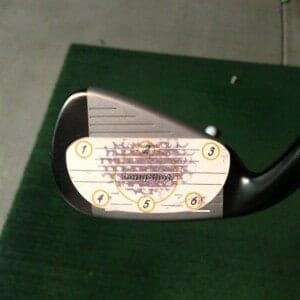 The above photo was from the very first session I had after implementing the changes. I sent Wade some video of that session and he let me know of some other area to work too. My rear end needs to be under my torso more and I’m still swinging with on over the top path. Work in progress that’s for sure, so far though I’m really happy with the ways things are going. It’s still VERY early in the process and I’m sure there are some discouraging days ahead, but just like my diet (down 12lbs thank you very much) the end result is what I’m doing this for.

Stay tuned for more updates as they happen…

Don’t know why but I’ve always wanted to say that.