Because our tee time wasn’t until 12:30 pm, I got to sleep in, thankfully! That doesn’t often happen for me, so I took full advantage. I got up, had some breakfast, got all my clubs cleaned and loaded up the car. 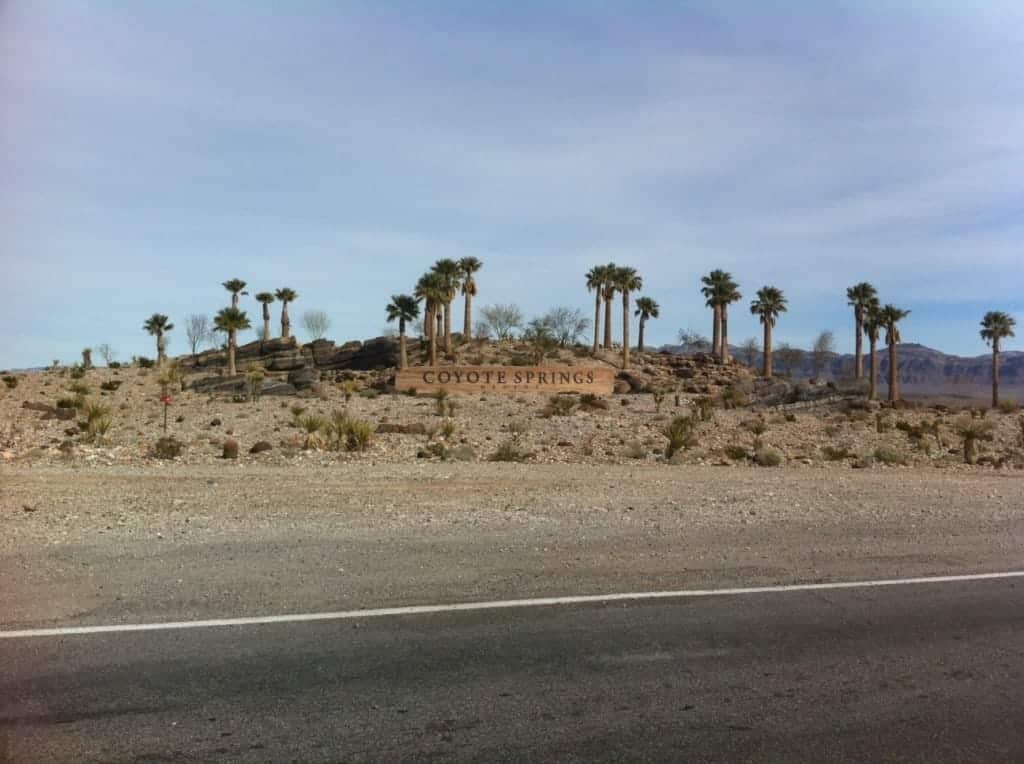 After arriving at Coyote Springs, I checked in and headed out to the range.

The trip out to the range seriously took about 5min. The practice area and first tee will be a lot closer to the clubhouse if and when it ever gets built, but right now it’s a journey. Coyote Springs is in the middle of nowhere north of the Las Vegas valley. There wasn’t any traffic the entire drive, so I ended up getting out there about an hour and forty-five minutes before our tee time. The course is still under construction, kind of like how Conestoga is still under construction.

They have a nice set up though. I think they are planning on being in the trailer for a while because they have done up the exterior to make it look like it is NOT a trailer. I was greeted in the parking lot by some attendants who asked me to pop the trunk and proceeded to get my clubs out and get them on a cart, and that was nice.

The driving range is a thing of beauty.

It’s freaking huge! By far the most significant driving range I have ever seen. It was pretty packed when I got there, and I found a spot near the end, a little bit away from everyone to warm up.

My warm-up started awful. I couldn’t get anything working. The wind had picked up by the time I was stretched and loose. There was a 15-20mph wind coming from left to right across the range. I’m not sure if I was trying to adjust too much for it, but I was driving me crazy. I went back to basics and started my session over with my SW. That helped a ton, I got more relaxed and starting hitting some good shots, finally! The driver was another problem. My attempts at my 3W were lackluster. I was I trouble before I even got to the first tee!!

A good thing for me is about 30min before our tee time it started to come together. Drives were heading straight and the irons we doing much, much better. Still was having a problem with 3W and I should have remembered that because it bit me later on. 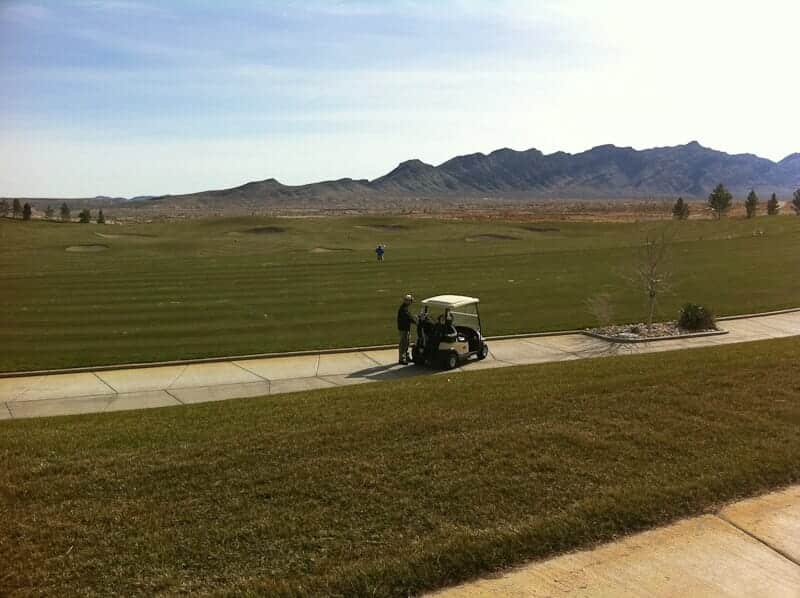 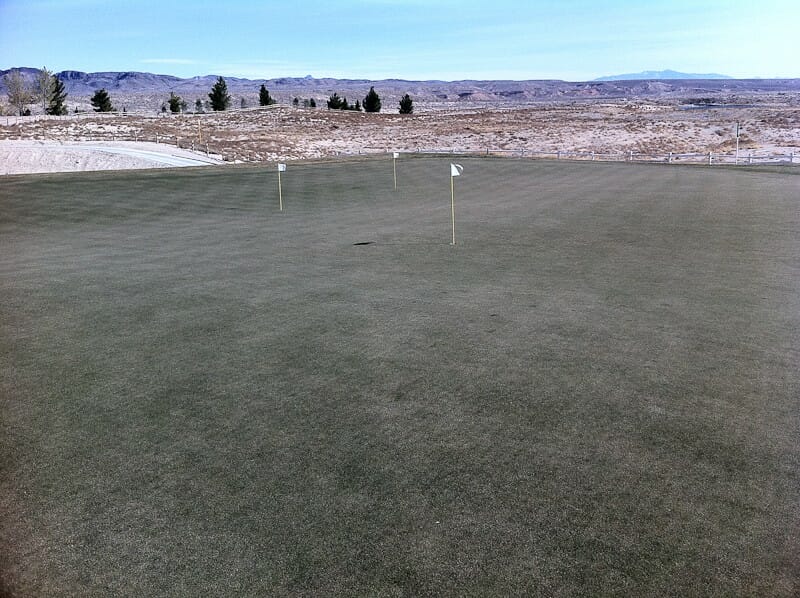 I had high winds to deal with, super fast greens on the course and a course that I’ve never played.

Odds were not on my side that’s for sure, but that wasn’t the unfortunate circumstance we encountered. The course decided to let a group of 12, yes 12 go out in front of us and three foursomes. The problem was they all wanted to play together, and from the start of our round, we had a group of 6-8 in front of us. I have a photo I’ll get up later that has five golf carts and nine people on ONE hole!!

It was unbelievable! I drove over to the putting green and quickly learned what my friends were talking about when they told me the greens were fast. HOLY SHIT!! These things were incredibly fast. The greens were so fast Randy even said if all the holes are like this, this is not going to be any fun. 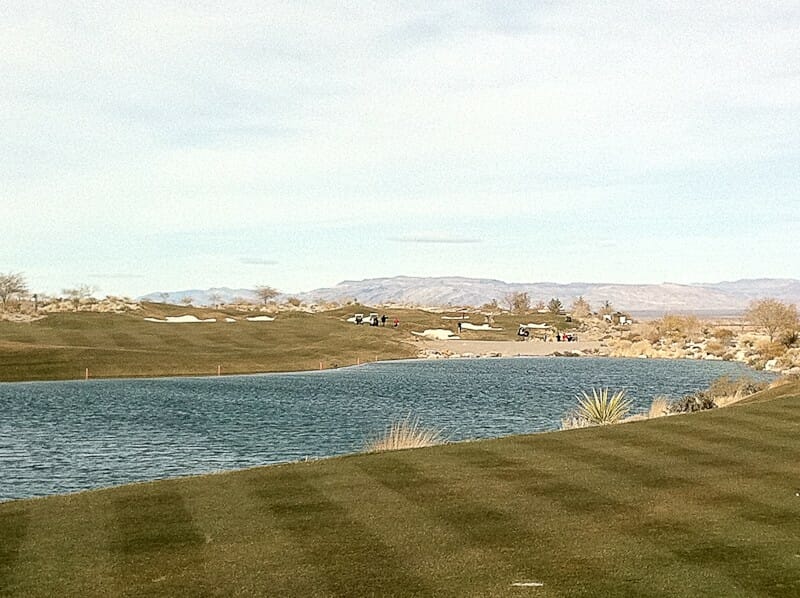 I’ve taken into consideration the new course the wind and the slow play on the front (that group of 12 left after the 9th, there were a lot of complaints called in!) for my poor performance. Not that I would have shot in the ’90s, but it did have some effect on me. I hit my irons probably the best so far to date; they were crisp and had good flight (the majority) I just made some poor choices on the course. That being said and off my chest, I’ll get to how I played. The front started and ended most excellent. I hit a great drive on #1 and

The front started and ended most excellent.

I hit a great drive on #1 and two-putted for par. On the second hole my tee shot found a fairway bunker, and after my nice sand out, I had a suitable approach to the green. There was water right so I aimed a bit too far left and missed the green by a good ten feet. A solid wedge shot and a very lovely putt had me scoring back to back pars! I was off to a great start. The next five holes I don’t need to mention. I’ll skip right to 8 & 9. Par, Par. There that wraps up front. I had four pars and shot 49. Yeah, 3-7 were rough on me for sure.

The back started a little better, then got worse, and I never recovered.

My driver started slicing bad, and I don’t have it in me to try and figure it out while playing, so I switched to me 3W off the tee. I had some great success with it. I was hitting it straight and long. Some holes it was too long, and I carried the fairway, but all in all my play with it off the tee was a success. It saved me from the 110’s!!

For example, twice I decided to play out of the dirt/rocks and attempt a shot I had no business taking. The first one was my second shot, and it went through the fairway and came to rest on some pebbles just after the cart path, it at least a decent lie, so I went at it. If I would have taken a penalty shot and backed up to the fairway I would have had a 110 yard shot to the green, and that’s a shot I’m very confident with hitting. Instead, a punched a PW and left me a nice shot from 60 yards to the green.

My error was choosing a 60 yard shot (which I’m not confident with) over the 110-yard shot. I struck the 60 yard shot with a wedge and caught it thin. It raced across the green into a bush. I hacked out of that and then had to chip to the green. Mental error number 1 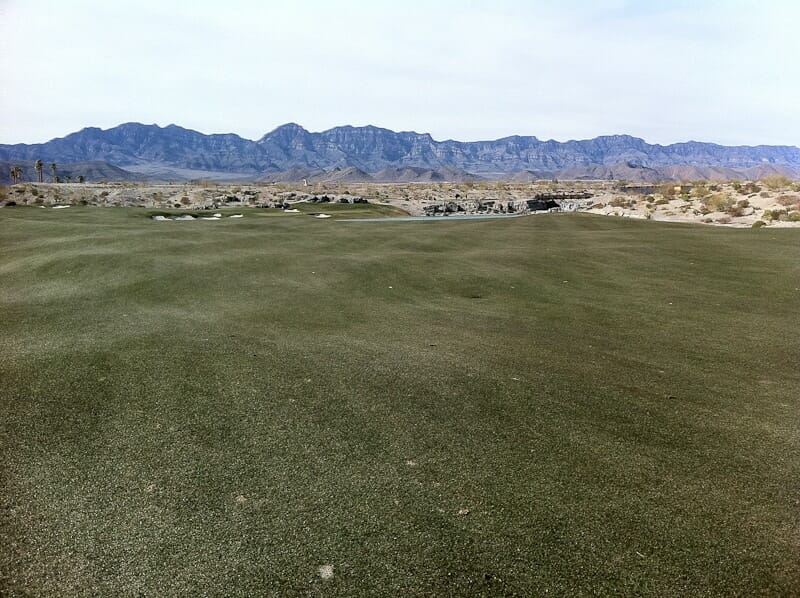 I have to work on my course management.

That is a sure fire way that I can save some strokes. Making the correct play is very important, and that has never been more relevant to me then it is now! The other error came in a similar instance. I again carried the fairway and had a terrible lie with a LARGE rock immediately in front of the ball.

There was water in front and a patch of fairway 90 to the right so I decided to try and get the ball to that patch of fairway. I had my left foot on the rock about 12″ above the ball & my right foot was in the dirt about 10″ below the ball.

I hacked at the ball (I’ll call it hacking cause it was nothing near a golf swing) and it went about 8′ in front of me in a worse position than it was previously.

That attempt went worse, the ball ended up in the before mentioned water, and left me a horrible place to drop. The next shot ended up where the original one as planned, just I was now hitting stoke 6 instead of stroke 3. The smart play was to take the penalty and back up to the grass and hit a 95 yard shot to the green and try to save par. I hit the wedge from the fairway and two-putted for 8. I cost myself possibly four stokes on that hole more than likely 3 with a two-putt but never the less I was a huge mental error on my part.

A good thing did happen as I was loading up the car.

The course manager came out and apologized for that group that was in front of us and gave us all a complimentary round of golf. That was unexpected but very refreshing.

I’m looking forward to playing it again, it is an enjoyable course, and I highly recommend it. Hopefully next time it won’t be as windy, and the pace will be a lot better!