What could have been a day that I reached an achievement mark of breaking 100 for the first time, turned out to be just a bad day on the golf course. I’m trying not to be too upset at what took place today because I did record my lowest round to date with a 100, but the bad taste that’s been left in my mouth is really, really bad.

Things started out bad right from the start. I missed my exit in the freeway, which is embarrassing enough, and that delayed my arrival by about 15 minutes. Showed up got out my stuff and headed into the Pro Shop. After I checked I asked about the range and where to go. I’ve stated before if you’re charging more than $50 for a round of golf I think range balls should be included. We were booked at $60 for this round so I thought for sure the range would be included. Not so, and what made it worse is it’s a two tier facility that’s mats only, and what really grinds my gears (tribute to Peter Griffin) is for non locals its $150 to play this course. I was not impressed at all with their range. Its old, the mats were in decent shape but they have these automated machines that you have to insert a card in order to get it to dispense the balls. I took me three different range stations to get one that worked and would accept my card. There is NO place for your bag, I had to prop mine up against the stupid machine just to get it to stay put, and because the range is right next to hole 9, 10 & 11 and is also next to a major roadway it’s has a very large, very tall fence all the way around it. Makes you feel like you’re hitting in a bird cage.

All that being said I had a really good warm up. I was hitting my irons really well and was smacking the driver pretty good too. I wasn’t happy with what I was doing with the new Hybrid, but such a new club is work in progress in my opinion. I headed over to the putting green next, with only 30 balls to hit I was done on the range “the birdcage” rather quickly. Randy showed up about 10 minutes into my putting and was ready to go so we headed to the first tee to see how it looked as far as getting out on the course.

The starter was a nice gut and let go out ahead of our scheduled time. “Wide open guys, have fun and ah, oh yeah, its cart path only today.” he said. WHAT! That was a surprise no one had mentioned, and off we went.

First hole started out OK, I hit a nice drive (Desert Pines fairways are NARROW as hell, VERY, VERY NARROW I was shocked at the rating and slope I think it should be higher) that came to rest just off the fairway in the first cut. I had 100 yard to the green with a pretty decent lie, I thought. The ball decided it liked the rough more than I did. It was a poorly executed shot by me, and it came up short. My next shot was another horrible lie that came up short too. A chip and two putts later I had a 6. Yuck, not a way to start at all! 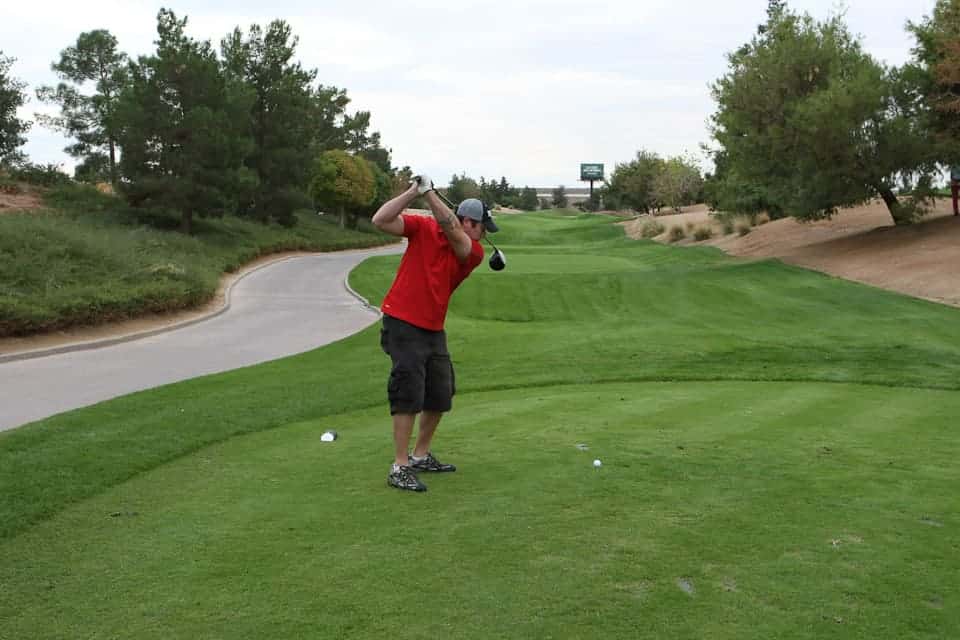 Then it started, the badness. We hadn’t really noticed on the first hole because it’s a basic straight on hole. The problem we found on the next hole and many of them to follow was the yardage signs were all way off, not even close. The scorecard reads that hole two was 190 from the middle tees. We couldn’t find a 190 marker anywhere, let alone a 180 or a 170. Randy stood up on what we assumed was the middle tee box and with his laser finder tried to read the flag. They have nothing on the flags to help laser yardage finders. So Randy focused on a rock behind the green and be guessed about 150 from where we were. There were no green diagrams to tell us where the flags were, no different colored flags to tell us up, middle or back, and they had NO yardage books. They did have an occasional 150 marker, but not enough of them. We were playing almost blind it seemed.

Despite all of that (I forgot to mention running lawn mowers with crew on EVERY F-ing HOLE!) I was having a great round. I was five over through five playing bogey golf. I was on a great pace to breaking 100, and then it fell apart for me on the next two holes. Hole six was a nightmare, I hit a decent drive that went left of the fairway. I was 240 off the tee and that left me with 155 to the green. I hit a really poor shot out of the rough that went right and settled above a bunker on a hillside that left me a disgusting 3rd shoot that was damn near impossible to hit. Uphill, I couldn’t place my right foot where it needed to be, it would have been about 10” lower in the sand than my left foot. It was just bad. That shot came up short, no surprise there, and left me with another difficult lie in the rough downhill with a horrible stance. Needless to say I was pleased that I only scored a 7 on that hole. It was my first blow up hole and I let it go rather well. Focusing in what had taken place at Rio Secco when I missed that one footer.

Then came #7, a par 5, 511 yard hole that is outright straight as a ruler with the right side of the green guarded by a pretty little lake. My tee shot found the fairway bunker, not that big of a deal, but not where you want to be. It was 311 to the green from where I was, and being in the sand it was definitely unreachable for me. The smart play here is to hit a nice 6 or 7 iron out, leave yourself 150 to the hole, another 7 or 8 iron approach and have a putt for birdie or two putt for par. Well screw all that smart play nonsense. My dumb ass decided I had a good enough lie to hit my 3hybrid out and get the ball a lot further down the fairway. I don’t know what the hell I was thinking; maybe it was that incredible shot that I saw Daly hit the day before and I thought I could execute it just as well. HA. Anyway, I made great contact but it came out right instead of left, hit the top of the bunker, which killed its momentum and stopped well short of my goal by about 200 yards! My next shot was just as bad I pulled a 4 iron that crossed the fairway and ended up over a hill in the desert. To my surprise when I got to the ball I had a great lies. The green was very reachable from where I was and I decided to go for it. That was my second mistake on the hole. I hit the ball very well, and it was a great shot, right into a pine tree. Four inched to the right and I would have been sitting nice on the green, I could have only imagine. The ball came straight down from the tree and was in a bad, bad spot. Then I compounded the badness with my next stroke that went in the lake. Penalty stroke and two putts later I had scored a 9. OUCH! Back to back blow up holes and what had potential to be my best front nine score ever.

I shot a 53 on the front and 47 on the back. Which could have very well been a 47 and a 47 and that would have been awesome. I had a penalty stoke on the last hole which made my score end up in the hundreds. I learned a lot with this round. One thing that I have to stop trying to do is make shots that I know I cannot execute. That theory alone could have saved me some strokes today.

I could go on and on about all the bad things that took place while we played. The “Beat the Pro” sham on hole number 8 was an abomination, but I just leave that alone. I vented to the attendant who cleaned up or clubs and he said “Please go in and tell the Pro Shop what you just told me.” I was ready to go, but Randy convinced me that we needed to go in and say something. I’m glad he did. The person working the counter was the CEO of the golf course management company that run Desert Pines and he was really, truly sorry for all that had happened. He let me vent and was kinda surprised at some of the things we had mentioned. He gave me his card and said to call him and he would make it right. So we’ll see if anything ever comes out of that.

To wrap it up. I liked the course, it was very challenging, and a lot of fun to play. The fairways are very narrow and forced you to make a good tee shot. If not for the piss poor range, the bad yardages on the scorecard and tee boxes, the lawn mowers on every hole and telling us it was cart path only as we teed off, the score would have been higher. For the money though, not a place I plan to play again. They would have to make some serious changes before I go back.