A few good things happened this past weekend out at TPC Las Vegas; my score unfortunately wasn’t one of them. My good play over the last handful of rounds seemed like an anomaly when compared to what took place on Sunday. The good, well, I putted fantastic. The work I’ve been putting in to get a more consistent stroke really paid off. I logged 30 putts with only one 3-putt and left at least 4 putts at the cup. The only other good thing that took place was I got to spend the morning hanging out with some good friends playing a course that I could finally cross off my Vegas Bucket list. 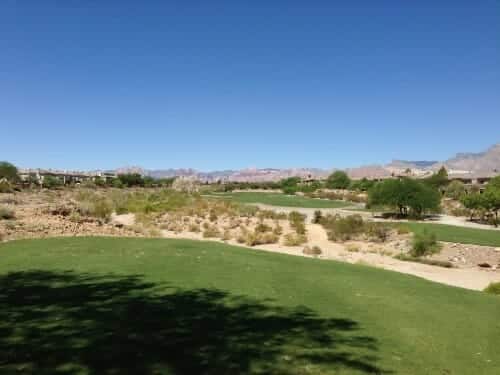 I had a feeling right out the gate that things were not going to be good. It all started with my warm-up session. Through the first couple of clubs everything went really well, but as soon as I made my way to my Driver the bottom fell out.

Push right, push right, push slice, push slice! WTF. As good as my driver has been over the last month this was the last thing I was expecting to see. What compounded the problem was I had about 20 balls to warm up with. That’s a huge pet peeve of mine you might recall. I loved everything about TPC Las Vegas. The staff was awesome, the practice area is incredible, and the greens were all pretty much identical as far as the roll and they have the coolest drink stations I have ever seen. But, for claiming to be a PGA experience I don’t understand the tiny bag of balls to warm up. Maybe the majority of their clientele need only a handful of balls to warm up but I’m nowhere near that level. Frustrated about as much as I could be I headed over to the chipping green to get some more work in.

After chipping and putting, which went excellent, I asked the starter for some more range balls and aggressively went back to work. What really got to me mentally was trying to figure out what was going wrong and that is not where I wanted my mind to be. I wanted to be relaxed calm and confident as I headed to the first tee, not in a scrambled state trying to eliminate a swing flaw.

The first three holes I played at +2, they went Par, Double, Par. The double came on a par 3 island green that I missed left and had an unplayable from the desert. I was so upset with that shot, I was pin high but nestled right up against a 10’ high wall of rock. The lie was great but even with a 64° wedge (which I don’t have) there was no way I was going to get up & down from there.

The next three holes pretty much ended my round they went; Quad, Triple & Double. Yeah, OUCH!

The fourth hole I just completely had a mind meltdown. I hit a great tee shot in almost a perfect spot. Thinking I was a graduate of the Paul Bunyan school of blasting a 3W I stupidly decided to press my luck with a club that doesn’t particularly like to do what I want it to do and ended up doing the unthinkable. I whiffed. Yuup, whiffed and moved the ball about 3”. Guess it wasn’t a complete whiff, but the least amount of contact ever made with a 3W is what happened. So, did I do the right thing and put that club away and pull out my 5I which is what I should have done in the first place? NO! Why would I do that? I used the same club and hit the ball 30 yards into the rocks, and then after my drop I hit my 6I back into the rocks. I did manage to hit a great chip shot and made the putt, but the damage had been done.

Another penalty on the 5th and a ridiculous flyer out of the sand on the 6th, wait I have to talk about that one.

My sand play has always been one of the better facets of my game. It’s always allowed me to go for a shot that I might not normally go for because I have no fear of the bunkers. It helped that TPC Las Vegas has some really nice bunkers! The lie I had in the flyer I mentioned was not bad, it was sitting uphill, and not buried by any means. I had a great stance, practically perfect for the shot and I had about 30 yards I needed to carry to get into a decent section of the green for a makeable putt. I used my 56° wedge and was shocked when the ball jumped out of the sand and flew the green buy a good 30 yards. A full swing in a premier lie on the fairway I hit that shot 95 yards with my 56°, this one, out of the sand on an uphill lie went close to 70 yards? That stumped the hell out of me. How I managed to get that ball that far is still a mystery.

I finished the front nine going Par, Par & Double. The double came on another bad sand shot. All in all though after what happened I was feeling pretty good.

Believe it or not, the back nine was worse. My erratic driver amplified its erroneous ways and the penalties quickly began to stack up. It wasn’t until the 15th hole, after another tee shot into the hazard that I got an idea about what I was doing so poorly.

It all started with my address. I had reverted back to my old swing from last year and had my entire upper body locked in and stiff. Arms, shoulders, hands it was all a tight ball of tension that was preventing me from doing anything correct.

Why it took so long for me to realize it is befuddling. I hit that first tee shot on the 15th and instead of taking my lateral I hit from the box again. This time when I addressed to ball I just became so much more relaxed and I felt the tension in my elbows go away. Light bulb!

It’s taken me nearly 6 months to realize how tension free a swing needs to be to function properly. It’s something Bill has been telling me for years and it’s one of the first processes I went through with Wade. We started with having some flex in my elbows at address and at first the feeling was completely alien to me. As time went on though I understood that if I was going to get into the correct position at the top I had to be in this setup. It’s worked too, my length off the tee has come back and my accuracy off the tee has been a lot better, minus Sunday of course.

With my second shot on the 15th I hit my best drive of the day and repeated it on the 18th as well. You don’t know how happy I was that I was able to figure out what was going on. Had I played the lateral and not hit again from the box who knows how this post could have ended up.

I’ll take my excellent putting and decent chipping as the positives from the round and look forward to the next time I tee up and most certainly the next time I tee it up at TPC Las Vegas! I can guarantee you this; you’ll never see me with tight, locked elbows on the tee box ever again!