My return to FootJoy has been a pleasant one.

I’m going to get straight to the point and begin at the end. FootJoy shoes are back. They’re back in a big way too. Growing up, I always wore FootJoy shoes. During my competitive years, I wore the same pair of FootJoys to every tournament. They were my good luck, charm. They were the old school looking FJs with a purple saddleback, my initials on one of them and a four-leaf clover on the other. When it was finally time to retire those shoes, I can’t even begin to tell you how sad I was. After years of competitive golf, I didn’t play for a good three years. When it was time to pick up the sticks again, I looked around for my beloved golf shoe and discovered something shocking. The new FootJoys at that time were ugly.

They were entirely uncomfortable too. In that time, brands like Puma, Adidas, Nike, and Under Armour had completely taken over the market. With the emergence of Rickie Fowler and his now retired (bless!) all orange look, Puma was making golfers think twice about a brand that most would agree had been left in the early 2000s in a Missy Elliott’s music video. Seriously, look one up on YouTube and see how prevalent that Puma brand was in 2003. FootJoy’s were still on the market, but boy they were ugly.

Fast forward to the present day with my FootJoy Pro/SL shoes.

You’ll find FootJoy putting out some damn good looking, and comfortable shoes. Many tour players wear FootJoy these days. FJ has cornered the market on the PGA tour with the likes of Ian Poulter, Patrick Cantlay and Angel Cabrera all wearing the brand. FootJoys website boasts that they’re the number one shoe in golf. After wearing my current FootJoy’s, I believe them. 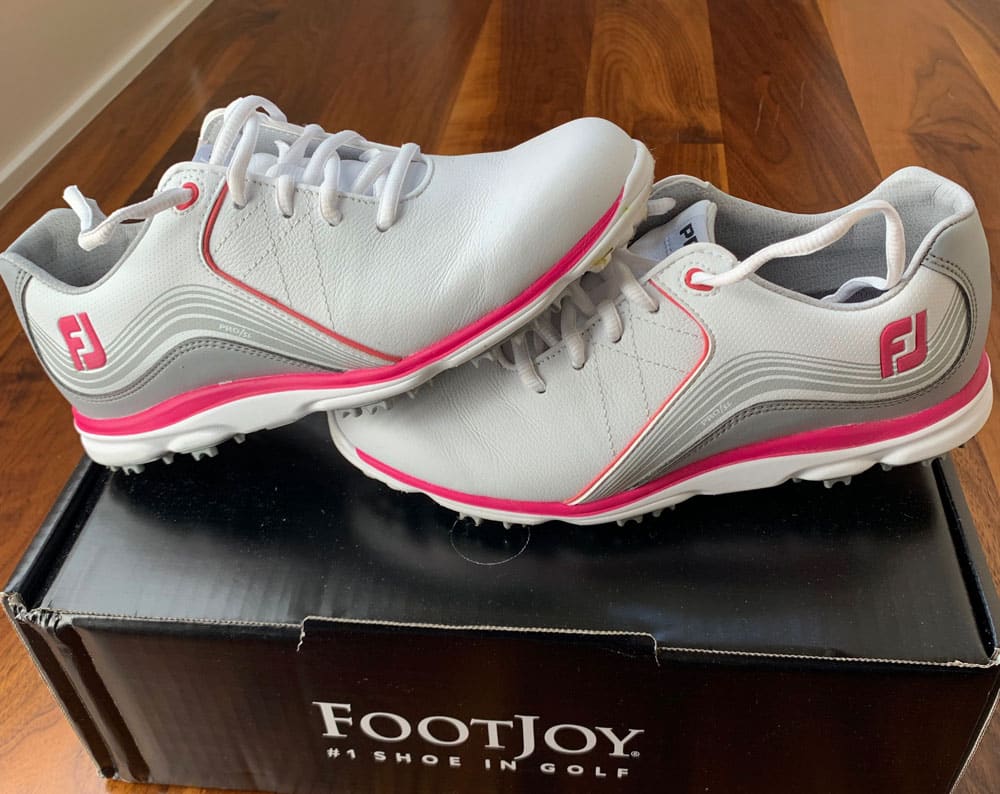 These shoes that I speak of are the new women’s Pro/SL line.

The White/Grey/Pink colorway is where it’s at style wise. I’ve been wearing these shoes out on the course for a full month now, and I’m not sure I’ll ever go back to another brand or another shoe. They’re not spike-less, but who cares? The spike-less trend in golf shoes is overrated in my opinion, anyway. Spikes are the best way for me to maintain my balance in my swing. 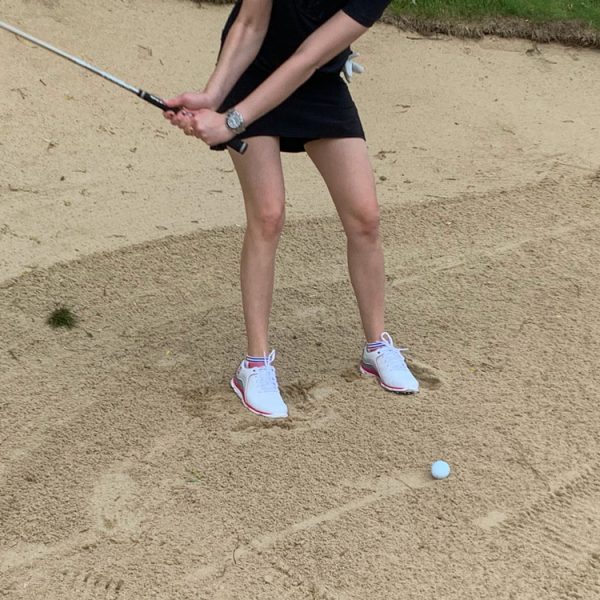 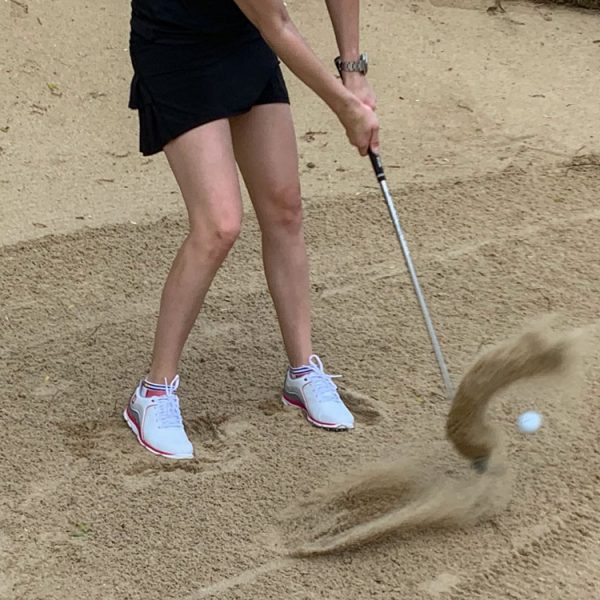 The shoe itself is very light. It almost doesn’t feel like you’re wearing golf shoes they’re so light. According to FootJoy’s website, they have some patented technology that makes them this light. I can tell you that having owned a few pairs of Nike golf shoes, this is important. Nikes tend to be a bit heavier.

I dig this colorway. The White/Grey/Pink option for women is the best looking in my opinion because it has a touch of pink, but the entire shoe isn’t pink. It’s dominated by the white, which makes it look good out on the course. I’m always going to love a beautiful white shoe (no offense, Phil but your all black shoes make you look like an older man). FootJoy even has an option to customize your colorway on the shoe. As I write this, I’m thinking about ordering another pair and opting for the customizable shoe. I could even make them look a bit like the shoes I wore in high school. Maybe if I did that, my putting would be as on point as it used to be.

One downside to the customizing option is how you can’t personalize the shoes, which is a real shame. I’m talking about adding initials. FootJoy should bring that option back for every customizable shoe. In the custom game, you should always be able to put your initials on it someway or another.

The Pro/SL shoes are true to size. I ordered a 6, which is my standard shoe size, and they fit me perfectly. The toe box has exactly enough space for my toes, so getting a medium width variant was the perfect call. It’s crucial to know these shoes come in narrow, medium, and wide widths so you can order the best fit for you, without having to try them on. Not many other golf shoe companies offer this, which is a nice feature. The Pro/SL shoes are for walking in the way the padding is configured, so no matter your style, be it riding, pushcart or carry, you’re good to go. 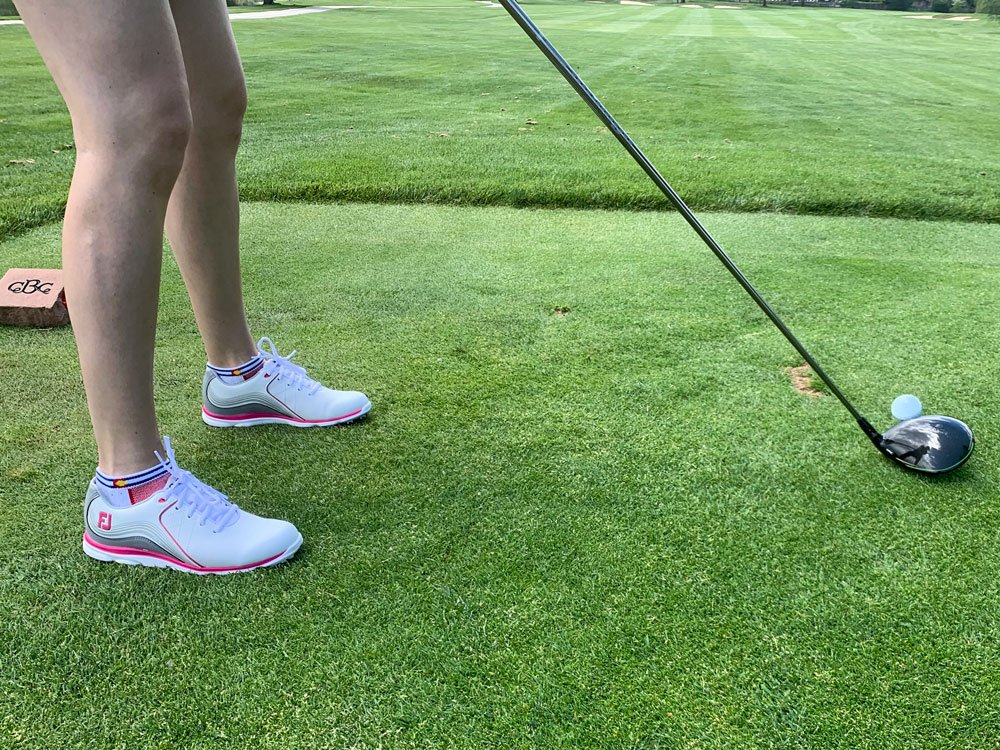 The soles are excellent as well. It has precisely the right amount of support to ensure you don’t slip while you swing or walk. I’ve certainly had other golf shoes that don’t provide such a luxury in the soles. The leather is the perfect amount of suppleness to make sure that you can break in the shoes, but they still look brand new because they don’t crease a lot in the toe box. You’re getting quality and premium features in a golf shoe that a lot of other companies rarely dare to consider.

The entire shoe is premium leather which, to me, makes it feel like a proper golf shoe. It also means its waterproof. The waterproofing is one of my favorite features of these shoes. Living in Colorado, weather conditions can deteriorate at the drop of a hat, and no one wants to have soggy golf shoes in the middle of a hail storm.

Compared to others in this space, the FootJoy Pro/SL shoes are a little higher priced than average.

Now let’s talk price. Retail for the Pro/SL is $149.99. If you want to customize it, that’ll cost you an extra forty dollars. Compared to Nike, these are a bit pricey unless you’re going to go with the Nike Air Max 1, which are the same price. The only shoe more expensive than the Pro/SL is the React Vapor 2, which are $175. Most of Nike’s women’s shoes are in the $80-$130 price range. The shoes that Michelle Wie wears on tour are $80.

Compared to Puma, these shoes are also pricey. The Puma Ignite Blaze Disk shoes run at $120. The Ignite Blase is Puma’s most expensive shoe, for women anyway. I own a pair of the Ignites, and they’re certainly not as comfortable as the FootJoys. 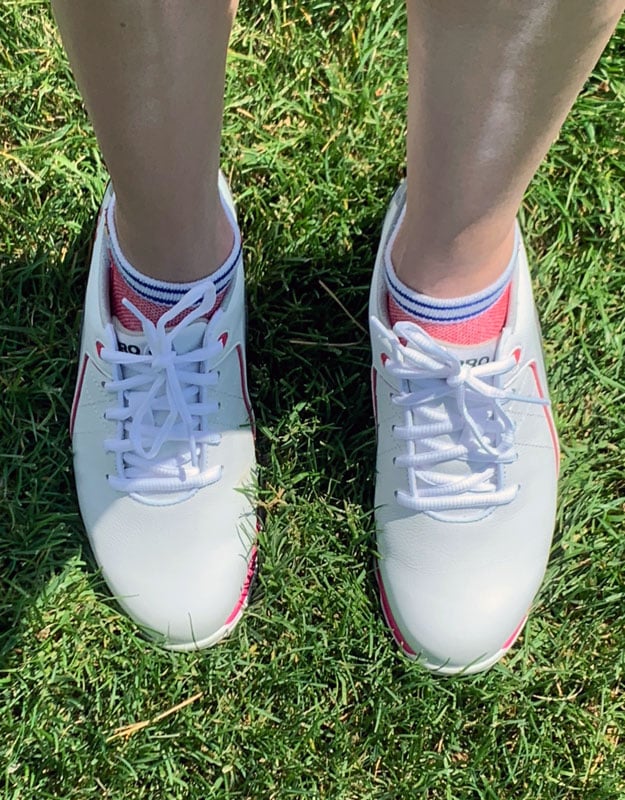 Why might the FootJoys be more expensive? Because they last forever. They’ll get you through more rounds than any other brand on the market likely will. Are they as flashy? Absolutely not. Is their quality better? Yes.

FootJoy has stepped it up of late and has a versatile line now.

These FootJoy Pro/SL shoes are versatile and are for everyone in the game. They appeal to a younger market, but they also appeal to an older market as well. They look good on everyone. How do I know? Because my mom ordered a pair after she saw mine and she loves them just as much as I do. FootJoy knows the game of golf. They know that they can’t just appeal to men. Some other companies, I’m not so are aware of that. Nike will not release their shoe packs created for tournaments like the Masters and the PGA Championship to women, which is a complete shame.

FootJoy Shoes are no Air Jordans, but in the same regards, the Jumpman line is not a FootJoy.

According to FJs website, they’re the number one shoe on the PGA tour. Why do more tour players choose this brand? Well, I think it’s because they’re not too loud, they get the job done, and they make you look and feel like the real golfer you are. Although you could never tear me away from my Jordan’s while not playing golf, it’s a shoe you’ll never see me wearing on the course. Last summer, on a trip to Ireland, I had forgotten my golf shoes and had to wear a pair of Air Jordan 1’s for 36 holes. I think I had about 36 blisters on my feet afterward. Thus, you won’t see me putting spikes on any of the many pairs of Jordan’s I own anytime soon. 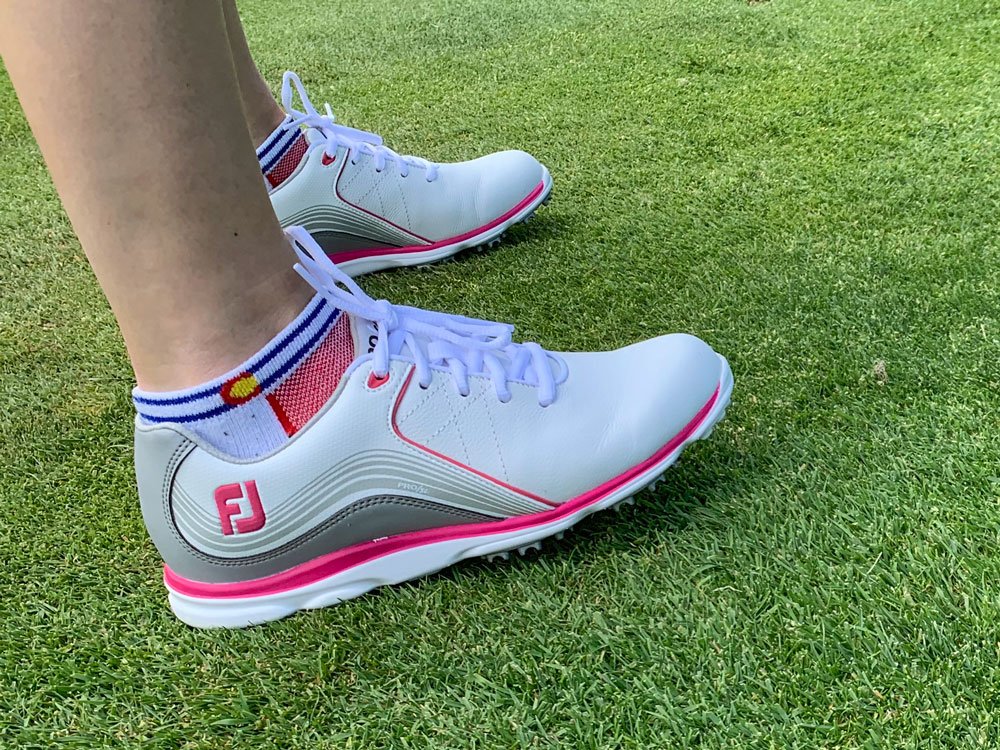 Nike knows that women will wear most, if not all, of the basketball shoes they market, but they never come in women’s sizes. In case you were wondering, all my Jordan’s are young boys’ sizes. Maybe I’m the exception rather than the rule, but I think Nike has a mostly untapped market when it comes to those awesome shoe packs that everyone and their mom (well, not really) tries to buy when they drop. I would game those shoes on the course. Until then, I’m gaming these FootJoys.

OK, FootJoy, a Sandal and a Boot?

The only thing FootJoy might be guilty of in the design department is the spiked sandals and the golf boot. Yes, I said a golf boot. Suitable for winter, perhaps? If you’re playing in the snow, we’ve got more significant problems at hand, however. I don’t know who wears either of these shoes. They do have rave reviews on the website though, so there must be a method to the madness that I’m missing. If you’re wearing the sandals and you end up in the bunker, I would think you’d have sand between your toes for days. 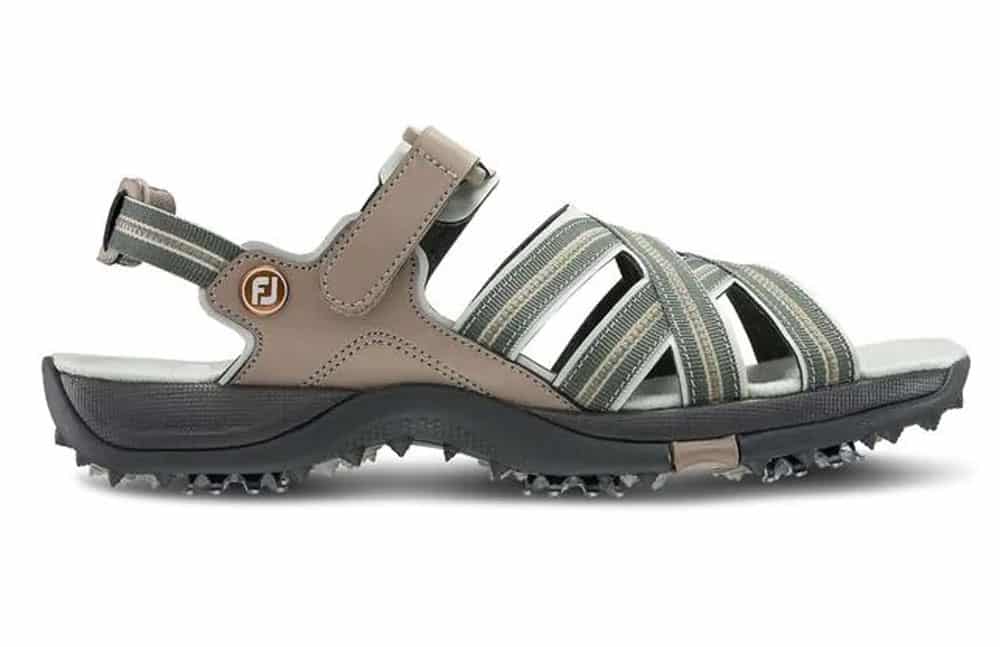 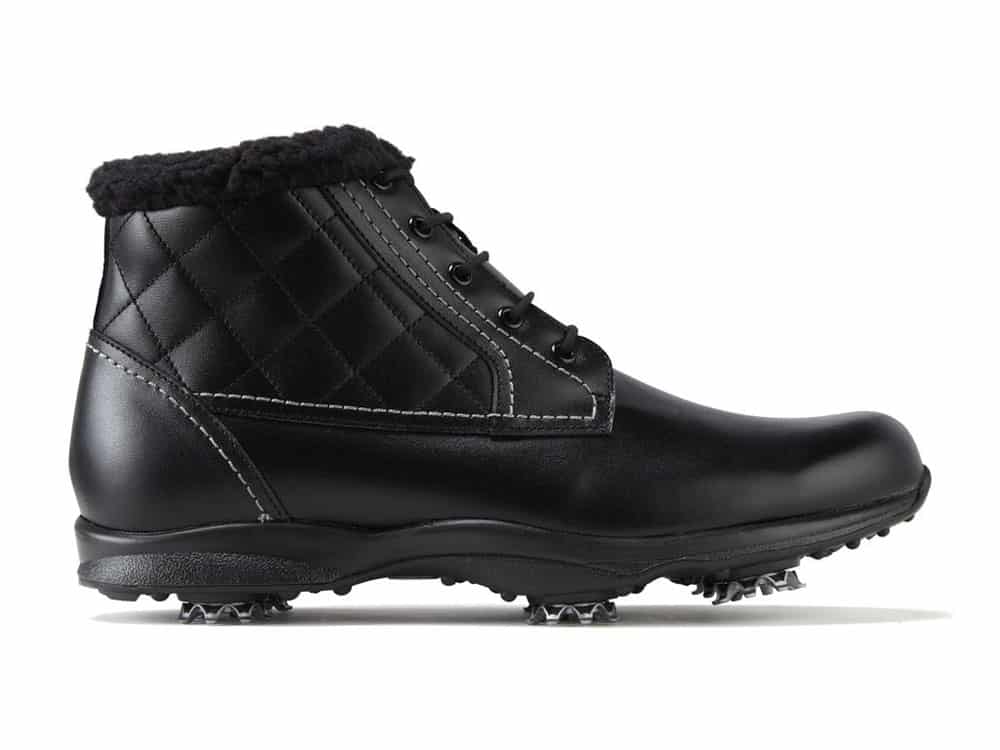 Regardless of the other shoes, FootJoy sells, the Pro/SL shoes are a massive win for the golf shoe market. If you’re #1 in the game of golf, you must be doing something right. I wholeheartedly agree that they’re doing everything right with these shoes.

It’s been a JOY to get to know the FootJoy Pro/SL shoe.

Fit, Function, and Style, FootJoy has a winner on their hands with the Pro/SL line.

For additional information on the Pro/SL head on over to the FootJoy WEBSITE and see what else they offer in their Women’s line of products.

Also, be sure to follow along with their social media pages: 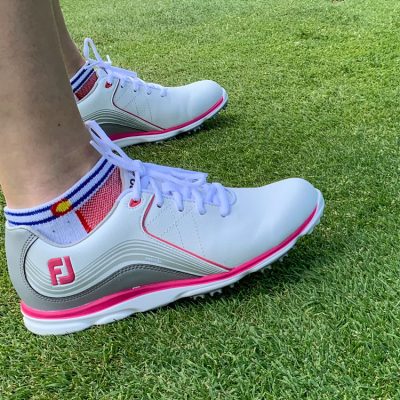 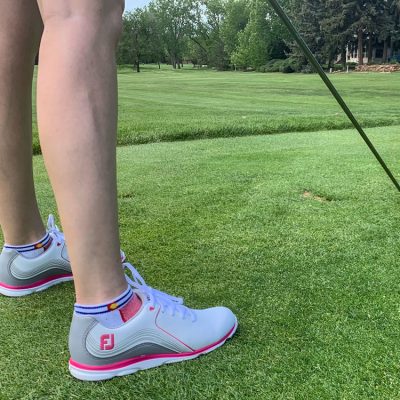 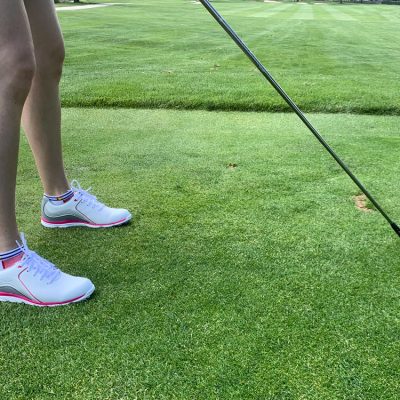 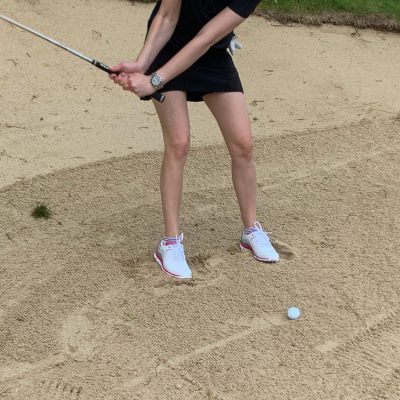 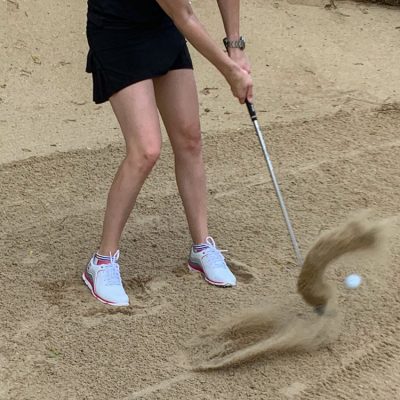 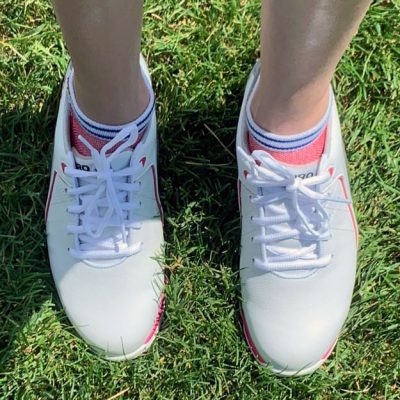 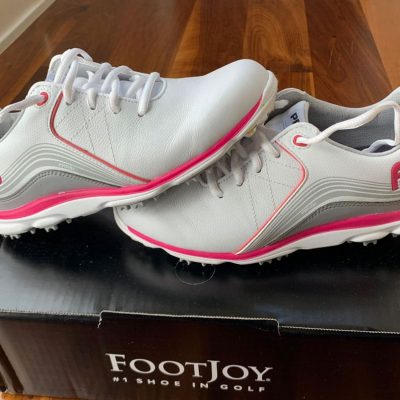 Born and raised in Colorado, I will be contributing to the Breakfast Ball with reviews centered around women's golf gear. Having been around the game for almost my entire life, I love the game of golf, and I love to share my passion with others. In my spare time, I attend law school. However, making a little money out on the course is way more fun. Who says I can’t do both?