Full swings are exciting and so is practice!

I’ll repeat it, full swings are exciting especially now that I can practice again!

It seems like it’s been forever since I’ve taken full swings. There’s nothing like the end of a three-month layoff. This past weekend I hit the range for the first time in 2015 and had myself a phenomenal practice session.

The last time I’ve played was back on the first of November. I know, awful right? Adam (threeguysgolf) said to me the other day

“How in the hell have you not played golf in 3 months and you write a golf blog.”

Believe me; it was not by choice that my layoff went on for too many weeks. Much more than I had initially planned.

November was full of activities for my kids, mainly soccer tournaments nearly every weekend. My vacation the week of Thanksgiving turned into “Let’s get all the crap done we never have time for” type vacation.  Before I knew it, December was here.

More soccer activities added to the layoff. Then my youngest’s birthday party filled up every weekend possibility of getting out and playing. I was able to practice at home some, that’s been a godsend, but it was limited. My only other saving grace was the completion of my backyard.

The Backyard green is rolling.

The putting green has been way more beneficial than I had ever imagined. On top of that our winter, at least so far, has been anything but brutal. Aside from a few days over New Year’s, it’s been a very mild winter, and that has made the late night putting sessions perfect!

Just when I was able to free up some free time before the holiday season, I came down with this nasty flu-type bug that pretty much wrecked me. Massive headaches, sore throat, running nose you name it I had it. I felt like a walking billboard for a Nyquil commercial.

The majority of my symptoms went by the wayside relatively quickly but my cough hung around for the next six weeks. As I write this today, it has been about five days since I last had a severe coughing outbreak. Something I haven’t been able to say since the third week in December. Damn stupid cough!

Once I was feeling better, I started looking forward to the weekends just itching to get out there and play. But, instead of heading to the course one sunny afternoon, three weeks ago, I decided to do some work in the backyard. Just some minor maintenance on the green and getting the majority of the outlining green lights in place.

Not sure if it was the hammering in of the lamp stakes or moving around of some boulders. But I tweaked my elbow and re-aggravated an old tennis elbow injury that put my golf game on a serious hiatus.

I wasn’t a fan of not being able to practice. Not having the time is one thing but having the time and NOT being able to take a swing is depressing as hell! I didn’t even touch a club for two weeks before I decided to give chipping and to put a go. Thankfully the stress placed on the tendon at my elbow was minimal. It wasn’t “pain-free”, but I was able to tolerate it enough to get in a few sessions here and there when time permitted.

Those late night putting and chipping sessions have been my saving grace. Being able to go outside and play, even though it’ only been a small portion of golf, has allowed me to maintain some sanity and a little relevance to the game. 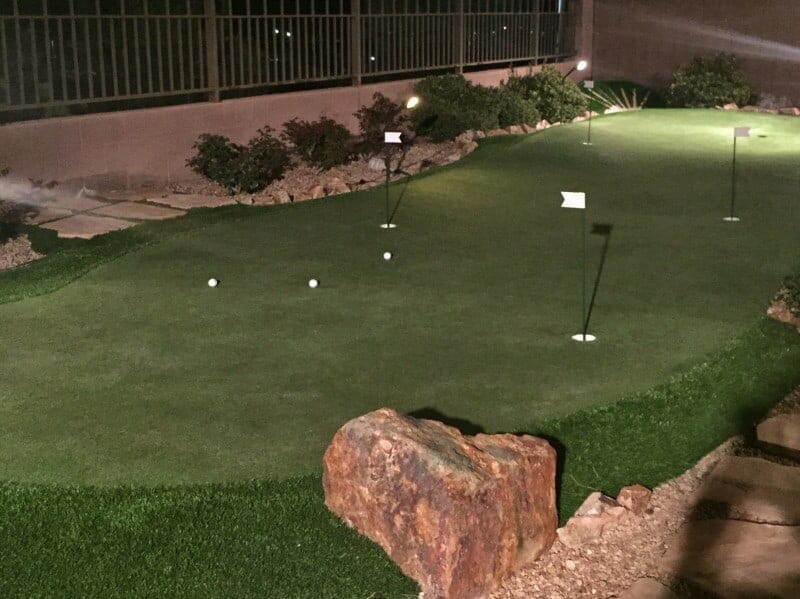 Before I knew it 14 weeks had passed since I had taken a full swing with intent. I did mess around with a couple of 7iron swings when I was caddying for Andrew but nothing serious. As a player trying to get better, the last thing I wanted to do was take a 3-month layoff. Sometimes though, you just have to go with the hand that’s dealt you.

This past weekend I took advantage of the incredible weather (sorry my northeastern friends) and headed out to the TaylorMade Golf Experience and went to town on two large buckets.

Some good things took place that night, some excellent things! Because I haven’t been taking full swings I was a little paranoid the disaster swing was going to show up and all the work I had been putting in since June of last year was for nothing.

Getting my hands out of the way was crucial for resuming full swings.

I’m going to go back a little to help explain the session better. Right before my last round, I played in November Wade, and I had a couple of very good Skype sessions where we worked on a few small changes in my swing that were now obtainable. The portion of the swing we focused on was at the top through impact.

You might recall when I talked about learning the Ballard swing from Wade one of the very first things we worked on, concerning the swing, (my posture and grip were quite the catastrophes as well) was eliminating my hands. I had a VERY hand involved swing, and it took me the better half of a years’ worth of practice sessions to get those hands to stop overpowering my swing.

Taking the hands out of the swing helped me focus more on the bigger muscles. It was a change that like I said took a while to adapt to. It has been a frustrating change, but it has been for the better. My ball striking is so much better now, and my misses are slowly starting to fade away and not be the dominant factor in my scores.

To recap I’ve gone from a very hand heavy swing to one where I’m no longer allowing the hands to overtake the swing. No hands in the swing to me have meant not very much lag in my swing, and by not very much, I mean none. Occasionally I’ll get a hold of a swing and for me, crush a ball, but it not too often. Wade saw how I was maintaining the lack of hands throughout the entire swing and that’s where the focus point, the top through impact, started.

I was nervous, to be honest. I’ve put in a ton of work getting my hands to not be a part of the swing, and now I was being asked to bring in a move that reintroduced the hands. Even though it’s marginal at best the idea scared the hell out of me.

It was a simple thought from Wade that eased all my anxiety though… Just relax your hands at the top and let them come down more naturally. Coming from the “Over the Top School of Golf” this concept was just a little foreign to me. The change wasn’t nearly as bad as I thought. To my surprise, I think the layoff helped.

How can 3-month layoff help the golf swing?

Now I/m far from a theoretical golf statistician. But, I do think not being able to practice my swing change for the last three months made the transition that much easier.

I say easier because my range session Friday night was outstanding. There was no way it felt like I had taken off so much time from full swinging and that was a significant relief!

Without any doubt, this session I had was the best I’ve ever hit a golf ball. I hit my irons as straight as an arrow. As I made my way through the clubs, I was blown away by how well I was striking the ball.

The longer clubs, fairways woods, and the driver took a little bit more time to adjust. But, by the end of the night, I was grooving them as well. Walking to your car after leaving the range knowing you just rocked the hell out of that session is a great feeling.

Such a great session tonight. Lights are off, time to go home. #golf @taylormadegolfexperience

With my confidence flying sky high right now I’m so eager to get out and play. It’s killing me knowing I’m going to have to wait until this week to get out.

There is some good news. With practice sessions in full swing and my game in decent shape, considering the layoff, I’m feeling good. Plus, I’m going to play one of my favorite courses in town, Las Vegas National. They have the GolfBoard available for patrons, and YES, I will be partaking in using one no matter how much Andrew Ganey hates them!