For me there’s nothing more exciting than an awesome golf store. Just read my review about the amazing store out in Mesquite, Ready Golf & Gear and you’ll see what I mean.

Going back a few months, June for the perfectionist that read the blog,  the residents of Henderson, along with the Vegas folks, were graciously greeted with this sign outside a once former Circuit City building. 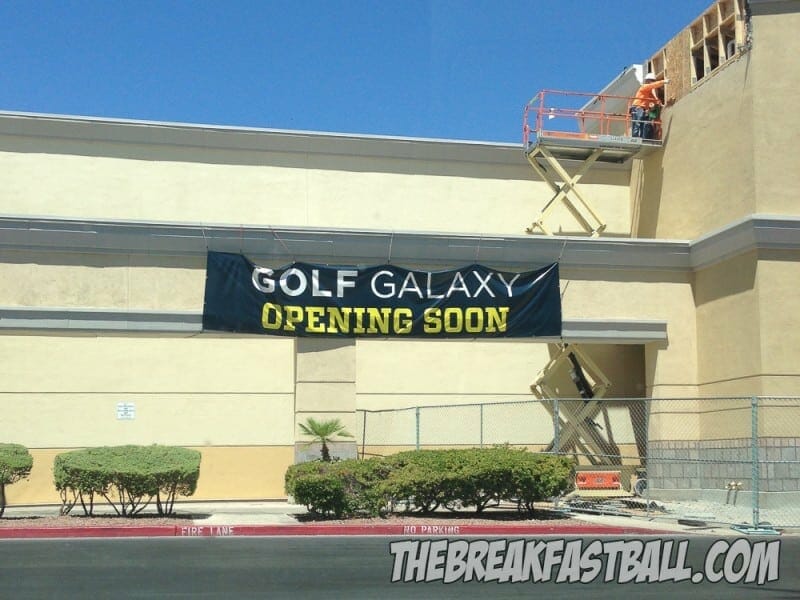 Ever since that day back in June, I have been anxiously awaiting the grand opening of the newest Golf Galaxy store to hit the Vegas Valley and more notable my home town of Henderson.  Finally, this past weekend, the arrived and we now how ourselves and wonderful golf retail store to be proud of.

For years the Vegas valley has been a bust for golf retailers. One of my favorite shops in town, a tiny little place in a Wal-Mart shopping plaza closed down when the economy tanked and since then I’ve seen a good handful of stores close their doors because the business just wasn’t there. Because of that I’ve been left with a few stores that do have a good selection but just don’t have the pop or wow factor that I think helps with this town.

This isn’t our only Golf Galaxy in the valley, there is one located on the west side of town but, for me, the drive is long and the store is tiny compared to the mega stores the PGA and Golfsmith put out there, so when I saw that they were taking over a former Circuit City building I was excited that maybe, just maybe we would finally have a golf Mecca here in town.

The store is amazing from front to back and as I walked through checking out the facility I was so impressed with not only the items they carry but the amount as well. Bags, Balls, Clubs, Clothes, Shoes, Clubs, Accessories, did I mention clubs?

The layout is perfect and the store is very VERY large. With the front have mainly dealing with the apparel side the rest of the store is dedicated to what I was most interested in and that’s the gear!

In the back of the store there are four manufactures custom fitting stalls and the star if the show is the Callaway booth. I spent a good twenty minutes discussing the inner workings  with one of the engineers from Callaway and when it was all presented to me I was in shock at the amount of technology  that Callaway has put into this booth. 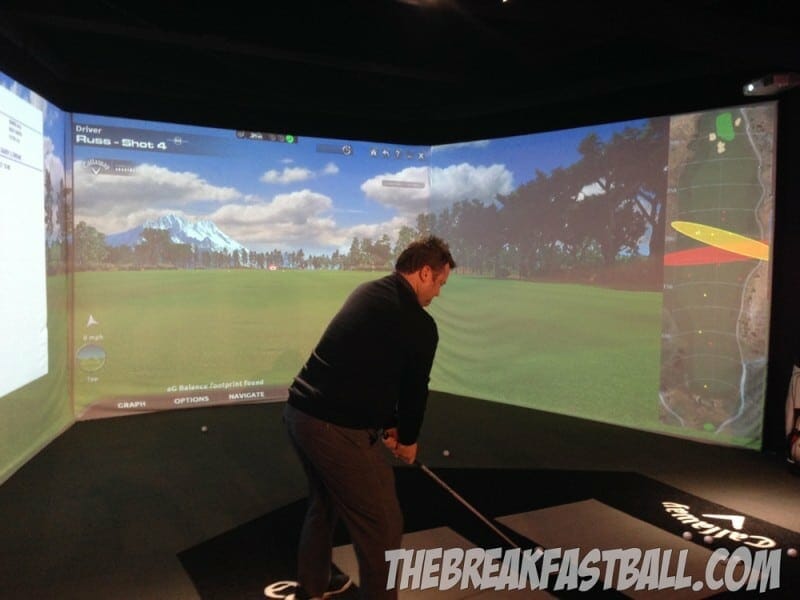 Above you can see the booth is rather cool. Three screens provide so much information you feel like the entire Callaway staff is on hands helping you with your fitting. Below is one of the more unique features I’ve ever seen in a fitting booth. There are projectors that fire down on the floor that can provide you with video playback, foot pressures and what I have pictured here the path of the club through impact. Unbelievably cool!! 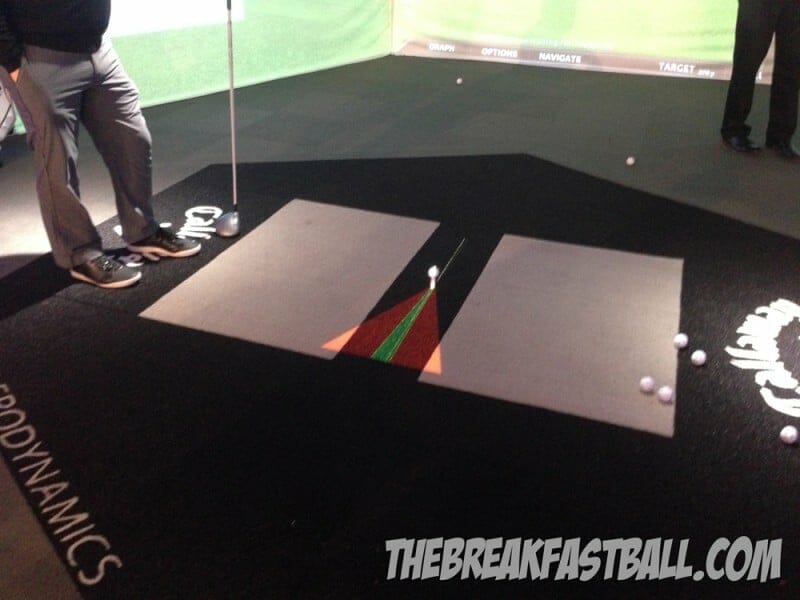 Like I said earlier the store is HUGE. Beyond the Callaway, TaylorMade, Ping and Titleist fitting stalls there is also an area they call “The Range” where you can take demo clubs and hit balls to your heart’s content. With video feedback it not only is great to see how well you’re hitting the ball but it’s a lot of fun too! 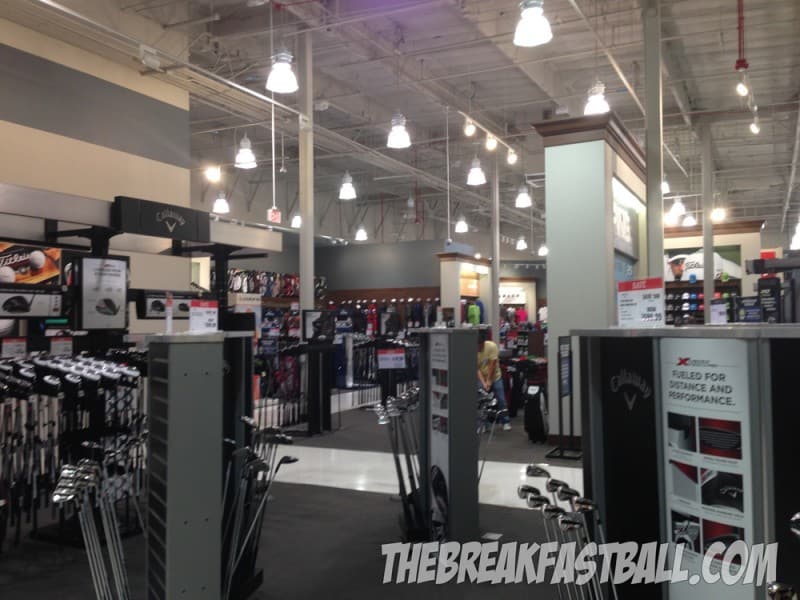 There is also a real legit Tour Trailer inside the store! Yuup, inside the store. I was told they had to bust an enormous size hole in the wall during construction to get the thing inside. Inside the trailer is where the cool stuff happens though. Re-shafting, re-grippng, club bending you name it the staff they have in place is there to make you feel like a tour pro!

On the other side of the trailer is where you’ll find the custom fitting stalls from TaylorMade, Ping, Callaway and Titleist. Like I mentioned earlier the star of the fitting booths was the Callaway setup. I did spend some time in the TaylorMade stall swing the new SLDR 5Wood (sick club I must say) and their stall was quit nice. 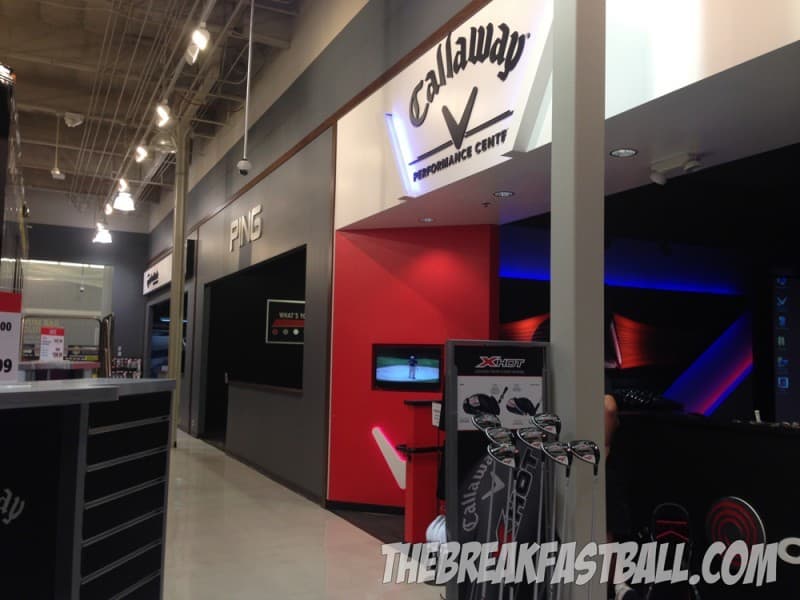 The big names are of course on display throughout the store. TaylorMade has a huge are dedicated to their clubs and does Ping, Callaway and Titleist. 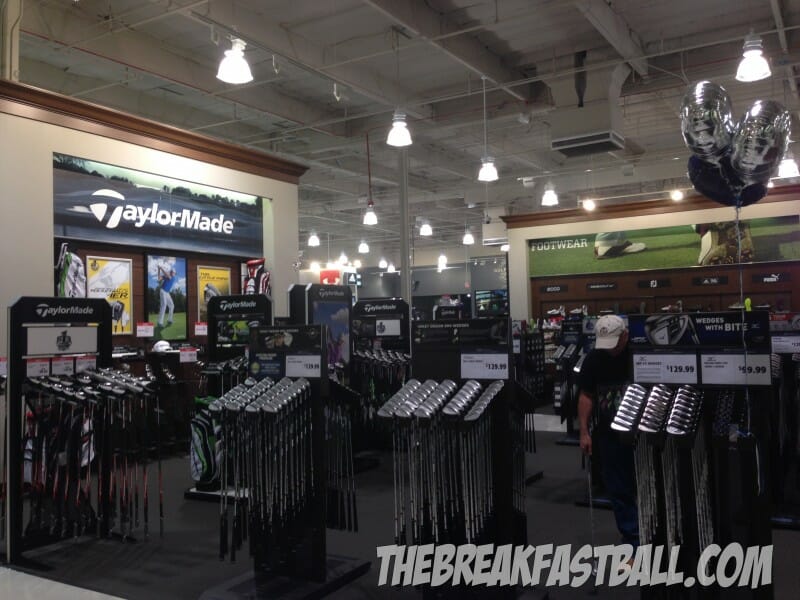 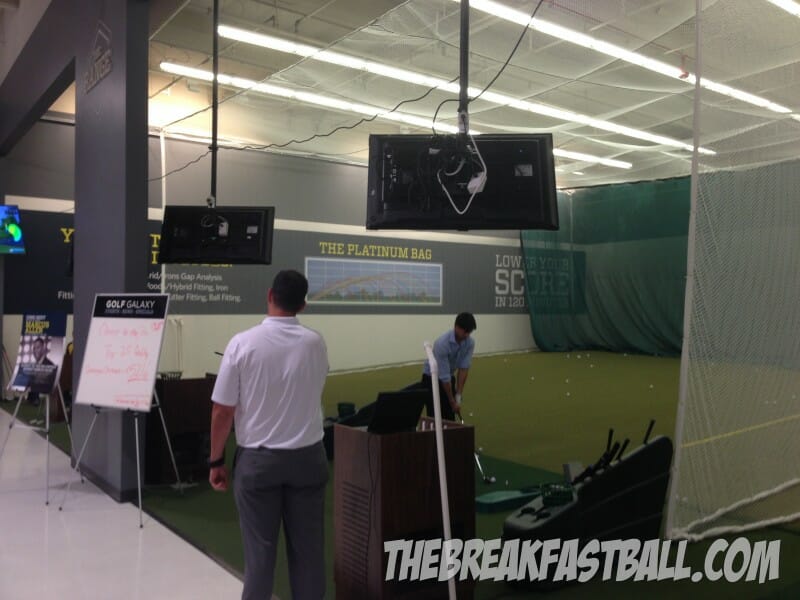 Just on the other side of The Range is putting area. Golf Galaxy did this right and I’m so glad they set it up the way they did. There are three different green speeds to put in ranging from slow 7-8 to fast 12-13. Out here in Vegas the green speeds vary so much. Some courses have the slow greens and other much quicker. At least now there is a place you can go and test out a new putter on green speeds you’re most familiar with. 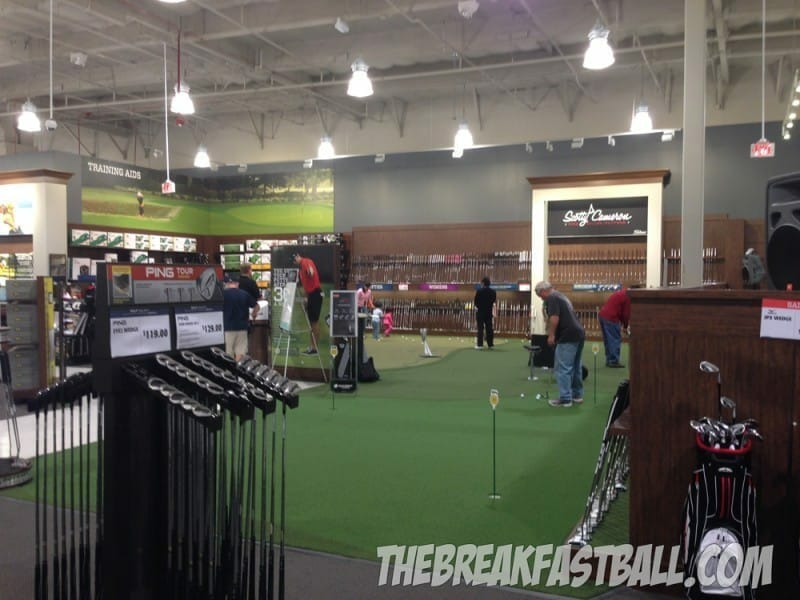 Nothing made me happier than when I came around the corner and saw a shoe display that would make any golfer smile with excitement. For me though seeing a row of TRUE Linkswear was delightful. Now there’s a place where I can tell people to go and try them on so they can see how damn comfortable the shoes TRUEly are!! 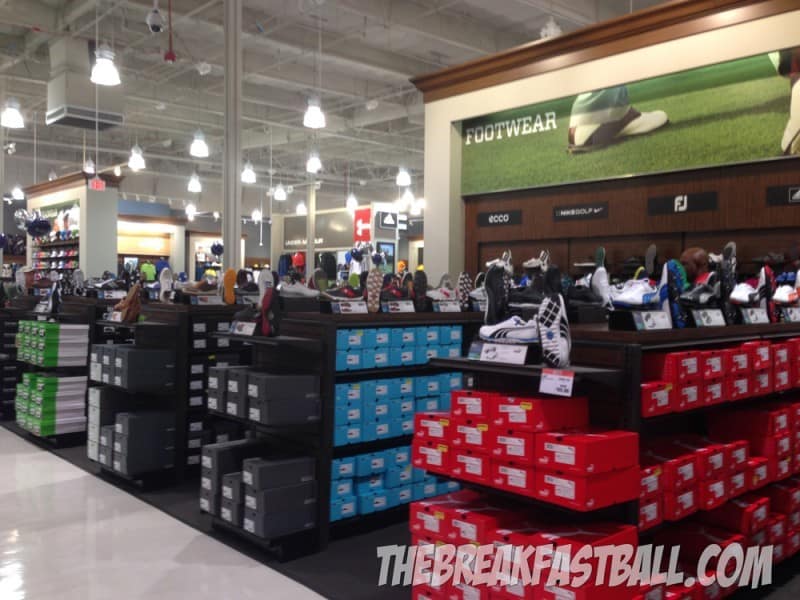 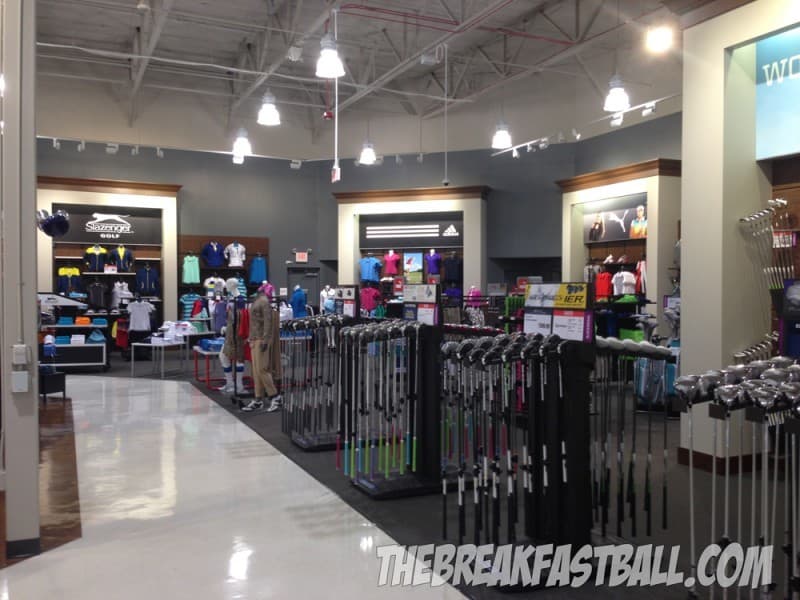 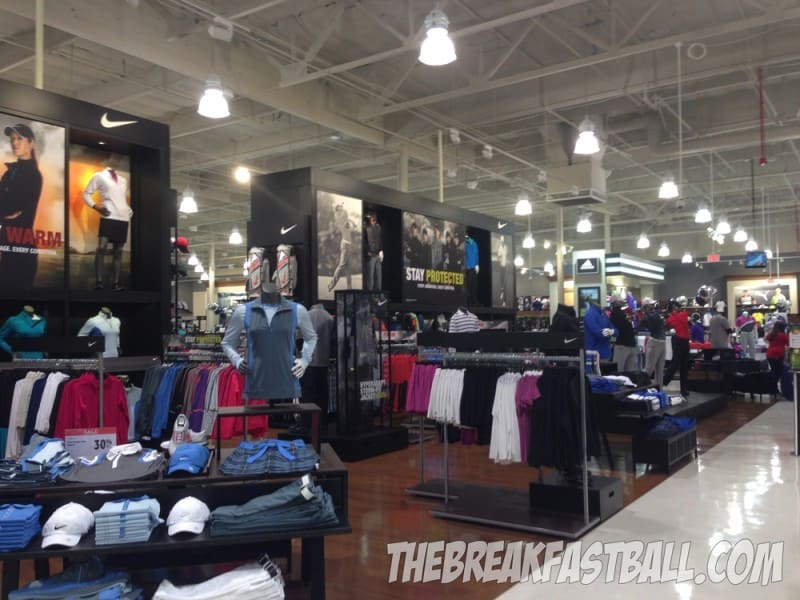 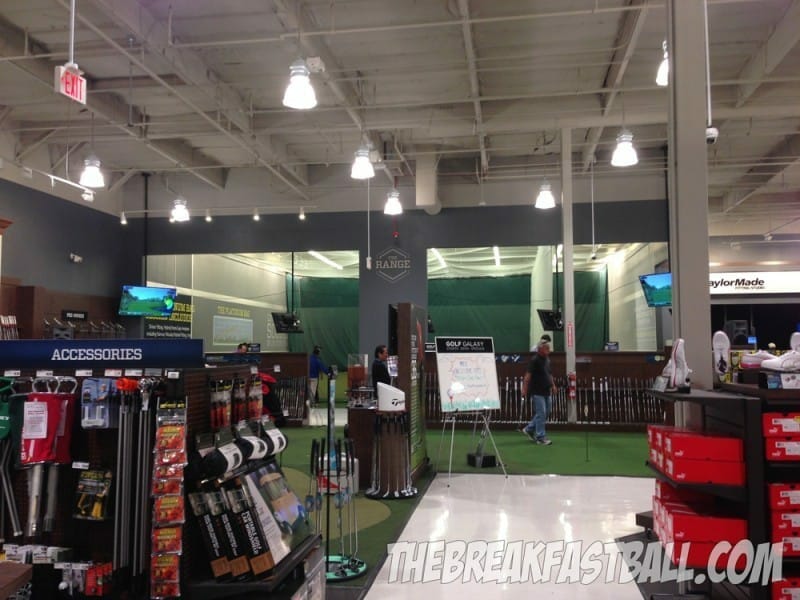 Without a doubt I’m one happy camper now that the Golf Galaxy has opened. Yes, I do wish they would open their eyes to some of the amazing products that are out there but I think that will happen in due time. This type of location has been much-needed for the Vegas valley. There is just too much golf played in this town for us not to be able to support an amazing golf retail store like this one.

So, that being said, if you live in Vegas or are visiting here from elsewhere, be sure to stop in and check out the Mega store that is Golf Galaxy. I’ve already logged over 4 hours in the store and I’ve only been in there twice. OK, three times.