The Golf Swing Shirt is a unique training aid that will help up you understand connection in the golf swing.

It’s hard to believe, but in just a few months it will be two years since I started working with Wade on my swing change. What’s the adage “Time flies when you’re having fun”? Yes, it has been fun but certainly not 100% of the time. My struggles with the swing change have been well documented here on this site and with the numbers on my scorecards as well. The good news is that those struggles I experienced in the early days of working on the new swing have dissipated and my game has shown some dramatic improvement.

Having your swing coach live 3,000 miles and two time zones away can make it difficult at times to sit down and chat about my progression. Wade has been unbelievable in making himself available for my schedule, staying up well past midnight on the east coast at times so that we can discuss the swing.

I say that because I spend a lot of time working on my swing alone in the garage with just my assessments determining how the session is going. Sometimes that has caused a few problems to arise. There’s nothing worse than working on a drill for 3-5 days only to find out you weren’t doing it correctly. Now you’re right back where you started and possibly in a worse position than before!

The Ballard swing has been challenging for me to learn.

Especially since I was anything but connected with my swing, but the more I’ve worked with it and the more I’ve practiced and played with Mr. Ballard’s ideology of the golf swing the more confident I’ve become. Furthermore, the time I’ve spent working with Wade has increased my game knowledge considerably when compared to how I used to think about the swing. But, it still weighs heavily on my mind that I may not be practicing all the time correctly since the Ballard swing is still something I’m learning.

So how does all of this relate to a training aid called The Golf Swing Shirt?

Relatively easy, it’s a product that is endorsed by Jimmy Ballard because of its unique ability to teach a player what connection feels like, which is a HUGE difference when compared to seeing what connection is like visually. 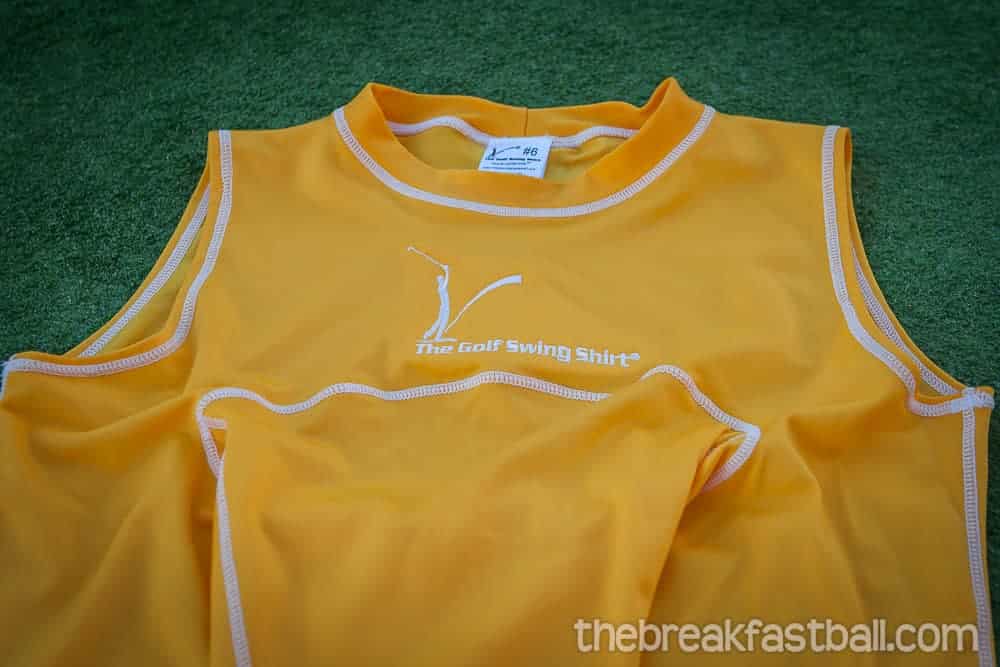 You can quickly bring up any video on YouTube of any Tour level Pro and see how well they stay connected throughout their swing. Replicating that action, on the other hand, can be just a tad bit more challenging. The Golf Swing Shirt can assist you in repeatably making a connected swing but not only at the begging or the end but throughout the entire swing.

Constructed from a high-grade compression fabric the Golf Swing Shirt is incredibly well made. There is no way this handy training aid is going to end up in the garage as a dust rag; you can easily tell it’s built to last from the first time you touch it.

The overall design of the Golf Swing Shirt is a sleeveless “tank top” style shirt that has a unique single sleeve that protrudes from the chest in a conical shape. When both arms are inserted into this “elephant trunk” as my daughters like to call it, the design of the sleeve keeps both of your arms together throughout the swing. From setup to the backswing, through the downswing, and also the follow through. 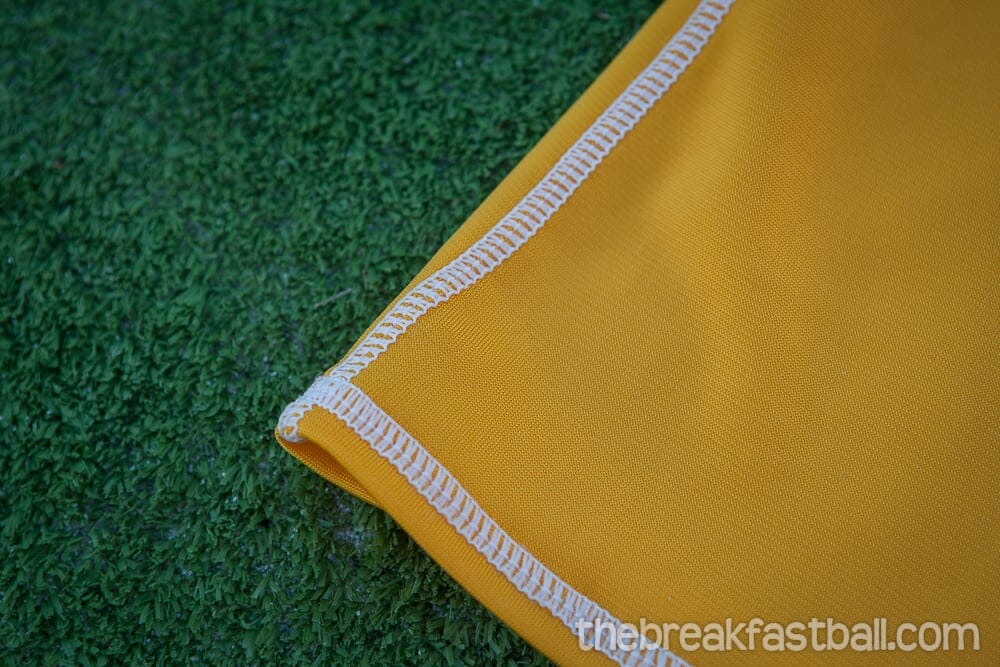 This isn’t a new ideology in the golf swing.

There are plenty of training aids out there to help players keep their upper arms together, but where those devices end and the Golf Swing Shirt begins is connection.
Connection is the foundation of the Ballard golf swing. I implore all of you reading this to take a few minutes and read up on a fantastic player who is often not talked about named Sammy Byrd. Mr. Byrd taking the connection theory Babe Ruth used in baseball and applying it to golf was genuinely revolutionary in my opinion, and his career backs up the notion.

Connection for me has always been a bit of a struggle.

No matter how much I’ve read on the topic and practiced at home, my release has been anything but connected. It’s been wild and unbalanced for so long that the transition to connected, balanced swing has taken some time. I’m getting there, though, and now that I’m training with the Golf Swing Shirt I feel like Wade is standing there with me during my practice sessions.
The literature that accompanies the shirt tells you right from the start that it takes a good bucket of balls to get used to the feeling the Golf Swing Shirt produces, and they were spot on to say so. The first couple of swings I took, after making quite a few practice swing without a ball, were hilarious. Not discouraging by any means, just very different.

Even though the beginning was nothing to brag about, after a good half hour of banging balls into my net I started to get into a groove – just like the manual stated.

The feeling of having your upper arms “handcuffed” by The Golf Swing Shirt can be a little unpleasant at first. It’s such a different feeling compared to standing over the ball with your arms free to move about. It reinforces the connection at the beginning of the swing, though, and that is critical. Without a proper setup it so easy to lose your connection and get off track. 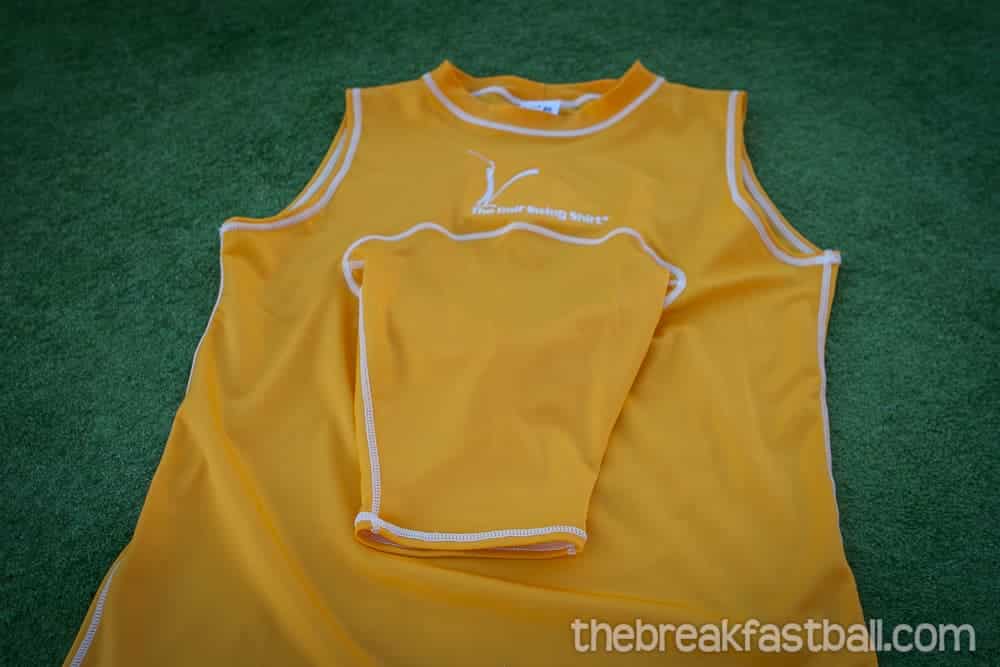 When I work with Wade via Skype, he has me get in a setup that is almost identical to where the Golf Swing Shirt places you. I like that affirmation it provides. Anytime I’m a little distressed about the early stages of my setup I can throw the shirt on quickly to set my mind at ease.

I’ve been nothing but impressed with The Golf Swing Shirt.

It’s very well made. The Golf Swing Shirt does a tremendous job at maintaining connectivity throughout the swing. And, it’s a perfect way to go through a checks-and-balance of my setup. That alone is enough to get a ringing endorsement from me that this is an excellent training aid, but the real magic for me happened when I took the shirt off.

Between practice swings and hitting a ball, in my first session with The Golf Swing Shirt, I wore it for about 45min to an hour. Taking water breaks here and there of course, but never taking the shirt off or removing my arms from the sleeve for a swing. Once I wrapped up my session, I was eager to pull my arms out from the shirt and take a swing to see how it felt. 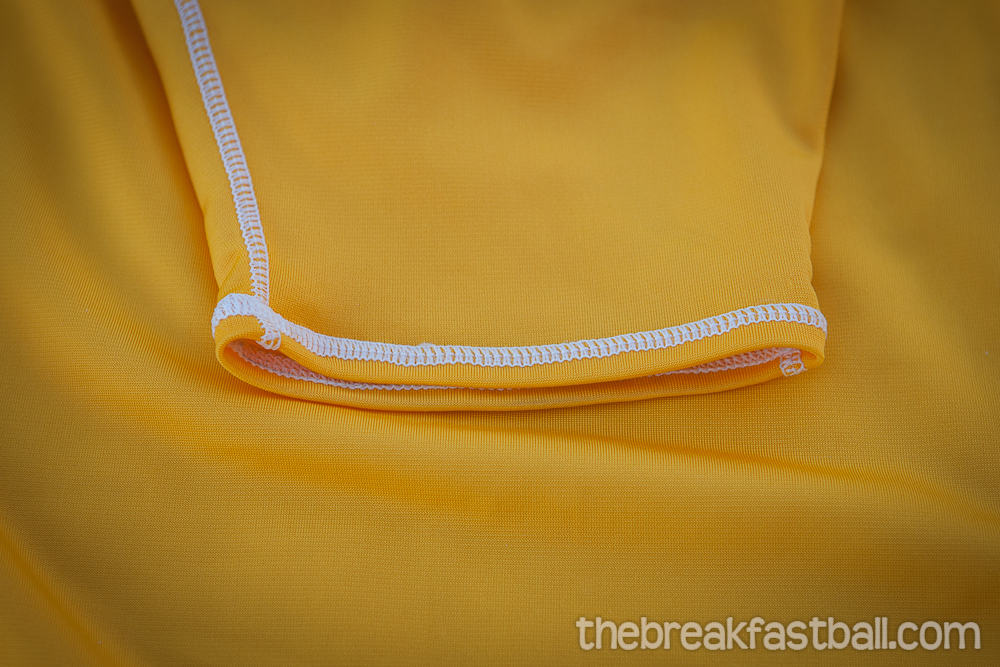 I don’t know how to explain this, but I’m going to try. I pulled off the shirt and set it aside, took my stance and swung. Once my arms got near the top of my backswing I had the strangest feeling; I can only describe it as feeling the disconnection.

Like I mentioned earlier The Golf Swing Shirt forces you to stay connected. Without the shirt on I felt free from the “handcuffs” and for that reason I was a little careless with my swing. As soon as I lost my connection this overwhelming feeling of “Uh Oh” hit me like a ton of bricks. The training aid was working even though I wasn’t wearing it. If you have ever had any “flexing” part of your body placed in a cast, you’ll completely understand what I’m saying. The first time the cast comes off, any rotation beyond what you were limited too, feels completely alien.

That’s how it felt when I lost my connection.

The only downfall to experiencing that feeling is it doesn’t last forever. Just like your wrist getting back to normal a few days after the cast is removed, my swing the following day felt much like it did prior to the sessions. 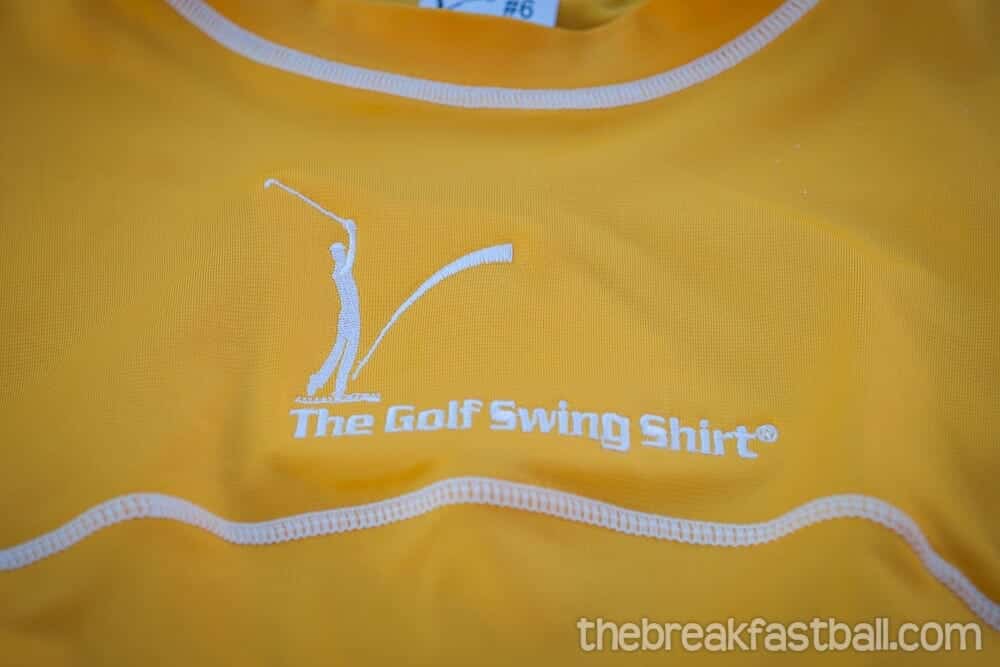 By no means does that mean The Golf Swing Shirt is ineffective.

For one, I’m much more aware of where I’m losing the connection in my swing. That has been a tremendous help. Also, my ball striking has improved since I’ve been utilizing the shirt and I’m now dedicating at least three nights a week to sessions where I wear The Golf Swing Shirt.

The Golf Swing Shirt is not a full swing for Irons, Drivers, and Fairway clubs only training aid. I’m using it for my chipping sessions and also putting. That’s right, putting! It indeed is a versatile training aid that comes with incredibly high marks from me.

The Golf Swing Shirt sells for $69.95, is available in eight sizes (depending on weight), comes in three different colors and can be purchased directly from their website.

If you’re having any issues with connection in your swing, seriously consider spending some time in the swing shirt. It’s helping me with my game more than I ever thought it could!