Great Sunday Morning Out at Chimera

The good pattern I’m on with my game continued over the weekend out at Chimera Golf Club.

I played another great round out at Chimera Golf Club this past Sunday morning and even though my driver has yet to return to its glory days from a few months ago, I had an excellent time getting in an early morning round. 6:40 am tee times are cool!

Here’s my scorecard for the round: 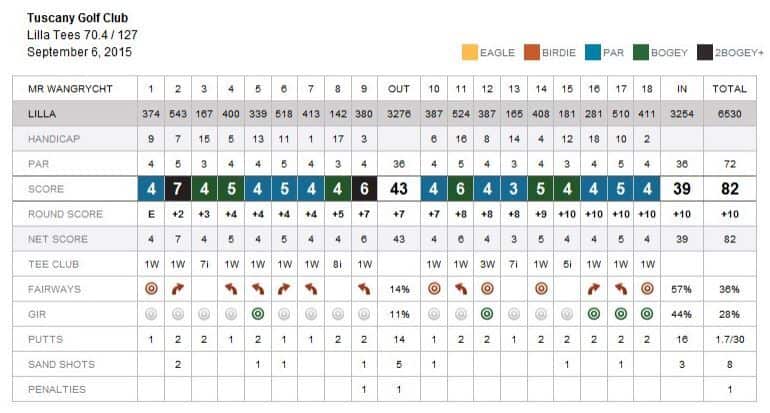 GolfShot apparently hasn’t updated their database, hence the Tuscany name in the title, but it’s the best looking digital scorecard I could find to show what took place.

My Ricky Johnson Putter has been a game changer.

Again my putting has been saving my ass over the past several months. Mainly in part to my Ricky Johnson Putter.

That damn thing rolls the ball better than any putter I’ve ever used, and it’s showing in my scorecards!

My driver was still a little erratic at times. The second hole it faded just a tad too much and caught a slope that rolled it into the fairway bunker, that same situation also happened on the 5th, 6th, 9th, and 17th. It was a bunker kind of day. The only positive I could think of was Chimera had made a huge change to the bunkers. The sand is playable, or it was teeing off at 6:40 am when there was still a little moisture in the air compared to the late evenings when everything is completely dried out. Regardless my sand play was rather solid and saved me a few times.

I didn’t hit a lot of fairways, but I wasn’t so far off them I had no shot.

Most of the times it was just a few inches or feet into the rough, so the majority of my missed fairways were playable, except those damn bunker shots. It shows with the four holes I pared even though I missed the fairway. My short game around the greens certainly helps contribute to those pars for sure. 38% scrambling made for a good day putting for sure. Nothing better than knocking it close and tapping in for par. Six 1-putts and zero 3-putts is an excellent way to roll the ball if you ask me.

I managed to tie my personal best nine-hole score with a 39 on the back. Had it not been for those stupid four extra shots on the front this post would have been about my first time breaking 80 but as it goes, I’ll have to hold off writing that post for now. I’m close, though, real close!

Soft Balls, Nah not for me.

For the last four rounds, I’ve been using the new Chrome Soft golf balls from Callaway. I don’t want to say I hate them; I’ll just say I haven’t been won over by any stretch of the imagination. Needless to say, I’m not a fan anymore. They are true to their name, soft, but I’ve been awful with them off the tee. My approach shots have been great, and it will check up on you for sure, but with my driver, wow, they’re all over the place.

I didn’t realize just how much until on the 11th hole I switched one out for a ProV1x I had in my bag. It was like an instant 25-30 yard pickup with my driver, and I nearly drove the green on the short par 4 16th. After blasting the next two tee shots after the 16th it was evident to me that the soft golf balls had to go.

So I’m back in the market for a new golf ball, at least until the Titleist lawsuit wraps up and I can get my hands back on some I Need The Balls! I sure miss playing them!

Chimera is proving to be a great locals golf course

Overall I was very pleased with how the day went. Even though Chimera is shutting everything down for a couple of weeks for overseeding the course still played great, and the greens were fantastic. It’s going to be an excellent course to play come early October.

See you in a couple of weeks @chimeragolfclub. Here’s to a great over seeding and a some outstanding golf headed our way in the fall!! #golf #vegasgolf #hendersongolf #chimera #instagolf #whyilovethisgame

With this round, my HDCP came down to a personal best 11.1

Which is down 3.5 from the begging of the year. It’s also the biggest drop in a single year since 2011. Things are progressing nicely. I’m not trying to rush anything and just take it one round at a time. I do need to spend some time getting my driver dialed back in; it was fun hitting the fairways a lot going back to the end of June and early July. I know it’s there I just gave to find it again.

With overseeding now taking place across the majority of the valley I’m going to spend some more time out back working on my chipping and putting and also spend some much needed time working with Wade to get the big stick under control.

I’m looking forward to the fall season. It’s by far the best time of the year in Vegas and the golf is outstanding!