And you have to have them to play this game.

I think I’m getting to the point in my golfing career where I need to settle down and pick a partner for the next couple of years or so, if not longer.

Since I started the game up again back in 2010, I’ve been playing with a plethora of golf balls. Titleist, TaylorMade, Callaway, Nike, Bridgestone, Srixon, MYBALL and even all the different variations that go along with each manufacturer.

I’ve made it a point to shy away from the high dollar golf balls for a good reason, I lose too many balls. Not nearly as many as I used to, but enough to realize it’s a waste of my money to fork over $45 to $50 for a dozen golf balls. I’m just now starting to see a difference in how a particular ball plays and that has what’s got me thinking about the future.

The Balls I’ve been playing.

Over that last several months, going back to July, I’ve been playing with the NXT Tour S Yellow balls by Titleist and that shown some mild success. 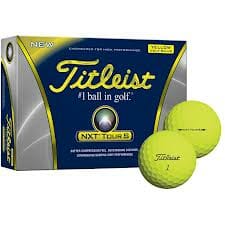 I went on a pretty good streak from July thru October averaging 93.7 per round, and only a couple of those were without the NXT S balls. I tested out MYBALL golf ball for one and then played another with the new Hex Black Tour ball from Callaway. Other than those two rounds the yellow Titleist has been my ball of choice.

Why? I couldn’t tell you.

It was more like I had success with a yellow ball once and was hoping the trend would continue. What started it all was last year when I played a round out at Primm and completed the eighteen holes with just one ball. That was a first for me, and I used a Yellow Srixon Z-Star. Since then I’ve been hooked on the little yellow guys, and I don’t have any plans on changing. 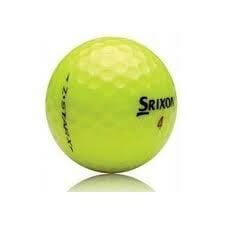 That’s put a little pickle on my golf ball selection. You have Srixon, Titleist, Bridgestone, Nike and now Callaway venturing towards the yellow variations. Not all of them are a tour quality balls except for Srixon Z-Star. That has put me up into that higher tier I spoke of earlier. The dilemma!

You might be wondering why I’m interested in switching things up? Especially when I haven’t been playing that bad, minus the Arroyo round last month. Well, there are a couple of reasons. The first being I’m not happy with how the NXT S handles itself on the green. The ball has no bite. I’ve had a few shots in my last couple of rounds that had I been using a softer, more grabbing ball the results, I believe, would have been much, much better. On the other hand, the NXT S is fantastic off the tee.

That’s where my other reason comes into play.

As I’ve improved as a player, my fairways hit percentage is on the rise. That means I’m hitting the ball better off the tee than in the past. I think the NXT S is helping me there, but it’s killing me when it comes to 150 yards and in. If I were still hitting few fairways, I wouldn’t even consider making a change to a softer ball.

Then I think about the round I played back in September at Paiute. I played that round with the Hex Black Tour from Callaway and had a fantastic day. I was successful on more approach shots that day than any round I’ve played, and my first putt distance average was 5 feet shorter than my average 15’to 20’. That helped with the putting as well. I recorded a record (for me) 28 putts that day.

That being the only round that I’ve played with a tour type golf ball in a long time has got the wheels turning, and I’m trying to justify switching to a higher tier golf ball.

But, a budget is a budget, and if I plan on continuing to play as much as I have been, I need to pull back the reins a little bit, or land a sweet sponsorship deal, and find a ball that’s not only affordable but plays as close to a tour ball as possible.

After sifting through the multiple choices, I’ve picked… 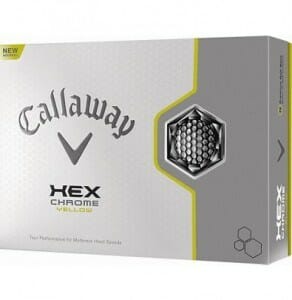 I’m hoping that what I’ve read about the HEX Chrome makes this search a short and simple one. Then I can go into 2013 with a wave of momentum and the tile of 2012 Winter Classic Champion!

No pressure Callaway, no pressure.

If anyone out there is playing a yellow ball you believe is excellent; please leave a comment below. I’m open to all suggestions!