I was clueless and had no idea how effective the KT Tape was until it eliminated my pain.

I used to run a lot and lately I have missed it, more about that in a bit. This story starts back in 2008 when I not only need to change some things about my life; I had to!  You see back in early 2008 I was a fat, overweight, lazy POS that got winded walking to the mailbox. Well, that all changed when I decided that if I was going to be around to watch my kids grow up, I needed to make a dramatic lifestyle change. That and my doctor telling me basically to make a change or die at an early age.

Diet and exercise. Hard work and eating properly were the keys. I went from a 220lbs blob of waste in May of 2008 to a trim and fit 155lbs in August of 2009. There was one thing that helped me put my weight loss over-the-top the most, and that was running.

I never ran before I started up in October of 2008. Maybe during a basketball game at the park or a softball game but never for a duration that was longer than 5 minutes. I started on a treadmill in the house and progressed to what I thought was rather good.

That was until I decided to go for a run outside one night. I didn’t make it halfway up the little hill my street is on before I felt like I was going to fall over and pass out. That made it a challenge for me.

I had already lost about 22lbs when I started my outdoor running, so the challenge aspect of it hit me hard. The next day I made it a little further, the next day a little further and so on. Before I knew it, I was running a mile then two miles and then three. Once I hit the three-mile mark, I signed up for a couple of 5k’s and started getting into a groove.

The running bug hit me hard and in the winter of 2009. My wife and I ran in the Las Vegas Half Marathon. That was an absolute blast! 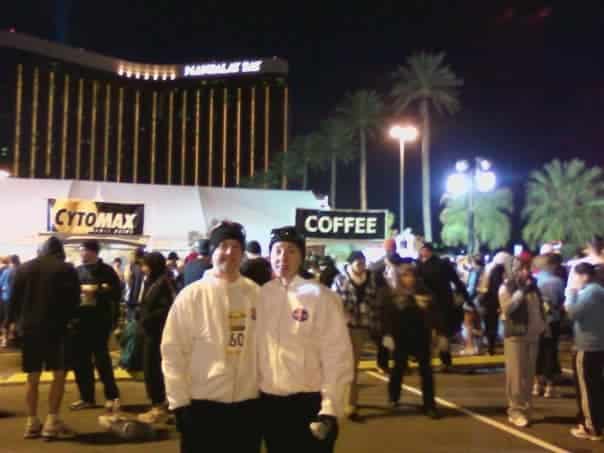 Running turned into a passion that I never knew could exist. It was a break from life so to speak. I would get out and go for a run and just decompress. That time while I was running was some of the best mental exercises I have ever experienced.

My diet changed when I started training for the Marathon. I went from a low carb diet with weight training to the complete opposite. Lot’s of carbs for energy and not as much weight training. When I was running for exercise, it was mainly a three-mile layout that I would run every other day and sometimes back to back days.

I was easily able to maintain my diet and the running, and because of that, the last 20lbs flew off me. Training for distance was something completely different. My body was craving energy from starches and carbs, and once I realized that I wasn’t going to be able to train for a long distance run without doing it the proper way I stopped my diet and went full force into the recommended training regiment.

Did it work? Oh hell yeah, as I increased my distances I started getting more and more confident with my running. I can remember the first time I hit the ten-mile mark. I was so surprised at how well I felt that I couldn’t believe I had just run ten miles. Surely there should have been more pain, cramping, vomiting something, but there wasn’t I only felt great!

After the marathon, I took a break and then tried to get back, somewhat into my old routine. That never happened, and as life caught up with me, I slowly began to fade back into my old ways of junk food, beer, and TV. Before I knew it two years had gone by, I had put 30lbs back on and was now very close to being back in the same situation I was in before.

So I decided 2012 was going to be the year where I get myself back on track. Nothing is more of a motivator than your 6-year-old saying ‘You’re starting to look like Fat Dad from the pictures on the wall.”  Don’t get me wrong; I haven’t completely let myself go to the crapper. Luckily for me swinging a lot in the garage and at the practice range has instituted some form of exercise in my life, but I miss running.

I knew that if I started running again, I would be able to get myself back on track, that was the plan at least. Then I hurt my Achilles.

I don’t even know how it happened. It was bugging me one a day, and I just ignored it, then it got a little worse and a little worse. My biggest fear set in when after playing 18 holes the pain was intense. It couldn’t be because of golf! Could it?

I had Dustin look at my swing, back when I was taking lessons, to see if he could tell if something was off with my posture or balance that might have been the cause of it but he couldn’t determine anything was wrong. It would hurt for a day then be ok a few days later, then incredible pain again and then slowly fade away. I couldn’t run anymore, and that was the biggest issue. I tried and made it about 10 feet. Also, I  tried the ICE method, Immobilize, Compress and Elevate but that didn’t help at all and I wore an Ace bandage to see if that helped, but it didn’t. So I gave up on running.

I told myself that I had to start eating better, no more beer and no more junk food. Since I couldn’t run the least I could do was eat right and make myself feel better. It’s amazing how cutting junk food, and crap from your food intake make you feel so much more alive!

Anyway, I started back on the diet that I was on when I lost all of my weight the first time, and that was nine weeks ago. I’m down 14 pounds so far, and I’m feeling good again. One of the last lesson I had with Dustin we went over flexibility, or my lack of, and he showed me some exercises that I could do at home that would help. I’ve been doing those stretches pretty religiously and let me tell you they work! This is by far the most flexible I’ve ever been, even more than when I was at my lowest weight.

I know this is dragging on a bit, so I’ll wrap it up here shortly, bear with me.

The other night I was cleaning out my closet, purging some old stuff and checking to see if any of my old clothes, the smaller ones, fit yet when I came across an old bag. This bag was from the expo that took place at Marathon.

We walked around and bought some t-shirts and things and grabbed as many of the freebies we could. One of those freebies was so fortunate to receive a sample pack of KT Tape. If you follow my Twitter account, BBGolfBlog, you know I’ve been raving how fantastic this product is the past couple of days.

Anyways, I grabbed the sample pack and saw that listed on the type of injuries it treats was Achilles Tendonitis. What the heck, right? So I gave it a try.

The website for KT Tape is great. There is step by step video that show you how to apply the tape for each particular injury. After watching the video for my injury, I went ahead and put on the KT Tape. The relief was almost instantaneous. The pain just vanished. 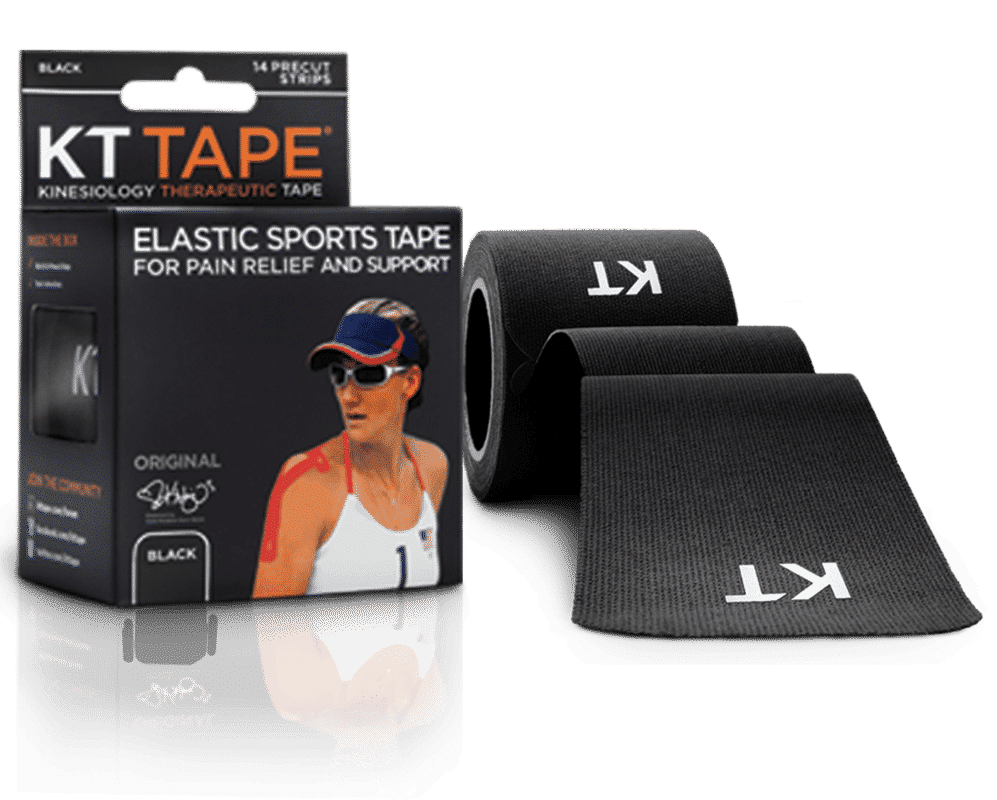 I didn’t do anything stressful that day, just your normal activities and at the end of the day, I was still in shock. Zero pain, none, zip, nada! I removed the tape before I went to bed, got a good nights sleep and woke up Monday morning ready to go to work.

That morning was the first time in months that I woke up and didn’t hobble to the bathroom. The rest of the day was more of the same, practically no pain and this was without the tape. I was convinced, so after work I swung by the local Big 5 store and bought two rolls of the KT Pro Tape.

My plan was to put on the tape after my girls had gone to bed and go for a little run to see how well the tape handled some stress on the injury. That was the plan at least. I taped up, went through all the stretches that I used to do before I ran, grabbed my phone (music of course, and the SportsTracker App) and headed out the door. I was nervous, to say the least. What if on my first push-off the pain is back and worse than ever? All this self-induced hype would have been for nothing, and even worse I wouldn’t be able to run. 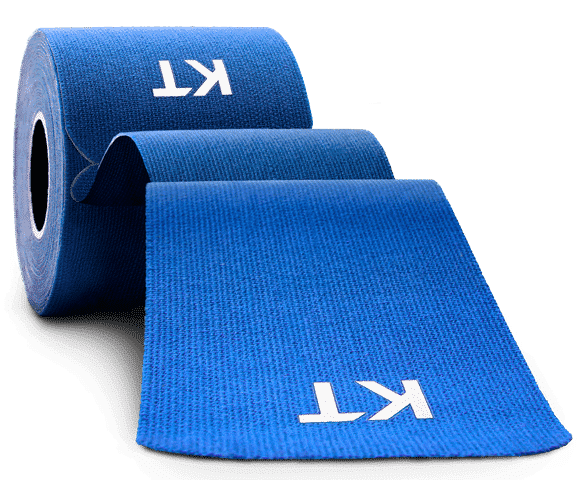 Step one, no pain, step two, no pain, step three NO PAIN! It was incredible like the injury never happened! Before I knew it, I was two miles into my run, and I had to stop. I could have kept going, but it had been since August that I had run past a mile and I didn’t want to hurt myself anymore than I already had!

That run was awesome. You don’t realize how much you miss something until it’s taken away from you. Thanks to KT Tape I have a little part of my life back that’s been missing.

I’m anxiously awaiting Sunday’s round at Rio Secco. My Brother-In-Law is in town, and he’ll be joining us (myself, Randy and Dan) for the round. I love me some Rio Secco and in it’s Fathers Day and the final round of the US Open and this weekend is looking pretty good!

I fully intend on wearing some of the KT Tape for the round on Sunday. Experiencing a pain-free round of golf is something I haven’t done in months. I can’t thank you enough KT Tape! Your product is amazing!