My Love for the Slow Motion drill

This past weekend I took the hour and twenty minute drive to Mesquite, NV to partake in what I was hoping would be a great day of golf. Along for the ride was my friend James Feutz from the UNLV golf team which made the potential for an awesome day even more likely.

What I hadn’t counted on was a complete collapse of my ability to hit a golf ball off of a tee. Over the past three to four weeks I’ve been putting together some very successful practice session and I was so looking forward to getting out on to a course that is not only tough but one I’m very familiar with.

Conestoga has been anything but friendly to me. There are several holes out there that just kick my ass plain and simple. Sunday though wasn’t going to allow myself to be intimidated with the course and instead just play my game.

That worked for about the first fifteen minutes I was out on the range warming up. I knew after the first several swings with my driver that I was in for a long day. There was no “pop” I’ve been getting accustomed to seeing and certainly there was no distance. With the winds gradually increasing every minute as our tee time approached I decided that it was the perfect opportunity to use this outing as a practice round to hone in some of my on course play.

Overall I left the Conestoga displeased of course, my driving was abysmal. But, my putting was really good considering the greens were rolling at an 8.0 and were very sandy. My chipping was very good. I pulled off the “Chipping with an 8I” about four times and executed it perfectly, well almost perfectly; one did stop about 20 feet short of my target once. My iron play was pretty solid as well, minus my tee shot on No. 5. I hit some very good shots, my best being on the 9th hole where I hit an 8i from 155 to within 2 feet. That was pretty cool.

My driver was the biggest disappointment though. I hit some nasty slices, I mean NA ASS TEE, and that was pretty demoralizing especially when James was just blistering the middle of the fairway all day long. The long drive back from Mesquite gave me a lot of time to think about what happened but even after stewing over it all the way back into town I was still perplexed.

Like you didn’t know that was going to happen.

One thing I absolutely love about talking with Wade is how he can find the positive in any situation even something like stepping on a pile of dog crap at the park, seriously. We didn’t talk too much about mechanics, the conversation was more about where my frame of mind was during the round. Wade refused to let me dwell on the negative by repeatedly talking about how well the other facets of my game were. There’s something to be said for positive reinforcement. It would have been really easy for me to forget about all the good that took place during the round because of my ills on the tee box had Wade not redirected my frustration. The more I thought about it the more I agreed with him, there was a lot of positives to take from the round. There was a reason for my lack of performance with my driver and once I figure it out my mind was set somewhat free. Dwelling on it could have seriously affected my session in the garage that night where after a very strenuous two hours I did finally manage to figure out where it was all going wrong.

What helped me asses my wrong doings was a drill that Wade has suggested a few times but I’ve never taken it seriously. It’s a simple slow motion drill, just swing at about 20% normal speed and feel your body getting into the correct positions.

So what happened with my driver? I determined that I was taking too far on the inside and allowing it to get behind me. Not having the club shaft on my toe line and not properly coiling forced my body to engage my hands to bring the club back around and I wasn’t turning my hips and coming through the ball. The “slide” move I was performing with my lower body towards the ball completely hindered my chance of squaring the clubface at impact and squashed any chance of having a power drive.

With the slow motion drill I felt so many bad things right away. No coil, hands out of position, the club laying down and feeling my hips not turning though in the down swing I knew right away why it’s called a “slide” move.

After working on the proper technique for a good half hour I started implementing some full swings into the session. Using my 3Bays swing analyzer when I saw the results of my previous swings to these new and proper swings it was night and day. 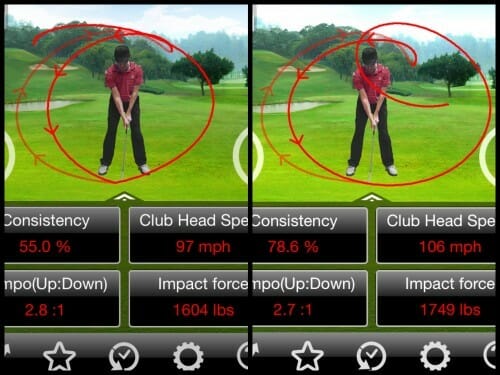 You can see from the picture that I wasn’t following through at all (panel on the left), a telling sign that my hips rotation was null and void. What jumped off the page to me though was my club head speed. It jumped almost 10mph. I’ve been living in the 95-97mph range for years and when I saw that 106mph I thought it was an error. What was most amazing to me was I was swinging easier!

Since that night I have put myself on full swing restriction until tomorrow night, I’m playing Saturday and want to make sure I get in a good session Friday. So far this week I feel like I’m swinging the right way again and hopefully my little lapse is behind me.

Guess I’ll find out for sure on Saturday. I’ll be making my way around Boulder Creek for the first time and I’m looking forward to it! Until then, back to the grind!