Lynx Golf; the return of a legendary brand to America.

At least to North America. Many of us, North Americans, though the brand had vanished from existence after Golfsmith bought the brand and let it fade into the nothingness.

In hindsight, Lynx Golf has been a trustworthy brand overseas, especially in the UK. Earlier this year, at the PGA Show in Orlando, Lynx Golf made their return to the States with a promising line of products. Most notably, to us was the switchable driver’s face, which has yet to make it to the stores.

We did, however, secure some of their new clubs for a quick insight into their tech. And a tease of what we hope is much more to come from this sleeping giant.

I was excited when I found out Lynx stayed true to their words and was going to send us some irons to check out. And when I opened up the box and pulled the clubs from the packaging, I was stunned at what I saw. For whatever reason, the time I spent in the Lynx booth, the Prowler Forged irons eluded me. Ryan had to show me photos he had taken, letting me know they were on display, and I didn’t have a massive secret. Haha. Yeah, I thought I was unique for a brief moment.

As you can see from the first photos I took of the irons, some similarities had my IG account buzzing,

A post shared by The Breakfast Ball (@thebreakfastballgolfblog) on Oct 2, 2019 at 1:50pm PDT

You can’t have a screw in a club now and not get a PXG reference.

The haters came out of the woodworks with this one. And who knows, maybe they were right to call out Lynx for taking a design PXG has been doing since its inception to the market.

However, it’s my job to take a look at the equipment, see what’s going on with it, test it out, and let you all know what I think. Yes, I’d be ill to say the Lynx Prowler Irons do not resemble a PXG club. But like I said in the heading, you can’t get away from people saying you look like you’re copying PXG when there are black holes or screws in the iron.

These five non-removable tungsten screws have different shapes and are not intended ever to be removed or replaced. Which has me asking the question, why make them look like they can?

I was hoping after playing them, my first opinion, which was the same as EVERYONE else, would change, and I’d find a damn good club under the shadows of internet shame.

The Skinny on the Prowler Forged Irons 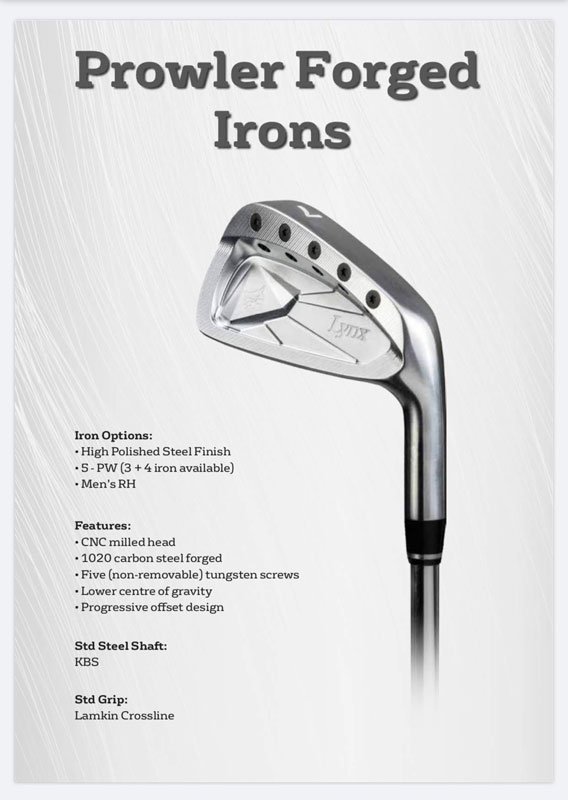 I’m going to put aside the similarity to the PXG clubs and focus on what Lynx has created with the Prowler Irons.

What I noticed right away was the leading edge of the club is very flat, and also there was a grind. After some conversations with a few people in the golf industry, their opinion was we’ll be seeing a lot more of this type of leading-edge grind. The golf courses being build and maintained nowaday, versus year, past are more susceptible to this grind. The sole of the club is also very flat. It reminded me of a Don White type sole. Ideally, I believe Lynx is working to have a set of irons that focus on turf interaction rather than distance and power. 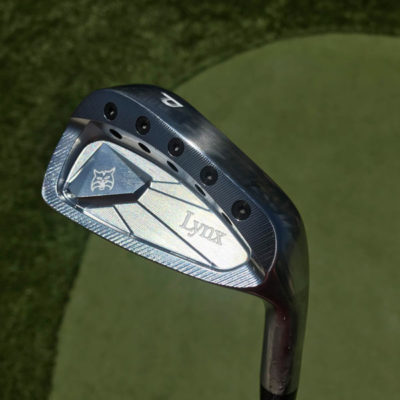 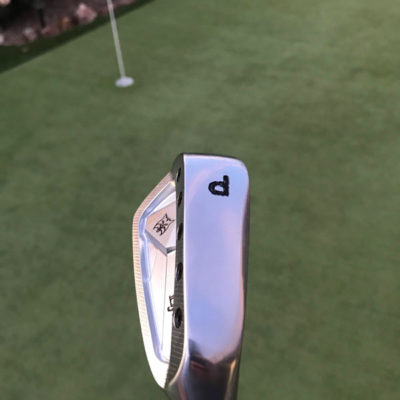 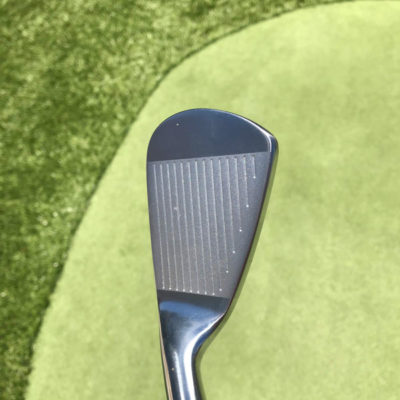 The weight was a surprise. I wasn’t expecting the heads to feel so light. 1020 Forged Carbon steel will generally have some weight to it, but for whatever reason, the Prowler Irons swing weight is very light. That threw me off when I first started swinging them. Even with the Tungsten weights in the bottom of the club, they are light. Thankfully they put those weights in there, or these would almost be unplayable for me.

While a lot of people are put off by the look of the prowler irons, I, for one, enjoy looking at them from address. Lynx did a great job in the design. The irons sit great on the ground, and what some may find “distracting” about the clubs is unseen while playing. The milling of the heads adds a nice touch of elegance and showcases the creativity of utilizing a CNC.

My only gripe is the white paint fill. It bothered me so much I decided to remove it and go with black instead. It instantly enhanced the overall look of the club. It’s a small issue that was east to fix. 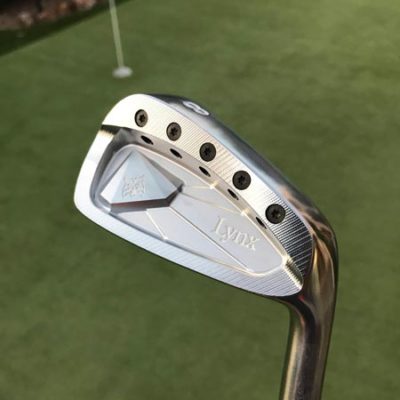 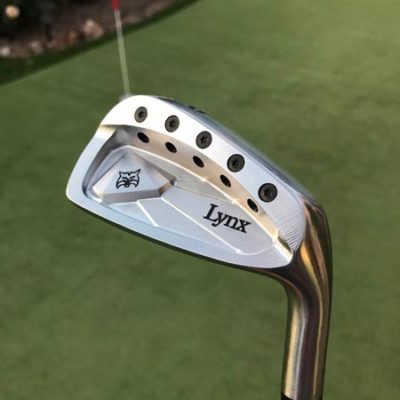 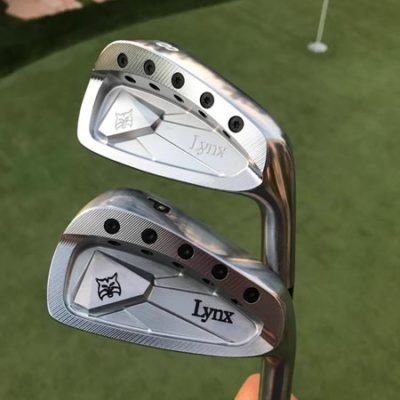 Anytime you put a new club in your hands and hit a ball; there is a level of excitement. Be it a hot new driver that just hit the market or something you snagged on eBay. That first swing can pave the way for utter excitement or utter disappointment. My first strike with the Prowler iron had me speechless.

At the time, I was gaming the Honma’s, and there was a very different feel compared to the Lynx Prowler irons. The TW737P Honma irons are a cast head. As much as I wish I would have gotten the forged version, I can’t change the past. Going from the cast head to a forged head certainly brought to the table some fantastic feel. But it was the consistent center impact that had me standing there with my jaw open.

It was pure, and it felt incredible.

Loft and length was an issue.

That’s not the fault of the irons. Had Lynx sent us a complete set, they would have immediately gone in the bag. And there is a good chance they’d still be there. But a small sampling was challenging to overcome.

As much as I love the Recoil line of shafts, they didn’t help with the weight of the club. At 95g, they made the overall weight very light in comparison to the Honma heads on the same weight Recoil shaft. I’m eager to take the heads off, weigh them, and then put in some heavier UST Shafts or a steel variant.

What I noticed right away, mainly in part to my skill set, was a miss-hit felt awful. With all the tech built into clubs nowadays to help with miss-hits, it was a surprise to me the feedback was so bad. The Prowler irons have a “blade” feedback in a not so much of a blade head.

Then I pured one, and it felt heavenly. Crisp and clean and a beautiful ball flight. The forged heads come to life with solid strikes. The feel is tremendous, and it makes you look forward to the next swing. And with those pure strikes, I was getting a trajectory I’ve wanted for a long time.

I’ve had more than one person swing my Honma irons and tell me, “Had you not told me these were cast, I would have never known.” they have a remarkable feel for a cast head. However, when you compare them to the Lynx Prowler Irons, there’s no comparison unless it’s a bad swing.

The Lynx Prowler irons would be in my bag

As I mentioned earlier, had this been a full set, they’d more than likely be in my bag. With a shaft modification, of course. The head shape looks great at address, and the results from the time spent at home and on the course were very satisfying.

I commend Lynx for bringing the Prowler Irons to the market. Regardless of the similarity to the PXG “screws” the irons are well built and perform much better than I had expected,

I look forward to seeing what else Lynx comes up with for the North American markets. The “switch-face” driver is something I’ve very intrigued to see hit the shelves. We sampled it last year at the PGA show and man, it was a performer.

To find out more information about the Lynx brand and the Prowler irons, head on over to their WEBSITE and see the full line of clubs they are offering.

The Lynx Prowler Forged irons retail for $999. They are available in Stiff or Regular flex.