I hate to admit it but my blogging has been relatively weak of late.

The swing change I’m going through has completely consumed me to the point of solitary confinement until I get my act together. There is only so much you can write about before people are saying “We get it; you’re going through a swing change!”

That was one of the reasons I went ahead and put out the Ranking Vegas post. The last three years have been an absolute blast to write about because it seemed like every few days I had some new thought or new discoveries that made a worthy story to tell, be it playing new courses or taking lessons, documenting my progress was a fairly simple process.

That simplicity really comes to fore front when all that you’ve been doing, when it relates to golf, is practicing. Believe me I could have pounded out post after post of my struggles to get though this swing change but that’s not really the content I want to put out there. Besides, repetitive profanity laden posts can be a bit of a character destroyer and I don’t want that!

There is however some good news that I can finally speak of. Several weeks ago Wade and I had what I can only describe as a monumental breakthrough. I wasn’t aware just how big it was when I spoke about it in my most recent post about the swing change, but I found out over this past weekend that what Wade and I have worked on over these past three weeks is now showing some pretty good results.

My practice sessions have been outstanding and better than that my ball striking is almost where I’m happy with what I’m seeing. After a really good session at Callaway Sunday morning I found some free time that afternoon and went out and played nine holes on the Concord course at Revere Golf Club. 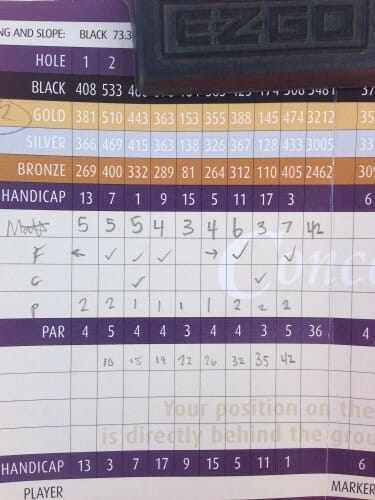 No question that was the best nine holes I’ve ever played. Two simple mistakes cost me a couple of strokes but all in all I was happy as could be when I was done. No penalties, 5 out of 7 fairways (one rolled through to the first cut) 14 putts and ZERO three putts!! My chipping was off the charts good. The chipping drills and advice from Wade have been a real game changer for me.

I’m hoping that was a turning point for me. I feel like I’ve gotten a better understanding of this new swing and the more I play, the better it’s going to get.

This weekend that theory will be put to the test when Randy and I play out at Siena Golf Club. Siena is one of the few on my must play list for 2013 so it was an easy choice. The weather is supposed to be amazing and I’m ready to move forward. I’m also ready to stop calling this a swing change and start calling it my swing!