My attempt at slaying the DragonRidge Country Club

This past weekend I had the absolute pleasure of playing a round at the magnificent DragonRidge Country Club. It’s not everyday you get to hop on a private course and enjoy all the benefits that come along with a membership at a pristine golf course, well at least not for me it is, that’s why I was truly excited to get the chance to play this beauty of a course in the hills of Henderson.

Just playing DragonRidge would have been an experience one doesn’t soon forget but what made this round even more special was I got to play it with my swing coach Dustin. The Nicklaus Academy, where I’m taking my lesson, is based at DragonRidge and Dustin let me know a few lesson ago that he wanted to get me out on the course and see how I handled myself during actual play. So last week after my lesson he asked if next Saturday would be good for me and without literally jumping up and down I calmly said, yeah that will work.

I’m quickly learning that March is not an ideal month to plan a golf outing. I attended Golf Fest the first weekend of the month and the weather was amazing and after Golf Fest I played Rio Secco that afternoon and the weather luckily stayed the same and I shot my best round to date. The next weekend brought in some ridiculous winds and the only good thing about that was I was able to practice low shots into the wind at my lesson. Then this past weekend mother nature let everyone know that she is still in charge. As erratic as the weather has been 78° one day and snow two days later, seriously that happened, I started to focus on the weather forecast right away. I didn’t want to miss the opportunity to play DragonRidge because of some crazy weather pattern decided to take homage in the valley and from the start it didn’t look good at all. Rain and wind were in the forecast, but it was seven days out and if I have learned anything from living in the Vegas valley its this; NEVER TRUST A SEVEN DAY FORECAST. Ninety percent of the time they’re wrong and I’m being nice with the ninety percent claim.

The days went by and the forecast stayed the same, which sent up a red flag. Consistency is never a good thing when you concerned about the weather forecast in Vegas, in May thru September the work for a local meteorologist is simple, Hot, that’s it. That is all they have to report but in late winter and early spring they have to work for it! As the days of the week came and went the forecast stayed the same and as the weekend got closer the details about Saturdays weather looked more grim by the hour. Friday night I was pretty sure I was going to be playing in something similar to the Bishops near course record round in Caddyshack!

We were scheduled to go off at 12:50pm and the rain was scheduled to meet up with us at 1:10pm. Twenty minutes of golf at a Private course was all that it looked like I was going to get. Regardless of the horrible forecast I packed my rain gear and umbrella anyways and headed off to the course. A little rain and wind was not going to keep me off the course this weekend!

Taking lesson a the Nicklaus Academy took a little bit of the shock and awe away from the homes you pass by on the way to the clubhouse. I’ve driven by them a dozen times now and although they are very impressive it wasn’t a distraction. The first time I made my way up the hill though was completely different. There are some absolutley stunning homes perched on the hillside and I confused one of them for the clubhouse as I drove by it the first time! I met up with Dustin at the studio and he said to go ahead and warm up while he finished up with another student. The wind was blowing in from left to right and hard. The first couple of shot I hit with my 7I were blown so far off the target line I thought “Holy shit, this is going to be nuts!” I changed my target and started practicing what we worked on in the last lesson, low shots into the wind. The rest of the warm up went great. I was hitting my irons decent, even the 5I, and the wedges were dead on! Dustin finished up with his student and we headed out.

We started on the fourth hole, a foursome beat us to the first tee so instead of playing through them we just jumped ahead a few holes and started there, and the weather when we tee’d off wasn’t that bad. A bit breezy but nothing like it was supposed to be. This was about 45min sooner than we were supposed to tee off so I wasn’t too surprised with the decent conditions. My first tee shot I struck really well and it came to rest in the first cut of rough on the left side of the fairway. Missed my first fairway by a foot! 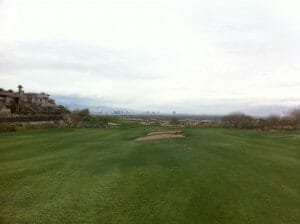 I duffed my next shot and then hit my approach a bit too far, that was my first run in with the wind. The chip shot back to the pin, which I felt like I killed, didn’t go anywhere near where I planned it to go, that was my second run in with the wind. I managed to two putt from that spot and walked away with a bogey. Not my ideal start to a round but I looked at it as a good drive, a decent approach, a good chip and a great two putt. The next three holes we were blocked from the wind, somewhat. It was still present but where we were on the course the mountain really blocks the wind and it was a nice little stretch where I went Bogey, Par, Double. The double bogey on seven really irked me. I caught my SW a little high on the club and it carried over the green into a little creek. The wind played  a big factor, it was only about a 70 yard shot and I took more club and then miss hit it! DOH! Minus that little snafu and a couple of duffers I was actually pleased with the way I was playing so far.

That was it as far as “nice” weather went. As we got out of the little area that was protected the wind picked up something fierce and made a potentially decent round very, VERY challenging. At one point when I was inputting my info into my ClubSG account from my phone Dustin said “I wouldn’t even keep track of your stats today, these conditions are just too rough.” it got that bad. When we got onto the 13th tee I opened up the Optimal Club app to see what the wind speeds were and it was a constant 29mph. That was bad enough but the gust were insane! I started working on hitting a lower tee ball with my driver and moving it back in my stance some to get the lower ball flight for conditions like we had, but it was obvious I needed more work at it. My straight drives I was hitting early on in the round on the front nine went away when faced with a 30-40mph head wind on the back nine. I have one more wind story and then I’ll put it to rest because I’m confident you get the idea, but anyway here it goes. On the Par 5 18th Dustin hit his drive 365 yards! Impressive I know,  that was with the wind blowing down the hole towards the flag. The next hole, number one, going the exact opposite direction he hit driver again and I think it was 240 yards. Needless to say the wind was unbelievable.

I can’t say enough about the course. It was in amazing shape for mid March. The greens were in great shape and the fairways were awesome! I’d tell you how the bunkers  were, but I was never in them! I don’t know if that was luck or skill, who am I kidding it was luck. 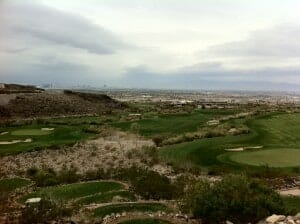 After the round I asked Dustin his opinion of how I played looking to get some feedback. He told me I hit the ball really well, when I hit it but under those conditions it was just to difficult to judge what was taking place. Putting was crazy because of the wind, chip shots were way off because of it and overall it just wasn’t an easy round to asses. He did smile and grin as he said “I know what were working next.” after consecutive duffs by me on number nine. I solidified that comment by nearly decapitating him with my 5I on number twelve, a shot I will never forget, not that I don’t want to forget it I just think he’s going to remind me about it every chance he gets!

Overall the experience was a great one. Playing a round of golf with someone of Dustin skill level was definitely a learing experience. What amazed me the most was the distance control he showed even in the crazy wind. A couple if times he hit a shot that in my head I said, “Holy crap he killed that ” thinking the ball was going to fly the green by some 50 yards only to find out it was nicely placed on the green. That, and having the ability to hit the lower “stinger” shot off the tee into the wind was a joy to watch. I found my self saying “WOW” a lot!

Where I sit right now I’m happy with how my game and lessons are progressing. Uneven lies are what’s on tap for me next, that’s what Dustin was referring to earlier. I asked him if that was the cause of most of my miss hits and he said some, but not all. I’m just glad he was able to see something and have a game plan. I did manage to overwhelm him with a lot of bad!

I plan on working on my tempo this week at home. The Achilles didn’t flare up like it has the last couple of times I played so I’m going to try to spend a little time each night over the next couple of weeks getting my tempo to be more consistent.

The good weather is coming! Hopefully I’ll be ready for it!

No. 96 The Weekly Walk Season 3 Episode 19 The Masters Recap What a win... Read More

E93: Special Episode Ranking Vegas You wait all year for this! Our 2021 Vegas Rankings... Read More

No. 92 The Weekly Walk Season 3 Episode 15 Thanks for checking out our most... Read More

No. 91 Season 3 Episode 14 Thanks for checking out our most recent episode of... Read More

No. 89: The Weekly Walk: Season 3 Episode 13 Thanks for checking out our most... Read More