The last round I played, which seems like forever ago, I went through some growing pains with a new putter I put in play. It was a questionable decision on my part to go away from a flat stick that I’ve been getting better with over time in my Odyssey Versa but I’m so intrigued by the milled putter philosophy I took a gamble. I’m hoping in the long run the wager I placed on myself pays off and if what I’ve seen over the past couple of weeks is any inclination of things to come the risk certainly has a reward side!

You’ll remember back in November I was posting tons of pictures of the putting green I’m getting installed in my backyard. There’s a long story behind the entire project but in short it’s about 90% done. I’ll be talking more about the whole construction process once I’m satisfied with the outcome but for now just know I have a decent area where I can work on my putting stroke from about 10-12 feet.

This is important because after my dismal putting display the first time I took the Rife putter I’m currently using out for a spin I was in a complete state of confusion. What was so perplexing was how well and how awful I putted with it. I had a total of five 3-Putts in addition to my five 1-Putts. Throw in eight more 2-Putts and you can see that I was all over the place when it came rolling the ball on the short stuff.

So for the last couple of weeks, baring a soccer practice, game or tournament I’ve been spending some quality time in the backyard working on re-learning my putting stroke.

This all stemmed from a conversation I had with Kenny Giannini about the difference between a milled faced putter and one with an insert. His words resonated with me and ever since that discussion back at the PGA show in Vegas last year and I’ve been dying to put a milled putter back in my hands.

You may recall my first attempt at a milled putter when I complete destroyed my putting stroke trying to make a SeeMore putter work for me. Nothing against SeeMore, they’re a fantastic company with an amazing product, but at the time I wasn’t ready to make the move to a milled face. Luckily the SeeMore failure convinced me that my putting needed some drastic assistance. Wade stepped up like always and with a complete revamping of my stroke and approach we have been able to get a much better and more consistent motion out of my putting.

Since my overhaul I’ve actually been putting pretty good, not great like I want but I’d say above decent. Tempted to make the move back to a milled putter and see if I could take my putting stroke up a level I’ve been contemplating opening up the pocket-book and getting new putter. That’s when the awesomeness that is Instagram showed up like the brave Knight to save the kingdom.

OK, so that’s a bit of a stretch. In short, I won a real quick contest that Rife held on Instagram and for rapidly naming the putter they posted I won this brand new Bimini putter. 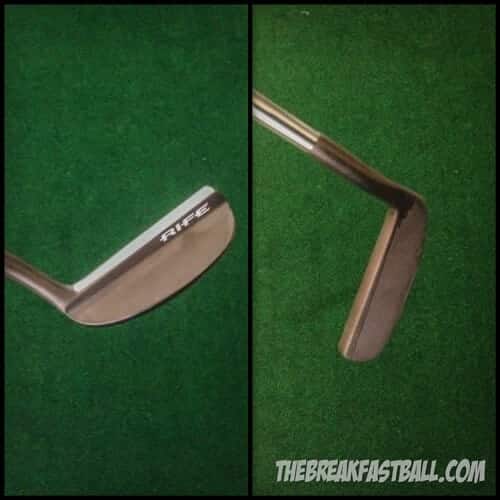 I practiced with the Rife at home for a little while before I used it in the round I talked about earlier. As much as I would have like to get out and practice with it on a real green that  just wasn’t possible. My freaking day schedule is insane with work and both my girls being heavily involved in soccer. The free time I did have I used to get a feel for how the ball comes off the face and really just to get a grasp of putting with a new style putter.

I don’t remember off the top of my head if I ever talked about it, but when I first got my TaylorMade Daytona Ghost I was walking to the register with a Ping Redwood in my hand when I saw the putting studio at the shop I was at. Always searching for new info and knowledge I jumped at the chance to see what my numbers were like.

What I found out that day was my stroke put a ton of backspin on the ball and that’s a no no. The last thing you want is your ball back spinning off the face, you’re looking for a ball that starts on its target line and rolls forward immediately. When I made the same set of three strokes with the Ghost putter the numbers were almost the opposite of the milled Ping and once I was educated on the matter by the staff member it was a no brainer. The Ghost went in my bag.

Who knows what would have happened had I chosen not to stop and ask if we could use the putter studio and see my stats. Sadly enough though I found out just what would happen quite a few months later when I met and chatted with a few of the guys from SeeMore. I was blown away with the craftsmanship and style that SeeMore was putting out and after putting a few times with their clubs I convinced myself “I needed” to be in possession of one of these game changers.

Regrettably so my love affair with the SeeMore putter lasted about as long as a Fox comedy show in the early 2000’s. I went back to the TaylorMade Ghost after a fit of frustration and poor putting performances. I decided to keep it in play until I found the magical putter that would save me from this situation that was bound to repeat itself.

The Ghost stayed in my bag for a while and while I wasn’t setting career highs in putting stats it was a stable part of my game that I wasn’t interested in messing with. That was until I picked up one of Odyssey’s new Versa putter to review for Three Guys Golf.

The Versa was a game changer for me. The ball comes off the face like butter on bread a godsend and when I started really getting a feel for the stick my stats improved dramatically. Most notably was my three putts. Now it wasn’t entirely the putter that was the cause of my turnaround. Wade had a lot to do with it. With my overhaul and the combination of the Versa I’ve been flying high when it comes to my putting game.

That conversation with Mr. Giannini still to this day lingers in my head and now that I’m bringing a much more stable and consistent swing with my putter to the table I think I’m ready to bring a milled putter back into the bag. That ideology is what made it easy for me to swap out the Versa for the Rife.

After one outing and a ton of putting in the backyard I’m starting to get a real feel for the Rife putter. I no longer see the backspin that I used to see with the SeeMore and that’s a huge change. With the Rife being a blade putter that is heel shafted vs. the center shafted SeeMore I actually love standing over the ball and looking down at it. That was missing with the SeeMore and I think it affected me way more than I thought it would.

This weekend I’m going to get out and play a few rounds and I’m seriously looking forward to hitting some putts on a real green. I gave up an easy 5 stokes the last time I played by just not being prepared. I’m hoping that with this weekend’s rounds I can bring to the course most of the success I’ve had at home and throw up a few good scores.

If not I’m sure you’ll shortly be reading about how I’ve once again gone back to an insert and how the haunting of my golfing soul by Kenny Giannini is still taking place!