In my last post, I talked about how I been relentlessly working on my putting.

I’m trying to find some glimmer of hope for improving my numbers in 2015.

I worked with Wade on this issue for a while back in 2013. For the most part, I had committed to his style of putting for a couple of reasons. The first was it felt right. I used to have a terrible issue with my alignment, posture, and release of the club. Wade helped me so much in this area by deconstructing my entire setup and starting over from scratch.

I was a mental power struggle though because I’ve always thought of myself as a decent putter. I don’t think I’m in the Ben Crenshaw category of good. But, I’ve always been confident when it comes to rolling the ball with a flat stick.

Before I decided it was time to make a change I looked over my stats. When I noticed all the areas of my game were improving but putting I decided to approach Wade. It was after the first conversation with Wade when I made the move to start over from scratch. So, it was time to re-evaluate the situation.

In the early stages of the change, it was incredibly positive.

Over the first 10 rounds, I went from a 34.1 average per round to 31.7 putts per round. Then over the next 10 rounds or so I found that number gradually starting to creep back up. Right back to the number I was seeing so once again I started questioning my skills.

A big change to my approach to putting came in May of last year I reviewed the Giannini G6 for Three Guys Golf. This putter was my first ever high-end, milled putter and I quickly became fascinated with not only boutique putters but also the consistency and feel of milled vs. an insert. I was in love. 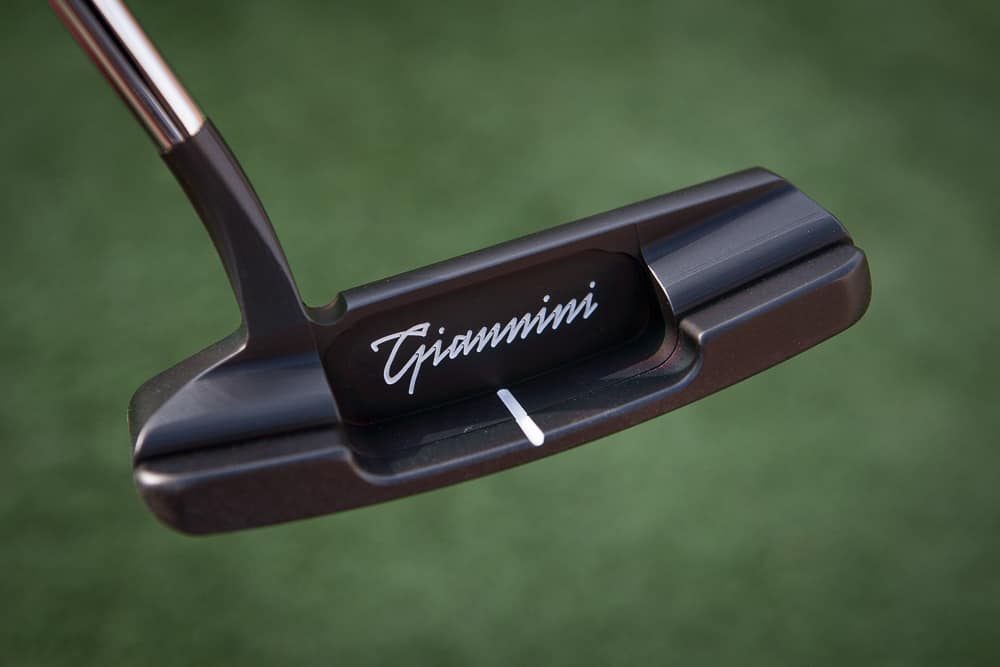 Using the G6 I found myself rolling the ball better than I ever had.

Putting the G6 in my bag helped me get a better understanding of where the flaw in my swing was because it is incredibly consistent. No matter how well you roll the ball if you’re not aligned right and missing your spots the putts are not going to drop. Now that I was using a putter that was milled any inconsistencies that are brought on from an insert are much less and I’ve been able to get a true sense of how I roll the ball.

The good numbers I was putting up with the G6 in my first six outing again started to turn south after those several outings and I ended finishing the last seven rounds of the year averaging 34.1 putts which really pissed me off.

Even with the new Giannini in play, I was still putting really bad when it came down to it, so I decided to dig deep into the numbers and start aggressively analyzing my stroke. Now that my green is completed and ready for everyday use I went to my bag of putters, pulled them all out, headed to the backyard and spent several days going through some rigorous testing.

It was a simple response from my friend Andrew that got the ball rolling on this. I explained to him how my misses were all over the place. My speed was fine but I was missing left and right all the time.

“Get your eyes over the ball more.”

That resonated with me and I started to realize just how far off the ball my eyes had become.

In trying to obtain a more comfortable posture I had completely taken my eyes away from the ball, like really far.

The posture I changed to was similar to my posture at the address for a full swing, tall and with my butt more underneath me. What I immediately liked about this position was it eliminated any pain in my lower back. Prior to making that change any session I had ended with me walking to my care like a 100-year-old man with scoliosis. Changing to a more upright and taller posture took that element away from my putting and even though I wasn’t over the ball with my eyes I was comfortable and in the beginning, it worked.

The taller stance had me switching to a longer putter shaft. I’ve always been fitted to a 33” to a 33.5” length putter but after trying out some 35” putters at the store I made a decision to go with the longer shaft so I would be able to maintain the taller address position.

The taller setup felt better but did not equate to better numbers.

The shaft is 2” longer and it did keep my eyes away from the ball even more than I realized but as I said, I felt amazing at address, my sessions were pain-free and most important I was putting better.

With my physical make-up (fancy for beer gut)  it’s a little difficult to get a 35” putter in a stance where I can get over the ball with my eyes and the putter not be anchored to my body. Because of this uncomfortable position the first putters, I pulled from my bag was my 33″ TaylorMade Ghost Daytona.

There was another reason I started with a 33″ putter. Mainly because of my insane ability to keep stats like a crazed lunatic. The night Before I began using the 33″ putter I went to my stat spreadsheet to see if I could find any numbers that showed a difference in my putting when I compared the figures of me using a 35″ vs. a 33″ club. I was trying to see if having my eyes over the ball more with a shorter shafted putter was noticeable.

Here’s what I found:

It’s not overwhelming by any means. If anything it was underwhelming. Putts per was less with the 33”, but I had more 1 putts with the 35”. In all seriousness, though my chipping improvement has much more to do with that than the putter length. The 3-putt numbers, on the other hand, were surprising.

It’s no secret that the easiest way to reduce your putts per round is to eliminate 3-putts and as a mid-handicap, it’s a major factor if I plan on showing any improvements in my scores. Breaking 80 averaging 34 putts per round just isn’t an easy thing to do. In 2014 my best score, which is also my career low, was an 83. I had 37 putts that day with 4 3-putts. No 3-putts and I shoot 79, so I get the importance of eliminating the 3-jacks!

Even at 35”, the Giannini has been my putter of choice over the last 10 months and I can only expect to continue my new love affair with it the more I putt in play. Getting the feel for the milled face hasn’t taken long to get used to at all and I love the feedback I’m getting from a face without an insert. Something is still off though because I’m just not improving as I should be.

Looking at the numbers from 2014 it was clear to me I wasn’t improving.

I was hitting more greens, more fairways, chipping better and scoring better even though my putting stats have flatlined. Because of my idle stats and Andrews simple word, I went head-on into “fix” mode, gathered all my clubs and starting a thorough look into my stroke.

When they were constructing my green I had the company make an area that is perfectly flat with no break or uphill/downhill slope. I can attempt putts from a foot to eight feet and know that if I miss it’s because of the stroke and not the turf.

For this testing session I was more concerned with my misses rather than my makes, it was those erratic misses after all that started this escapade.

That was typical of what I have been seeing over the last half of 2014. Misses all over the place and

That alone was shocking. With the 33” putter I was able to get over the ball so much easier and look down the line at cup more directly. That made my alignment so much more solid and the figures backed it up.

I truly couldn’t believe what had happened.

It made me put all my other putters away for a few days and just putt with the TaylorMade. That was somewhat troubling because going back to an insert was something I wasn’t a fan of. Not getting the feedback from the milled putter was immediately noticeable. Even though my aim was better the feeling was gone.

Here was my dilemma. I had a 35” putter that I love but didn’t putt nearly as well. Compared to the 33” putter I didn’t want to use. The thought of taking my Giannini into Golf Galaxy and getting a new grip didn’t sound very appealing. Also, I LOVE the grip that came on the G6, it’s the Oversized Putter Grip from Pure.

That’s when it hit me, PURE grips are a tapeless install!

I went to their site, ordered up the install gun and the very next day it showed up at my house (benefits of living in the Southwest) and I was able to hook it up to my compressor, remove the Big Dog, hack two inches off the G6 and re-install the grip.

Waiting the entire day to get home and make the change was painful. When I got the notification the PURE grips package arrived, I was ready to go home. Sadly it was only 10 am. The switch took no time. I sprinted to my backyard to see if this was now my perfect putter.

It took about 2 putts for me to agree with my assessment. I had my feel back and I was rolling the ball beautifully. A few days later I did the 40 putt test again.

What do you think the numbers were?

I was beyond surprised. From 8’ hitting 4 balls 10 times just like before here’s what the results were:

I’ve been consistently maintaining those types of numbers on a nightly basis. Some days it’s better and of course some days it’s not. As impressive but for the most part, I’m putting incredibly well. Even on putts with some break, I’m getting the ball to the hole. And, my misses are very manageable.

My prolonged winter break has been depressing since I haven’t been playing.

With this new revelation in my putting game, I’m beyond eager to get out and see how it goes. Also, if this renewed approach can help me show some much-needed improvement in my game.

Who knows, maybe 2015 will be the year I finally break through and score in the 70s. I know its there and now, with this new found confidence in my putting, I know it’s obtainable!

This Carbon Putters story is a must tell. When I first DM’d the crew at... Read More

Lynx Golf; the return of a legendary brand to America. At least to North America.... Read More

My original Rukket Net was in dire need of an update. And boy, did it... Read More

The Rapsodo MLM is going to change the way you practice. That is a bold... Read More

The latest shoe to leave the TRUE Linkswear warehouse, the TL-01, is a winner! If... Read More

It’s that time of year again! Without further ado, we bring you the 2019 Breakfast... Read More