Golf is back, kind of, so I took some new Uther Towels out for a spin.

As the country starts to move forward with re-opening the states, Indiana has announced golf is back. Because of that, I was able to sport some new gear on the course this past week.

The Breakfast Ball was lucky enough to receive some new towels from Uther. 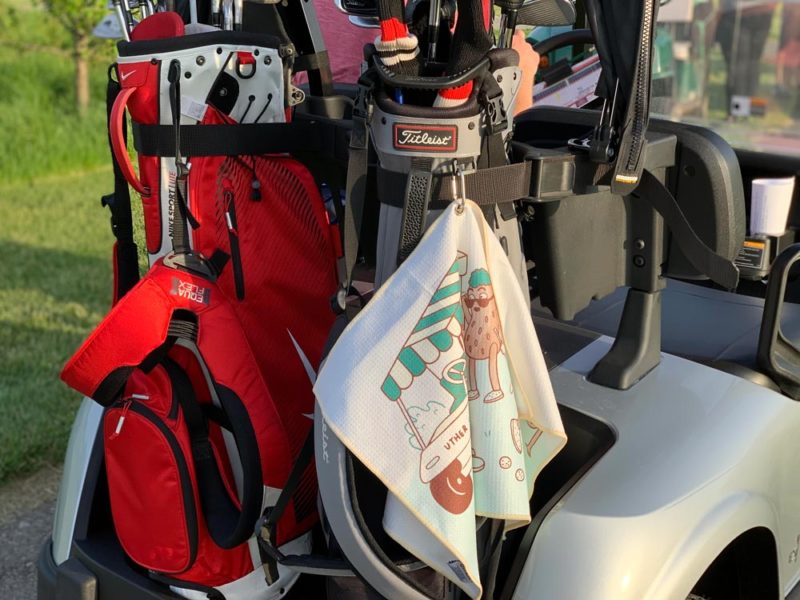 Per the Uther website, have you noticed that all golf bags look the same? Uther has set out to fix that issue. After working in the golf industry for many years, they noticed that there is no way to differentiate or customize golf bags truly. As every type of golf gear continued to advance, golf towels remain stuck in the past.

After their launch in 2016, they decided to take the golf towel industry by storm by creating the first fashionable and highly functional golf towel line.

“Uther is the creator of the first fashionable golf towel. These premium microfiber golf towels feature unique sublimated prints and designs that make a fun accessory for both men and women golf bags. Use the microfiber towel to clean and dry your clubs, golf balls, or hands!”

I was able to take a few of these towels out on the course to see how they stacked up against the current towel I was using.

When you get this product, the first thing you notice is the material, but they come attached to a piece of sturdy cardboard that shows they are a company that cares about every aspect of their product.

After opening the towel, the next thing that took my attention was the material. In my experience, most golf towels that I use are just a regular towel. For example, if you want to be like me, then you could take your mom’s kitchen rag off the counter and put it on your bag and boom, you’re like me. 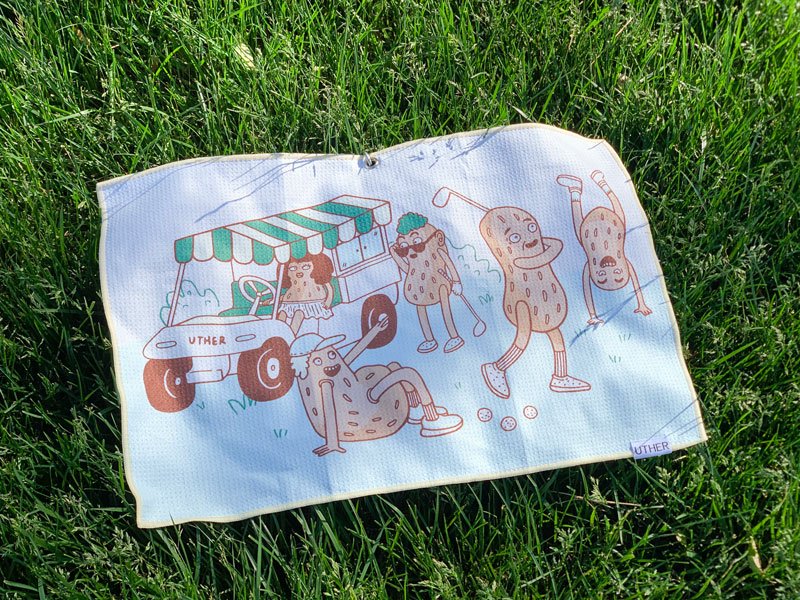 The difference between the Uther towel and the towels I was using is the microfiber. What does that mean? Well, it means that these towels are going to help you get the mud and dirt off of your clubface instead of rubbing it in even more. So those chunked shots won’t linger with the mud in the grooves. They instead get wiped smoothly away.

When I was on the course with these towels, it had just finished raining.

And if your home course is anything like mine, it gets wet, and it stays wet for a while. That means your clubs aren’t staying clean for too long during your round. I was able to clip this towel right on my bag and clean off the clubs whenever I needed it. 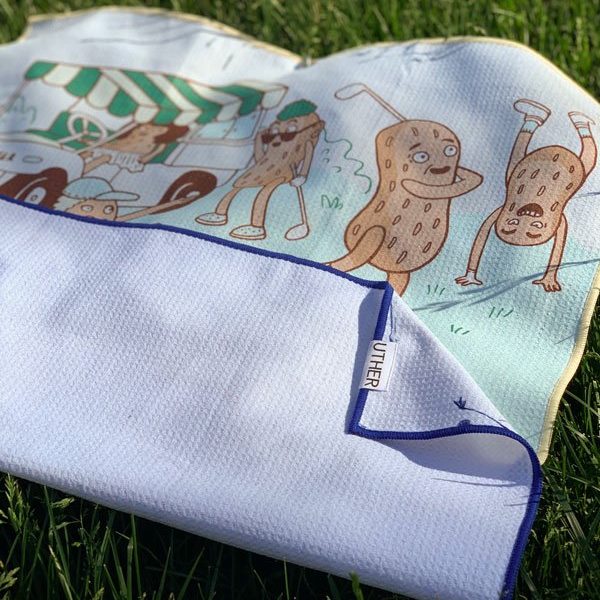 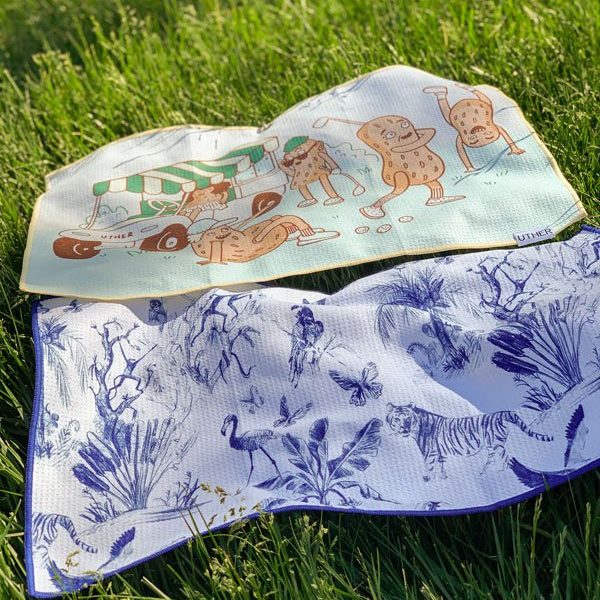 For example, I was on the fourth hole of my local course on Thursday and hit the perfect shot to use this towel to its full potential. Now, the shot itself wasn’t great because I got a little too much dirt and left the shot a few yards short. 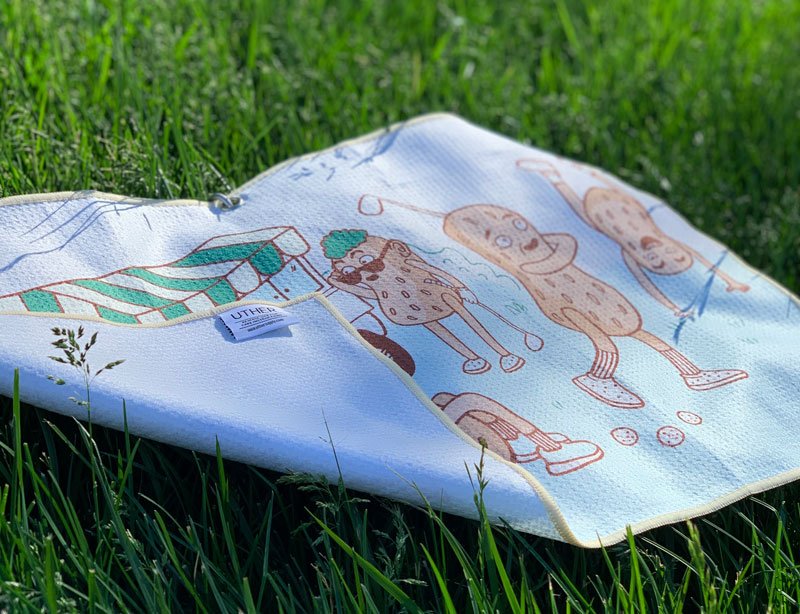 After just a few wipes with my new Uther towel, my club was ready to go for the next shot. That’s what the microfiber technology is there to do. Get your clubs clean and keep your game sharp.

I think the most impressive part of these towels was the fact that they have so many different designs.

The towels that I received were from their Spring ’20 collection.

I went with the “Golf Nuts” cart towel and the “Jungle Jam” cart towel. I wanted to pick some that had some humor but showcased the quality at the same time.

The “Golf Nuts” towel was full of peanuts as humans playing golf because they’re nuts about golf. Get it? That was my favorite towel in the collection, and I couldn’t have been happier with the final product. 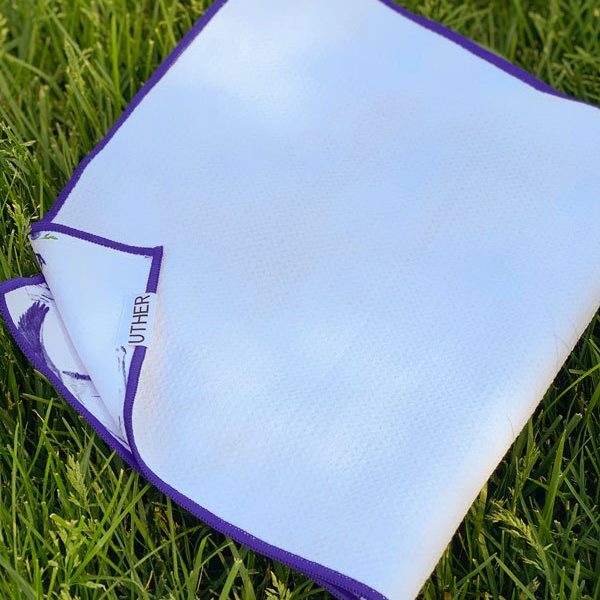 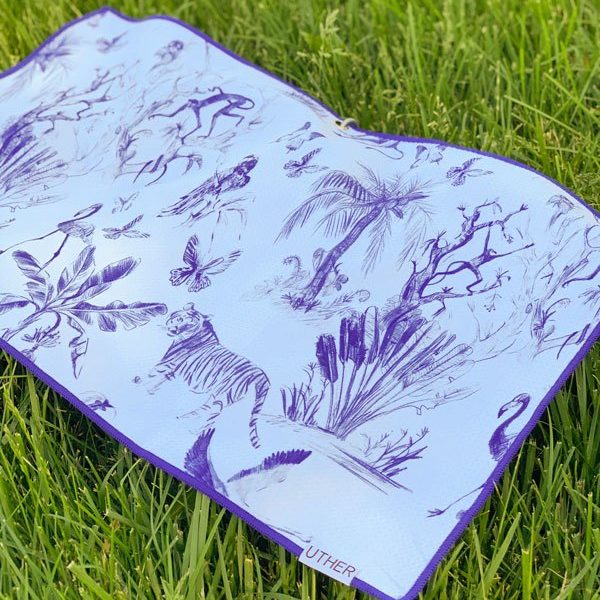 The fact that they were able to get a design on this towel and make it look as great as they did is impressive. Uther didn’t sacrifice any of the quality in their attempt to get the design on their towels.

All in all, this product is great for any golfer looking for a way to stand out.

Uther towels are a great way to showcase your personality on your golf bag and also have a towel that will be there for you whenever you need it most.

And be sure to give them a follow on their social sites as well:

Tyler Clerkin is an avid golfer who has developed a deep love for the game. He strives to deliver the best content possible for fans of the site by using his knowledge of the game in all aspects from equipment to current events happening on tour.