A few days later I’m still sick to my stomach.

I try to keep my opinion of what happens on the PGA Tour to myself. I’ve found out that not too many people care what I have to say about a PGA event. So I’ve separated myself from commentary when it comes to the pros.

But today, I’m breaking my own self-implemented rule. It’s time to chime in on what took place at the 2012 Ryder Cup.

I’ve always been a fan of watching golf on TV.

Even when I was a kid, I loved watching the weekend coverage of the tour events. Back then though, it was just something that was on TV that was enjoyable to watch. When I threw myself back into the sport I started seeing the game in an entirely new light. Being a lot more involved in the game has opened my eyes. Golf is an amazing sport. Going back to 2010, when I started playing again, I could sit down and watch the Sunday action unfold and enjoy it.

But as the last several years have passed, and my knowledge of the game has grown I’ve evolved from a casual fan that loves the game to a complete freak that honestly looks forward to the broadcast of “On The Range” on Wednesday nights just cause it’s that much more PGA coverage than there was last year.

The Ryder Cup means so much more now.

It’s easy to understand that while I was interested in the 2010 Ryder Cup, it wasn’t anywhere near the level of interest when compared this year’s cup battle.

Technology has advanced and data is more accessible and easier to get for events like the Ryder Cup. From the phone app with the live coverage to The Golf Channel and Twitter. The amount of data you can obtain seems endless and I was soaking it all up. I had to work Friday and Saturday, but Sunday was going to be my day. I planned to veg out on the couch and watch the nearly 6 hours of coverage on NBC.

The start of the singles matches was amazing. Watching Bubba Watson entice the crowd to cheer louder than they thought possible WHILE he hit his tee shot was something I had never seen if he just would have hit the fairway it would have been an unforgettable moment for sure. Then RoryGate happened.

When I first heard the news that Rory was nowhere to be found 20 minutes before his tee time I was stunned. I mean it is Sunday at the Ryder Cup right? How in the hell does that happen? Overslept, wrong time zone (which explains his lateness to Friday and Saturday’s matches, right?) or whatever.

My only comment on RoryGate is I think he is very, VERY lucky he wasn’t paired up with Tiger or Phil. I would hope, had that been the case that they would have been able to capitalize on it and early.

Rory is just as good with a couple of minutes on the putting green before the biggest round of the year as he is with several hours to prepare. So much for using that excuse anymore, thanks, Rory.

As bitter as I am about the loss I do have to hand it to the Euro team. It could have been very easy for them to believe that it was a miracle win for the US team in 99 when they came back from the same deficit and won the Cup. Nope, not at all. They showed some fight in themselves that impressed not only me but my wife as well. Jumping at the opportunity, I gave my daughter a little life lesson. I told her “No matter how bad it looked they never gave up and gave 100% until the end.”

I was still relatively confident that the US Team was going to pull out the victory.

Even after Webb Simpson’s shank shot, that was until Phil Mickelson just missed his chip shot on 17, and then Justin Rose dropped his unbelievable birdie putt. WOW! What a putt that was. It went from the match being over to a draw and then Rose’s Birdie on 18 sealed it. Brandt Snedeker getting taken out to pasture by Paul Lawrie did help much either. You have to wonder if the playoff’s and Snedekers run to the FedEx Cup might have been a bit much for him to continue at that level for another weekend with the pressure being so much more intense.

The final matches concluded and I sat there staring at the TV and my twitter feed just shocked at what I had just witnessed. The Euro’s had to win 8 out of 12 matches to retain the cup. That’s eight matches against arguably some of the best golfers on the planet. Luke Donald was nearly flawless in his match against Bubba, Ian Poulter again showed the world why he is one of the best match players out there right now. Rory puts an end to Keegan Bradleys incredible weekend, and I already talked about how Brandt and Phil ended up.

Dustin & Zach Johnson looked great in their matchups between Colsaerts and McDowell and thankfully so otherwise, it could have been a Chicago Massacre. Jason Dufner took his match against Peter Hanson, and Matt Kuchar fell to a revived Lee Westwood who was anything but great on Friday and Saturday in what I think was a bit of a shocker.

When Jim Furyk lost to Sergio in his match the Euro’s had made the improbable comeback and only need 1 point to retain the cup. The two remaining players on the course for the US team had a combined record 0-6 so far. The only thing that was remotely enticing was one of them happened to be Tiger Woods. 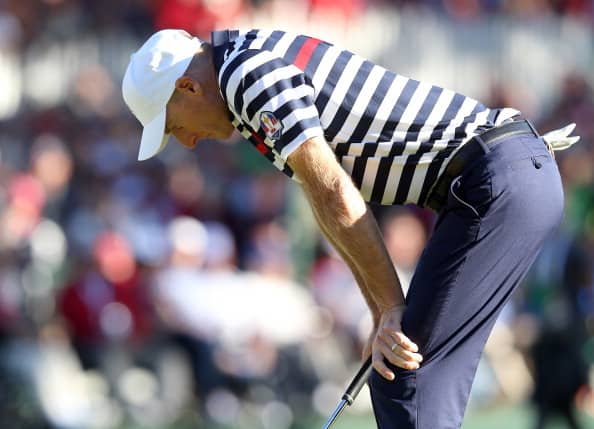 I have no idea how the final days’ players are chosen to go out. But, you have to believe that Tiger asked to go last. Can you think of anyone that would not want Tiger out on the course early putting the proverbial dagger in the hearts of the Europeans and Tiger cruises to an easy victory? I mean, that’s what I was thinking. When the pairings came out, I was stunned that Tiger was the last match. Only needing 4.5 points to win the cup I saw Tiger going out 5th or 6th to be the deciding score in winning the cup back. Last? What was that? I just don’t get it.

I don’t want to harp on the American team for the way they played.

Honestly, I don’t think they played that bad; something is lacking though. That killer instinct to go out and roll over your opponent isn’t there. I felt that Davis Love III was going to be an ideal captain for the US Team. But, the more I’ve read about the events of the weekend I’m starting to think he lacked that “I smell blood” needed to push our guys over the top.

Here my suggestion for the 2014 Ryder Cup Team USA Captain: 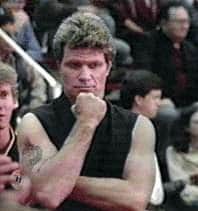 I’m hoping that the US can continue its recent trend of putting out some fantastic young talent.

And with that talent will come some fight that I think some of our veterans have lost. Maybe some of these great young players that are just about to break through to the next level watched as I did this last weekend and want nothing more to be a Ryder Cup participant to get the chance to kick some Euro ass!

Maybe the Hunter Mahan snubbing puts a fire under his ass. We need to see some fantastic golf from him over the next two years. I know he can do it, we’ve all seen it. Maybe in two years, I’m writing my wrap up of the 2014 Ryder Cup, and instead of this sour taste in my mouth, I’m talking about the most excellent weekend in golf.  Maybe. Guess we’ll have to wait and see.