I’ve been using the Spakesology Ball Marker, and so far I’m a huge fan of what I’ve been able to accomplish.

Who doesn’t like a training aid, right? OK, maybe not all training aids are wildly fantastic. Some are just plain awful, which is what makes doing a review of these gadgets and gizmos all the most complicated. You don’t know if the purpose of the device is suited for you or your game until you try it!

What I like about trying different training aids is when you find one that works it can instill a new level of confidence in your game. For example, the Putter Wheel that I reviewed last month is an excellent tool that I use all the time now. Had it not been for a wrong turn at the PGA show I might never have found them, but thankfully I did. I’m stroking my putts better than ever, and it’s one of the reasons.

The Putter Wheel is excellent to warm up with before a round, but once you’re on the course, it has to stay in the bag.

I’m nowhere near a rules enforcer, but I do like learning the proper way to play, and I try my best to abide by them. Good news is I recently made friends with a certified USGA rules official so a lot of my questions will now have a source for answers because that rules book can be just a bit confusing if you don’t comprehend what you’re reading.

The reason I bring up the rules issue is that when it comes to training aids, there is a place and time for them, and during a round isn’t that place. They are designed to help you with your game off the course, so when you’re on the links, you’re better prepared. 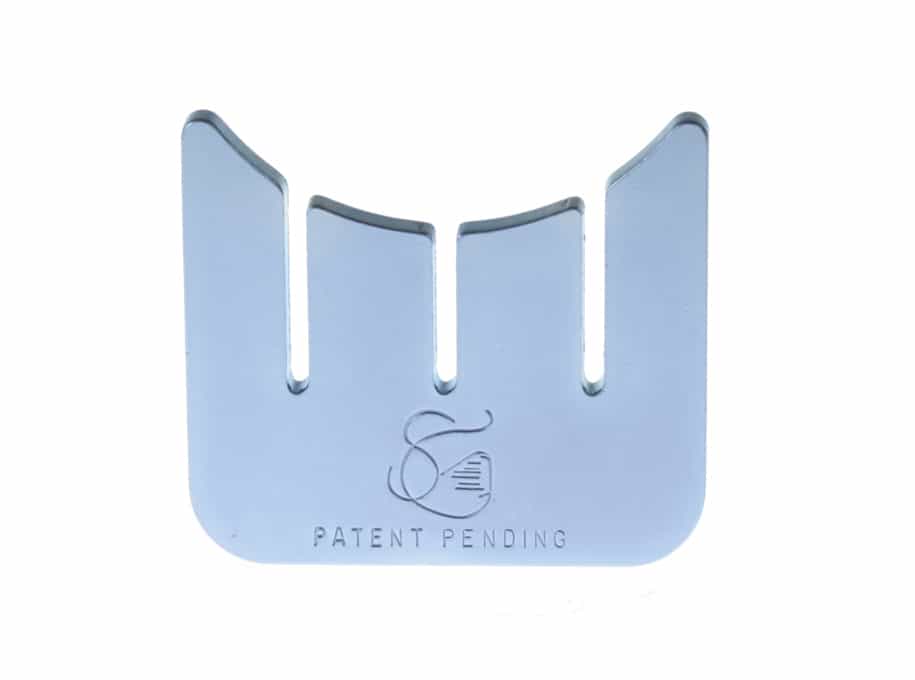 Where the Putting Wheel hasn’t benefited my game, through no fault of its own, is my alignment. I found out just how much it wasn’t assisting with my alignment when I started using the Marker and witnessed a significant change in how I was getting the ball to the hole. 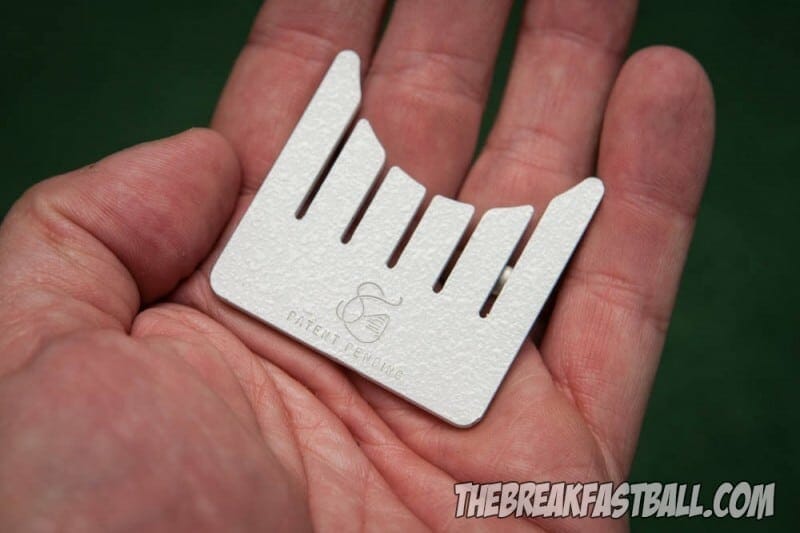 The Spakesology Ball Marker is a rather exceptional tool in my opinion.

Where some may see it just as a uniquely cut ball marker, it’s those cuts that separate it from the norm and into a highly valuable training aid. The best part is you’re not limited to the putting green; you can take this one out on the course during your round and use it!

Before I go into how you can and can’t use the marker, let me first explain what it is that makes the Spakesology Marker so different.

There are three applications that I’ve found so far with the Spakesology, and if you take into consideration that it would probably do some damage as a Ninja Star, you can bump that up to four. Seriously though the three ways, you can use the tool are a Ball Marker, a sight alignment tool, and a putting aid.

In its purest form, the Spakesology Ball Marker is just that – a ball marker. In the process of using the tool to align yourself with the putting line, the marker is placed behind the ball with the slots pointing towards the hole or your intended path. 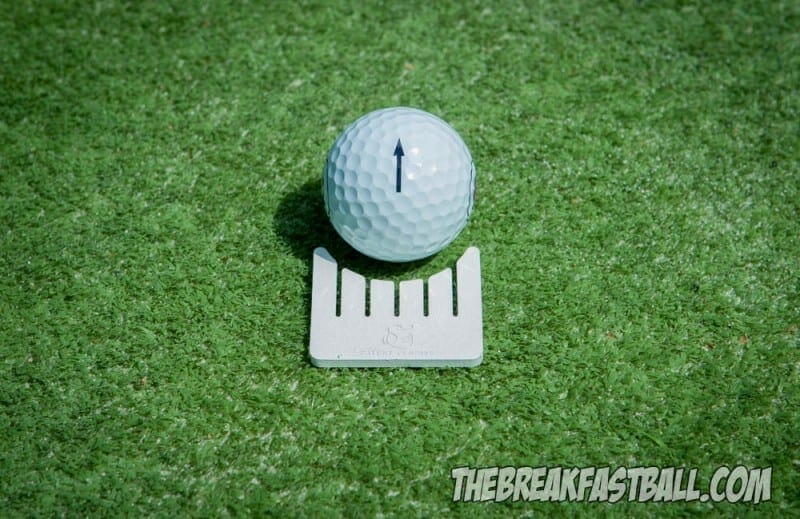 The crescent cutout that coincides with the shape of the ball makes placing the marker straightforward and quick.

Alignment is where all the mustard is when it comes to the reason for having the Spakesology Ball Marker in your bag. Not being appropriately aligned will have a negative effect on your putting. It could also lead to someone looking at other avenues of their game in an attempt to fix their putting woes. Just like yours truly. 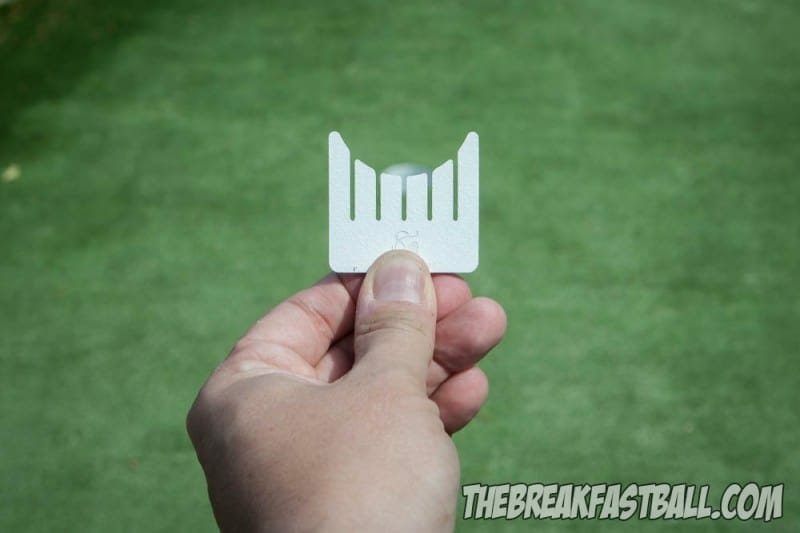 After my first session with the Spakesology, I walked away in disbelief.

My alignment was so off it was insane. Here is how the Spakesology Marker works:

The ball marker and alignment parts of the Spakesology alone are worth having the tool in your bag. But, when I found out you can use the marker for a putting aid as well. That was a game changer.

Because the Spakesology Ball Marker is somewhat on the heavy side and is flat, it lays down on the grass very well. You can make a stroke on the ball and not even come into contact with it.

What that means is you can line up a putt with the tool and replace the ball after every stroke and have the same putt. We all have gone out to a green and dropped three balls down from 15’ and putted, right? With the Spakesology Marker, you can leave the marker down, retrieve the balls (hopefully some from the hole), and go back to the same place and make the same putts again.

For me, that was an added benefit I loved.

My nemesis on the putting green is a left to right breaker slightly downhill; it’s a round killer. With the Spakesology Marker, though, I can line up that putt, make three or four strokes from that spot, then go back and work on the same putt, over and over again if I choose too.

Just make sure you remember to pull the marker away on the course. Practicing with it in place on the putting green is fine, but during a round, it can’t stay in place.

What blew me away was finding out just how poorly I’ve been aligning myself with the hole. The first time I set the marker down on a straight 10’ putt and stood over the ball ready to putt, I thought for sure I had done something wrong.

Sure enough, though, after taking the stroke, the ball rolled beautifully to the center of the cup.

Standing over that first putt, the thoughts in my head were “Where in the hell are you aiming?” It was a little discouraging to find out that for the last couple of years I’ve been off on my alignment. 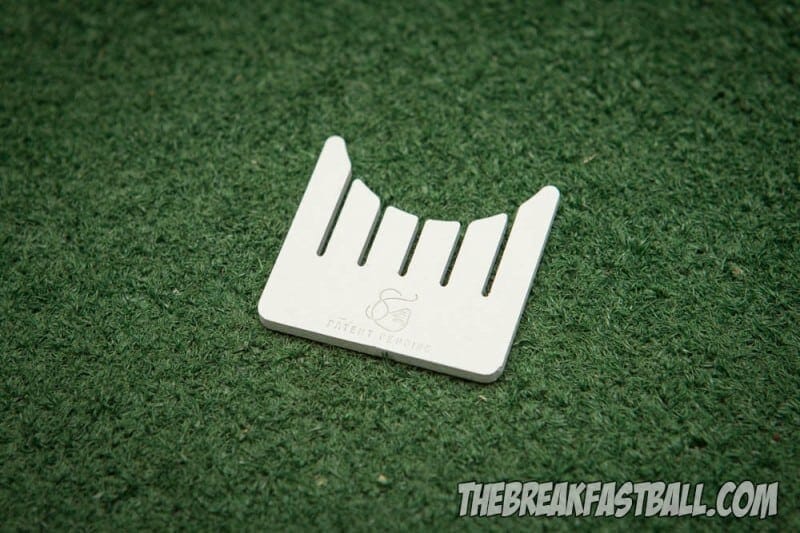 I decided to perform a test to see if I was as off as much I thought. I took that same straight putt but instead of 10’ I moved up to 9.5’. From there I lined up a putt the way I used to. Crouching down with the ball out in front of me. I aimed the alignment line on the ball at the hole. I then stepped back and with another ball from 10’ feet used the Spakesology Marker.

The difference was disheartening. It showed me that I’ve been lining my putts up to the right of the target. Which makes sense because I miss more on the right side than the left on straight putts. I’ve been blaming my stroke and putter when all along it looks like it’s been my alignment.

And I’m starting to get a better feel for it. It does take a little getting used to. Being fixated on using the tool, I tend to forget about my pre-shot routine. That hurt me a few times the last round I played where I left a few putts short. 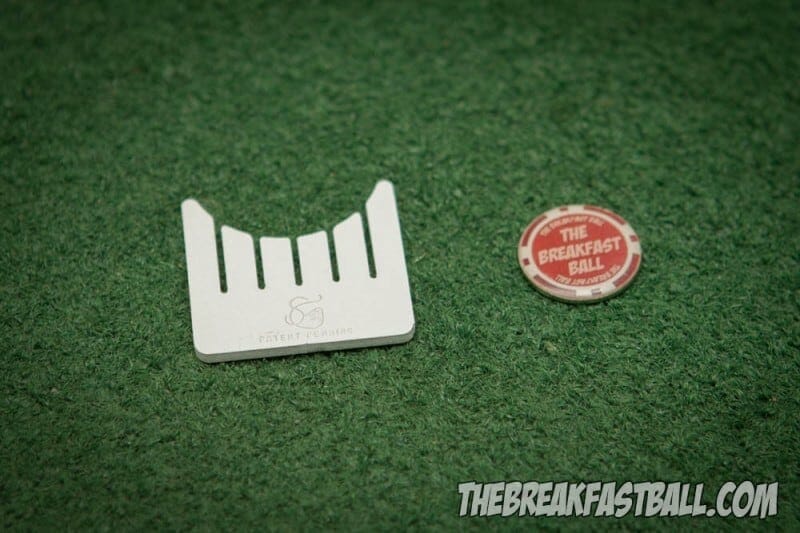 Overall I’m happy with how the Spakesology Marker has allowed me to align myself better to the target. The ability to be able to hit the same putt during a practice session is worth its weight in gold! Which comes to $1,778 in today’s market, I looked it up!

The weight comes in at 1-3/8oz. Which is more than likely much heavier than your current ball marker. The Spakesology Marker, however, fits nicely in your pocket and doesn’t cause any distractions.

Depending on your choice in style, metal, or powder coating options. 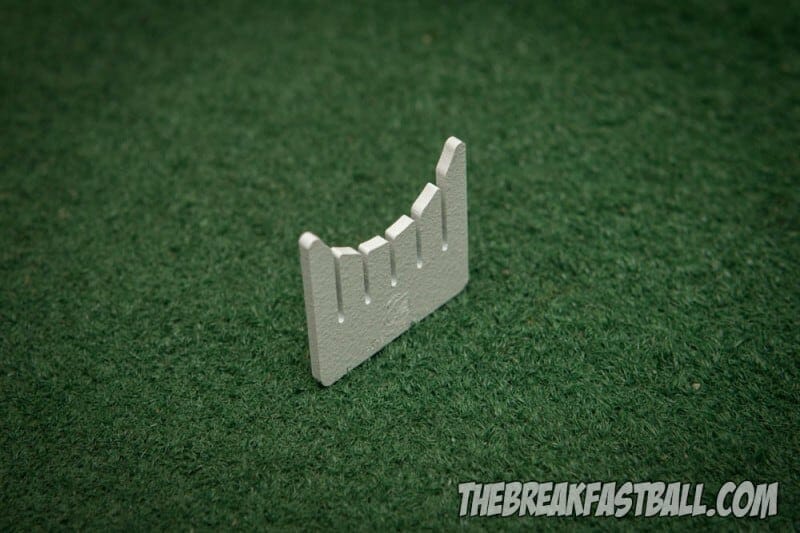 You can see all the available markers on their website, as well as some holders for the markers made from the fantastic people at Appalachian Leather Works, by visiting the Spakesology Website.