This past Saturday I attended a TaylorMade Demo Day at Rio Secco Golf Club. The demo was from 7:30 am to 11:30 am and I had a ton of things to do Saturday so I left the house early trying to be there right at 7:30 am 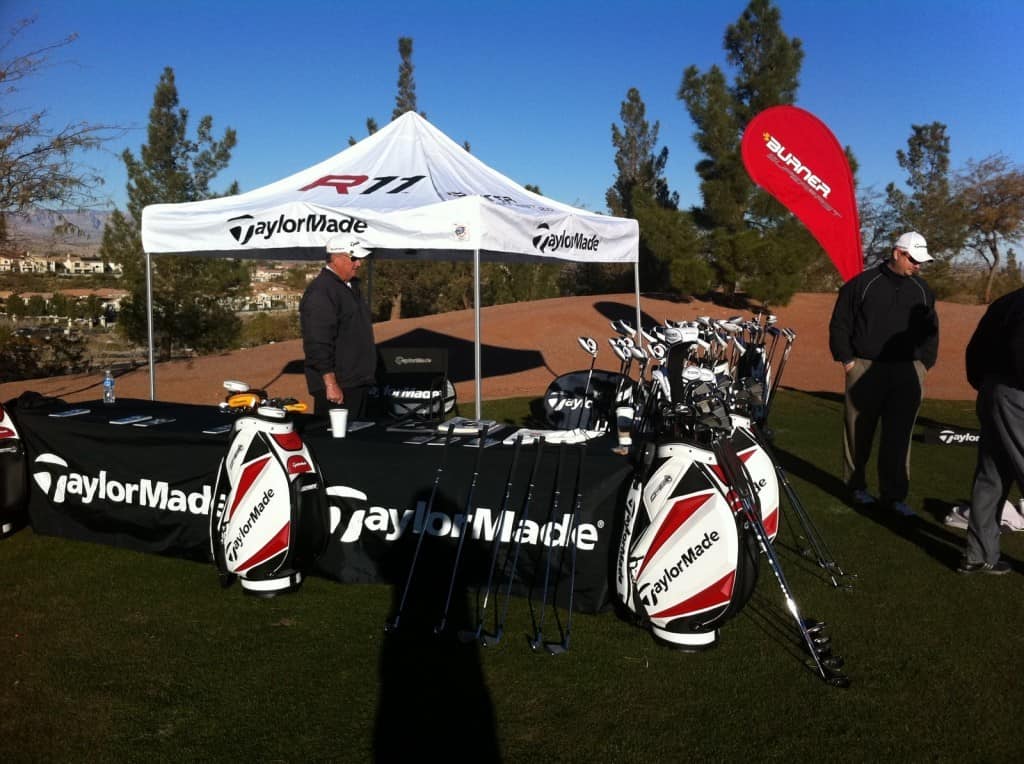 It was gorgeous outside. No wind, clear skies and the temperature was in the mid 50’s. When I got out to the range, the TaylorMade guys had just got done setting up the tent and were ready to go.

Spoke with one of the gentlemen and let him know I was there to test out the R11 of course! He said to grab an iron and get warmed up. He asked what I was swinging now and said he would return in a few with the R11.

The iron I happened to grab was a new one that’s not available yet, which I found out later. It was a Tour Preferred CB iron. Holy shit this was a nice stick. I’ve never really been fond of TaylorMade when it came to their irons, but this one felt so good. It was a 7 that I had grabbed and from the first swing I took, I was impressed. The club felt so good at impact and I was launching the ball. I hit about 15 balls and I can honestly say I was happy with every single one of them! It was a great way to start the day!

The TaylorMade Guy (TMG I’ll call him from here on out) said he was ready whenever I was. I hit my last ball then feasted my hands on the most talked about driver, I think EVER.

What a sweet club it is. I saw one last week at Las Vegas Golf and Tennis, but it was just on display. The “TMG” set me up to start with the basic setup. After a few swings, he made some adjustments and added the weight to the toe end and changed to the closed clubface setting. That, along with a tip that I was addressing the ball WAY TOO far in front of my left foot, made the next fifteen minutes a joy.

Shot after shot I was creaming the balls down the range. The impact of the R11 is astonishing. It was like I was hitting a soap bubble with it. I didn’t want to put it down, but after plenty of swings, I figured I had swung it enough.  Since I wasn’t there to buy, I gave up my tee box.

I chatted with the “TMG” for about ten minutes after that and he talked to me about the club and the irons I was hitting. He told me I have a nice swing with good club head speed and to keep at it.
I’m not sure if I’m the right person to “review” a driver, considering my HDCP index and all, but I will say this is one VERY nice driver. .

I spoke with the TMG and he was explaining to me the versatility that comes with the R11. The ability to make changes as you either progress or regress is an incredible feature. I would have liked to have had more time and made some more adjustments to the club just to see ALL of what it can do, but that was all of the time I had worked out for me and I was thrilled that I had gotten the chance to swing it.

The group of TaylorMade guys that were there was so nice and pleasant to talk to.  They really have their shit together. They were as laid back as could be but were still as professional as it gets. I had a blast and will definitely be attending any other demo days that I can. It didn’t hurt that this one was at my favorite golf course and was only 10 minutes away from my house!

I don’t plan on going out and getting the R11 anytime soon, I have a nice driver that isn’t even 8 months old, and I like it! But, I will say this when I’m in the market for some new irons I will be definitely looking at what TaylorMade is offering because those Tour Preferred CB’s are incredible!