The DVC and our record setting day in Furnace Creek

WOW! What a day Saturday was. What I was expecting was nothing like what took place and that was for the better. The DVC is done and I think it was a roaring succes! We arrived in Furnace Creek around 6:15pm and got all checked into our room. The hotel was actually really nice. It was a one story, former dorm room to the borax mine workers, that has been highly upgraded compared to when it was home to the miners. We had a nice view of the pool and the large grass area that’s there on the grounds. There were tons of people all over the place, it took us almost 20 minutes just to check in. The were literally people EVERYWHERE!

A short walk from our room is the small little Village area of Furnace Creek. There is a Steakhouse, a saloon, a cafe’ and a very large very nice General Store that has everything you could ever need while trekking across the desert. If not for the intense heat you really would have no idea that your hanging out at -200 below sea level.

We enjoy a nice meal at the steakhouse and then headed back to the room. On our stroll back to the room we took a detour and headed over to where the course runs right along the hotel and ventured our way onto the 16th tee box the 15th green and the 15th fairway. The first impressions were good ones. In all honesty I wasn’t expecting much, I mean heck it’s 120° almost everyday in July so some grass would have been nice, this though was great!

The green was looked fantastic and so did the fairway. Now mind you, this was just after sunset so our vision was a little off on how well we though the course was but regardless as we stood there on the 16th tee box looking down the fairway into the dark it made us feel good that we were actually standing on a very, very nice tee box.

5am came real early but that was ok, I’m used to it, for me this was actually getting to sleep in a bit! We got up got ready, loaded the car with our gear and took the incredible long forty-second drive to the Pro Shop.

Much to our surprise right after we pulled up another group of four were right behind us. No way were they beating us out, we had business to get done!

I got Charlies attention by tapping on the Pro Shops door glass window and waving my hands. He looked up at me, then looked at his watch and then back up at me and headed over to the door. “You’re early.”  he spoke with a befuddled tone. Charlie turned out to be one of the many joys we encountered while making our way around Furnace Creek. When you get to meet really good people who do nothing but bring a smile to your face when they talk it’s hard not to enjoy yourself. That’s Charlie, he was awesome!

We hit the first balls of the day at 5:45am local time and we were off.

I’m kicking myself now for not taking more video or more photos but the truth of that matter was I was enjoying myself so much that sometimes it just slipped my mind to grab the camera. For instance on the 3rd hole of the day when we pulled up to the green, just on the other side of the cart path (some 30 yards away) was a Bobcat getting a drink of water from  a puddle that had formed from the overnight watering. That was way cool, but two holes later we saw something really special. A family of Coyotes had wandered onto the course just in front of the tee box on the par 5 fifth hole. We sat there for a few minutes and watched as the pups played chase with each other running up and over an old fallen tree truck. That was really neat to watch.

Ok, back to the golf.

We got really lucky with the weather. Mother nature blessed us with a beautiful day. We got in about five holes before the sun decided to show itself. That made the morning round so nice. The heat wasn’t even relevant yet and I was playing pretty good to start.

We finished up the first 18 in about 3 hours and went from the 18th green right back to the 1st tee. The weather was way too nice to hesitate getting back out on the course so off we went.

Slowly the course began to change. There’s a natural springs that the course sits on top of and during the hot summer months as soon as the sun goes down the sprinklers come on and then when daylight hits to go off. They water all night long and it was obvious in the first round. The second round for the most part was pretty much the same, the greens were still a little slow and the was some mushy areas of the course you certainly wanted to avoid but all in all the place was in great shape if you considering where it is. As the holes went by in that second round we started to notice the small changes to the course. The balls weren’t stopping on the greens as fast as they were earlier and the putts were starting to get a little tougher to read.

After we finished the second round we planned on getting something to eat at the coolest 19th hole I had ever seen. 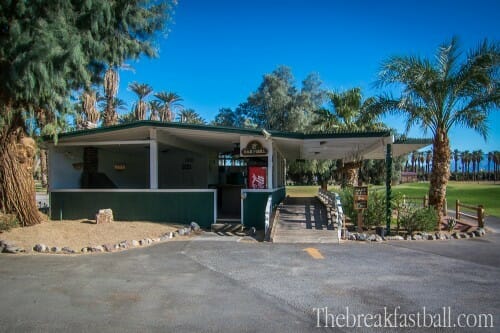 Sadly since we were the only people on the golf course (the foursome from the morning was nowhere to be found after their 18) it really didn’t make sense for them to open the place up. So Charlie said he’d watch our bags for us and we headed off to the General Store to get some grub before we started round 3.

Here’s our score cards from the first two rounds. 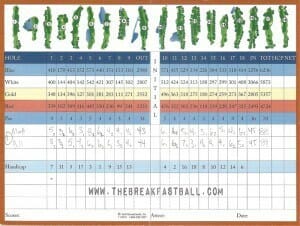 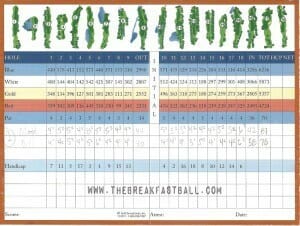 Stay tuned for part 2 tomorrow. I’m just exhausted after this past weekend and work today. Thanks for reading!