The third round started off pretty good for the both of us. That was until I got to the 3rd hole. If you haven’t seen this yet check it out:

Not one of my more finer moments out on a golf course. If that third swing would have been the first one I would have been sitting a whole lot better than what actually took place.

We made our way around in pretty good time. There was no mistakes on where the next hole is (yeah, it’s a little confusing in some spots) and we had a really good game plan on how to play the tougher holes. Not that it helped me out much but Bill was playing great. He shot 41 & 43 for a third round score of 84. I tailed off considerably in round three.  I made a bunch of costly errors, like the above video, and I just couldn’t get into a grove. I did manage to run off three consecutive pars at 16, 17 & 18 to save my round and end with a 95 (48 & 47)
Our final 18 holes was a blast. Charlie had informed us that this would be our last go around because the course closes at 6pm.  Getting in the last 18 holes wasn’t going to be a problem at all we had plenty of time, enough that we didn’t need to rush at all. If it would have been 7pm we would have thrown it into high gear and would have been able to make another 18, but the rules are the rules and finishing 72 holes was still going to be a great accomplishment.

I was actually having a fairly decent round when we made the turn, I was only down two strokes to Bill and played the back at an average of 45 over the first three rounds. There was a real good chance of shooting another round in the 80’s. That would have been the icing on the cake! Well that dream came crashing down when I posted a 10 on the beast of a hole, number 10. Prior to round four I had scored a 6, a 5 and a 6 on that hole so having a bad hole was nowhere in my mind. If I bogeyed that hole I would have ended the day with an 88 shooting 44 & 44, but no. That 10 hurt and it hurt bad. I had a couple of bad holes over all 72 and that’s to be expected but a 10! I ended up posting a 92 (44 & 48) not a bad finish but deep down I was bummed knowing that it wouldn’t have been that hard to put up three scores in the 80’s.

When we finished up (Bill by the way shot an 81 the last round) we headed into the Pro Shop to thank Charlie for being such a wonderful host. He returned the compliment by letting us known that he was really impressed with what we had done out there on the course. 72 holes in July was a bit of eye opener for him. I thanked him of course and let him know how much we appreciated his awesome customer service and that it was a pleasure for us to have played here. That’s when he told us that as long as he’s been working there, which is a long time, he’s never heard of or known of anyone who has played Furnace Creek 4 times in one day. He mentioned that there are a few people who come out and play a couple of rounds each for several days but nobody had or has ever played from open to close and finished 72 holes. 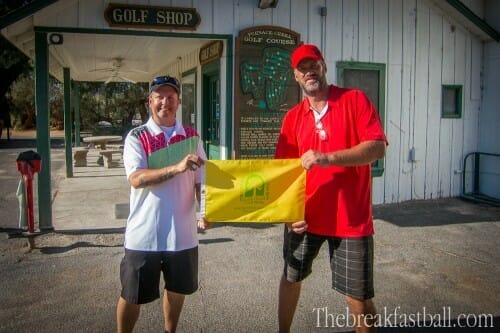 That made my day.  I was just happy we finished when Charlie dropped that little nugget of info on us. It’s not the best or coolest (no pun intended) record but it’s our’s and it’s one of my proudest moments.  Well that’s not entirely true. What I was most proud about was that I had come up with this idea, put it into action and pulled off a fundraiser for The First Tee of Southern Nevada in a ridiculous location, in crazy hot weather 200 feet below sea level and in less than 4 months! Score one for the good guys! 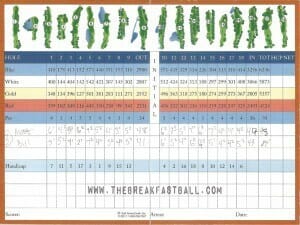 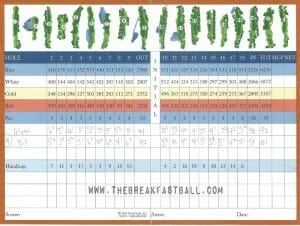 I already have a ton of ideas on whats going to take place next year. Bigger, better more involvement from more players it’s going to be amazing, but PLEASE everyone let’s not forget what this entire event was about. It was great that we set a record and it was even better that I recorded my lowest round so far but we did this silly stunt for one reason and one reason only. To raise money for The First Tee of Southern Nevada. We have received a ton of support from a vast variety of people and without all of their help this wouldn’t have been a success in my eyes.

I’ve been told by more than one person that if I were able to raise $500 that I could call this event a success. I didn’t think so and set my goal at $1,000. I figured if two regular guys who grew up in Vegas and just love to golf could come together and raise $1000 or more for a very worthy organization that we might inspire more people to do the same for somethings that deem worthy. So far we have collected just under $700. So this is my final plea to all of you out there, if you haven’t made a donation because of whatever reason take a look at what we did and why we did it. The Kids, bottom line. Then, if you can, help us out by getting us to my $1,000 goal and let EVERYONE know, even the Kids at the First Tee that with a little Perseverance a little hard work and a couple loose screws upstairs in your head that you too can do anything when you set your mind to it!

Thanks everyone! Without all of your help and support we would have been just two idiots playing golf in the middle of Death Valley just cause it was there. Yeah, I know. That still was the case!

By the way, since we knocked out the lowest golf course on the planet at 200 feet below sea level, does anyone know where the highest course in the world is?