Legacy Golf Club: The “McClary Takedown” will have to wait.

I thought for sure at Legacy Randy was going down!

I had a great opportunity this past weekend out at Legacy to finally beat Randy straight up, but I came up just a few stokes short. We both played kinda crappy and couldn’t belive that when it was all said and done we both had recorded rounds of 93 & 95. The way I was putting I thought for sure I was going to hit the century mark. Not that my putting stroke had vanished, heck after all the improvement I’ve shown over the past couple of months I’d be sick if that was the case. What happened was we played on the slowest, longest cut.  most unpredictable greens I have ever played on in my life!

Legacy had just got done overseeding the previous weekend and the course was in fantastic shape. Minus of course the few little areas that hadn’t fully come in yet. We had to play “Cart Path Only” which I hate, but considering how nice the overseeding had gone I completely understand why they do it. The greens though, were a joke. Don’t get me wrong they looked absolutely fantastic but they played like some 70’s shag carpet. Twenty feet out and you were almost guaranteed a 3-putt. What made so difficult to play on was the was no way to judge how the ball was going to react as it got closer to the hole. You had to smash the hell out of it just to get it to stay on-line. I’m pretty sure I didn’t put one ball past the hole all day. One instance I had a three-foot, straight, not break, uphill putt for par, I hit the putt and the ball moved literally five inches to the right just a few inches before the front edge of the cup. That was just horse shit.  The rough was another situation that didn’t help. Well that’s not entirely true, the long rough saved my ass a couple of times. 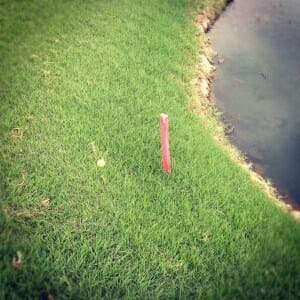 There was another instance where I flew the green on a Par 5 that was a complete mental lapse. I thought I had grabbed my 7I and after I hit this fantastic shot as I walked back to my cart I saw my 7I still in my bag!! I looked at what I just hit, my 6I,  and almost crapped my pants. I thought for sure that I flew the green, the backside of the green, landed on the street behind the hole and bounced into a yard on the other side of the next tee box. Once again the long rough saved me at least 3 strokes by allowing the ball to only advance a few inches from where it landed. Three months ago that ball would have been history!

Those two instances above and another lucky break on a ball that was headed into a lateral hazard lead to my first round that I’ve played penalty free! Yep! 18 holes of golf and not one penalty. That was nice, if we would have had some decent greens to putt on I think our scores could have been at least 5-6 strokes better if not more.

My driving didn’t help much either. I ended up with one of the poorest Fairways hit percentage I’ve had in a while. 28.6% only hitting 4 fairways. Everything was left, but not a bad left. They were not hooks or snap hooks. Just straight left. I’ve been playing a high fade with my driver over the last couple of months but as I’ve been working at improving my shoulder turn and being more consistent with my tempo the fade has slowly dissipated and a more straight ball flight is starting to take shape. I just need to realize that the next time I play and adjust my alignment on the tee box better. Had I been aimed more at the center of the fairway then the left side I could have easily hit a lot more fairways. 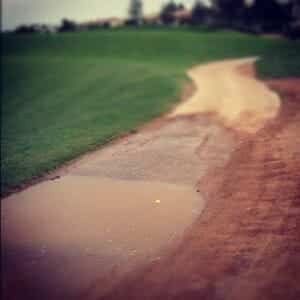 All in all I had a really good time Sunday. Even though I didn’t beat Randy I played smart golf and I didn’t allow some of the bad breaks to kill the round for me. This was definitely a momentum builder with the Winter Classic only three months away. The slower tempo and more emphasised shoulder turn is starting to show some good results and I couldn’t be happier with where my game is right now!

It’s been brought to my attention that I left out a critical moment of the day.

I was up on Randy by one stroke as we made the turn. I hit a very poor tee shot at the par 3 tenth and ended up scoring a double there, Randy made Par and quickly took over the lead. The proverbial nail in the coffin took place on the next hole. Both of our tee shots missed the fairway. Mine was left and sitting somewhat on an uphill lie in the rough about 170 yards from the green. Randy was 15-20 yards behind me on the right side of the fairway in a bunker. My first thought was “nice!” here is a golden opportunity for me to get a stroke back. Randy though, saw it a different way. He hit an incredible bunker shot that was a jaw dropper.

Then, to top that shot he sank the 35′ putt to not only stick the knife in my chest but also add a little twisting motion to it while I sat there in disbelief. I bogeyed the hole and went from being one up after nine to 3 down after 11. It got worse as Randy increased his lead to 6 stokes after we were done with #13. I clawed my way back and winning the next 4 holes to get within 2. On the last hole I needed to hit my 18′ birdie putt and Randy would have had to miss his 3′ par putt in order for the match to be a draw. Yeah, that didn’t happen. I missed my putt and he made his par and that’s how it ended.

The way I see it, it took a truly amazing bunker shot and a very tough, long, slow as shit follow-up putt for birdie from nearly 40 feet to beat me. Now I HATE loosing, but when it happens because of a shot like that and then dropping the birdie putt afterwards,  it makes going down in defeat at least bearable! Some what so.