The Punchbowl at Bandon Dunes Resort

Bandon Dunes is a must play resort, but do not forget about the Punchbowl!

With all the negative talk these days in regards to the state of the game being in complete disarray, I wanted to take this opportunity to talk about one of the more unique experiences I’ve ever encountered while playing golf and it took place at the new Mecca of Golf, Bandon Dunes.

While I’m not one of the Chicken Little theorists who believe golf as we know it is utterly screwed, I do think some serious changes are headed our way. So for one afternoon in the chilly air of Bandon, Oregon I let all my worries of an industry collapse subside and partook in one of the highlights of my golfing life when I played The Punchbowl at Bandon Dunes Resort.

What is The Punchbowl you ask? For those of you who don’t know, it’s only the greatest putting course ever imagined come to life. OK, maybe I went a little overboard with that classification but in all seriousness playing The Punchbowl at Bandon Dunes was the most fun I’ve had on a golf course in a long time, even if it was on a putting course. 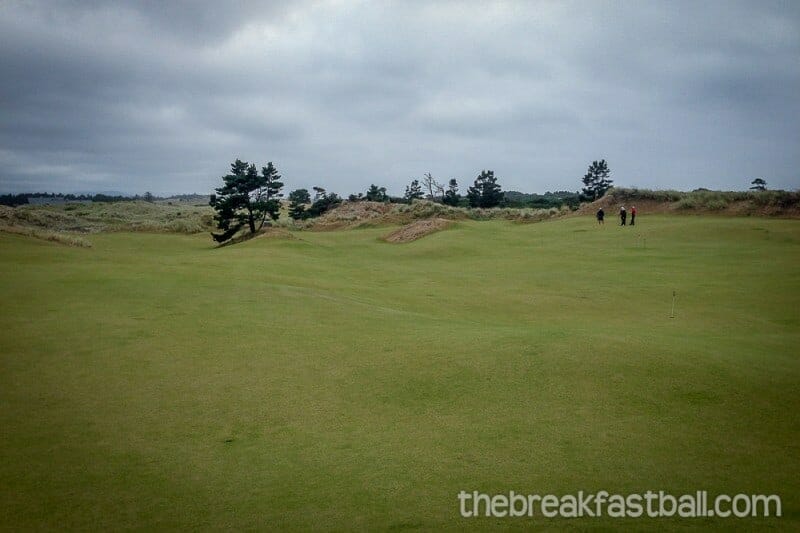 As you walk from the clubhouse to the first tee at Pacific Dunes you can see The Punchbowl off to your left.  This was my first time seeing it with my own eyes rather than a YouTube video. My first thought was WOW, that’s massive. Standing there it looked like a roller coaster theme park for golf balls. The rolling hills is an amazing sight to see for the first time.

My tee time at Pacific Dunes was 12:50pm. The starter was kind enough to tell me all about The Punchbowl during our talk before I tee’d off. The holes on the course had not been cut yet and not a single one of the “tee” markers were out so I was curious how it all worked. I had it in my mind that is was permanent layout and not ever changing. The Starter told me that the groundskeepers come out around 1:30pm and set up the course for the afternoon. At 2pm The Punchbowl opens up and anyone who is there can play. 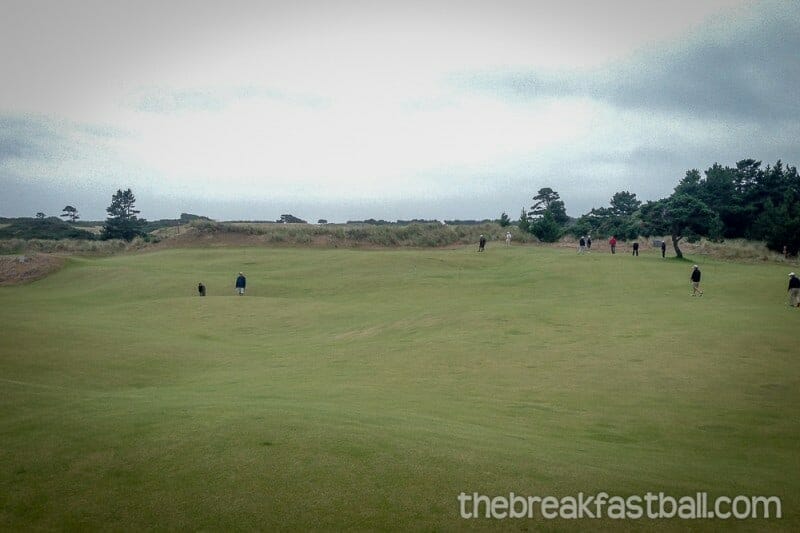 I asked him how much it was to play and he chuckled. “It’s free, and make sure you play a couple of times, it’s too much fun.”

Truthfully after my initial tee shot at Pacific Dunes I completely forgot about The Punchbowl. I was so enamored with the fact I was teeing it up on such a prestigious course a putting green really didn’t resonate with me for the next 18 holes. Once I got to the green on 18 though I started hearing the cheers and roars coming from the course I knew my day at Bandon was far from over.

The atmosphere was incredible. The beautiful Pacific Dunes clubhouse in the background, the number one tee box and 18th green both very visible and don’t forget the close proximity to the ocean with its sea air and mystic sounds, it’s an amazing setting. 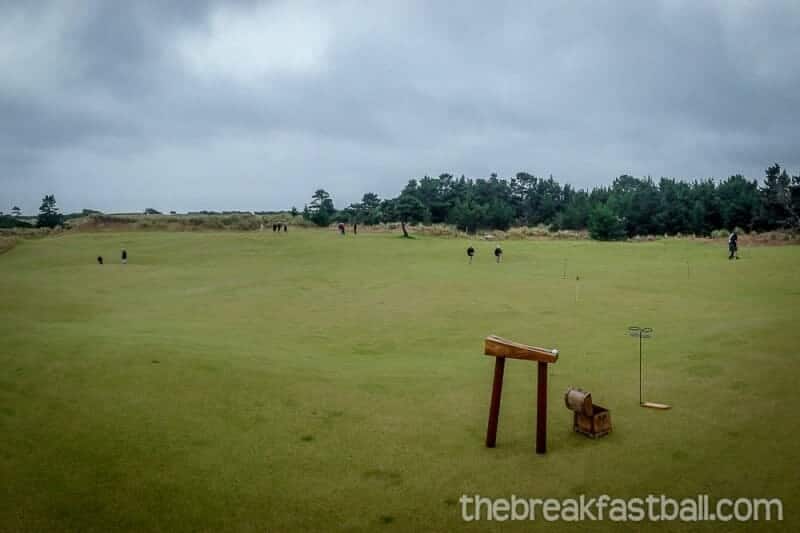 The course is set up like I mentioned earlier each afternoon. I’ve read that they’ll occasionally set up a 36 hole layout but the day I was there 18 was more than enough. At each tee location there’s a marker pointing you in the direction of the hole. Affixed to each marker is cup holder for your beverage of choice, an absolutely brilliant addition in my opinion. Doesn’t hurt that a server from the restaurant will come out and take your order while you’re playing. 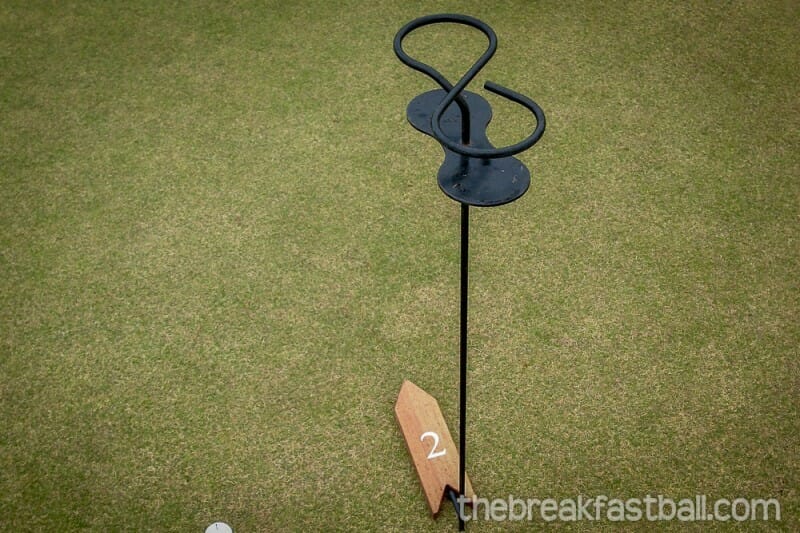 When you arrive at the first tee there’s a box that houses pencils, some ball markers (damn it, I just realized I forgot to grab one of those!) and The Punchbowl scorecards. Because the layout of the holes changes daily there is no set par. I really like that concept, 18 holes, lowest number of putts win, it’s brilliantly simple.

Here’s a pic of the scorecard. I wanted to take this at the course but my phone died shortly after my second trip around so you’ll have to suffice with a pic from my home desk. 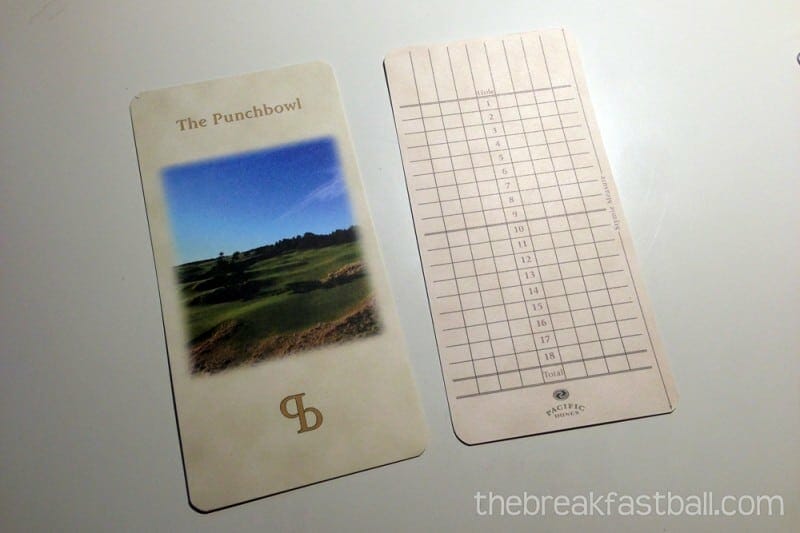 The same cannot be said for the course, it’s far from simple. Holly crap there’s some insane putts to be made. Being there by myself  I was able to really take in the layout and see all the different elevation changes and dramatic sloping that takes places throughout the design. It’s such a neat venue for putting. 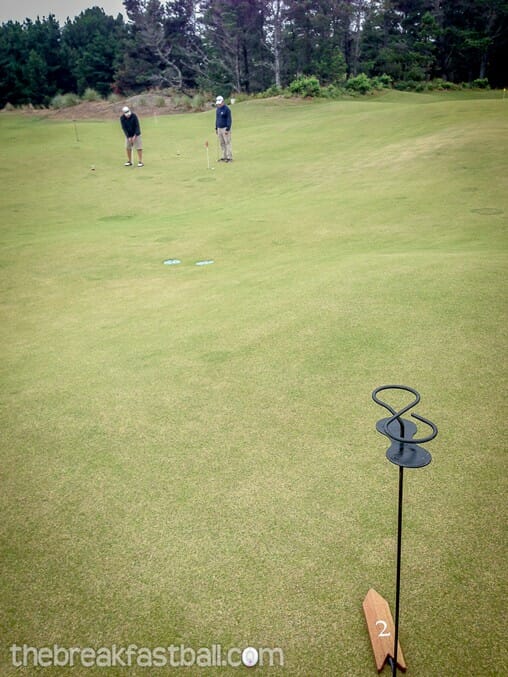 Clapping, cheering, cursing, complaining you name it, it was taking place and it was a blast to watch. Like I said I was alone so I didn’t get to make any wagers amongst friends but that didn’t stop the rest of The Punchbowl patrons. The cheers and roars we consistent and at times hilarious.

I had never seen so many people thoroughly engaged in a putting match. It wasn’t just the men though, the ladies were getting in on the action too, and let’s just say there were quite a few really good putters that were taking it to the guys and I’ll leave it at that. 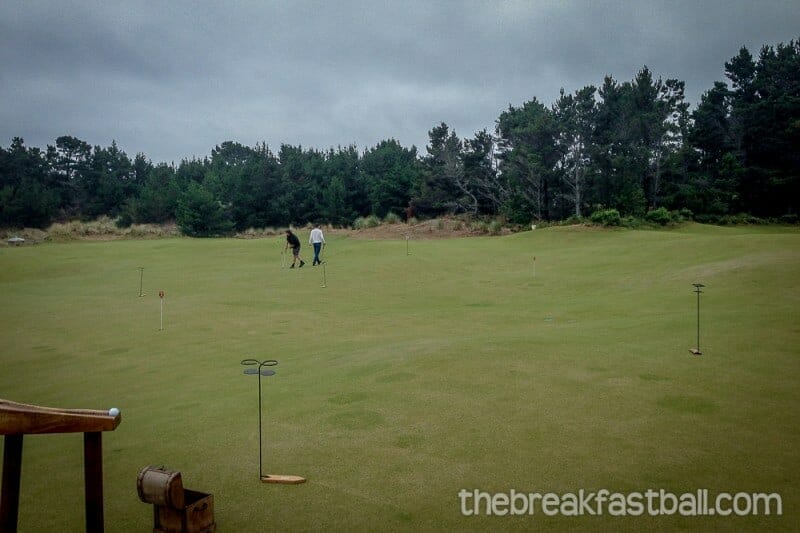 After I was done playing my 18 holes I went up to grab a beverage, the beer in Oregon is so dang good I couldn’t resist playing another 18 empty handed. It was more like 36 though. The crowd that was on The Punchbowl before me had gone off to their rooms and I pretty much had the entire course to myself.

What a way to end a nearly flawless day!

It was without a doubt one of the highlights of my vacation and a great reason to make Bandon a future destination for a golf trip. If you’re headed to Bandon Dunes anytime soon make sure to stop off at The Punchbowl, it’s a must see attraction at a world class resort. I can only hope that one day we get something like this here in Vegas!