Throw those magazines away!

Today feels like a good day for a rant. I’m taking to task the Golf magazines that grace our bookshelves.

When the days at my 9 to 5 (more like 6 to 5) get a little long, it’s easy to find a topic that just annoys the heck out of me and justifies a rant on the subject. Yesterday was one of the perfect situations. I was stuck at work just watching the clock tick down to 4:30 pm. I found an easy way to pass some time by emptying some of my tormenting thoughts. Ones that have been building up inside me over the last couple of months.

This therapy session involves something I’ve been a victim of for a while now, but recently I found a way to put an end to my misery and hopefully after my soapbox proclamation those of you that struggle with your game, as I have, may find the information provided as valuable as I have.

When I picked up golf again back in late 2009

I became fully engaged in the sport and wanted to expose myself to as much of the sport as I could. That included resources such as The Golf Channel, Golf Digest, Golf Magazine to name a few periodicals. Countless websites and articles from all across the internet just in an attempt to familiarize me with all the new aspects of the game. It had been about ten years since I was “into” the sport. So, there was a lot to pick up on, I mean the TaylorMade Bubble Shaft was the big thing out the last time I had read a Golf Magazine.

What happened next was a detriment to not only my game but my knowledge about the golf swing as well, I became entirely consumed with the information I was obtaining. I didn’t bother to care where it was coming from, the simple fact that it was in print or on the internet meant it was legit. It doesn’t help that they throw in a feature piece with a top touring pro and so kindly divulge upon us peons the secrets to their amazing talents. Yeah, that’s who I need to compare my swing with 1 of the top 165 players in the ENTIRE WORLD!

For the last three years, I’ve been a subscriber to Golf Digest and Golf Magazine.

I do love some of the feature articles about some of the history of the game, and occasionally you’ll run across a story about the sport that is enlightening, and I guess they made me feel connected to the sport more than anything else. All those articles are great, and I do love seeing the different courses that the magazine’s display but the area of the where I became completely infatuated with was the lessons. 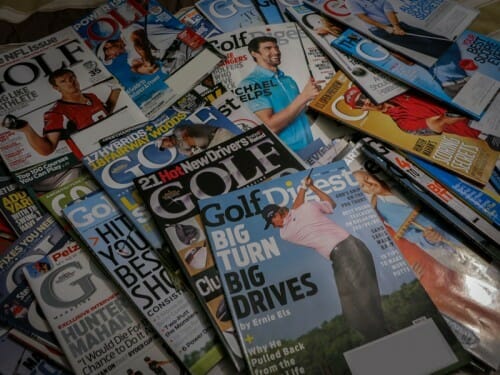 Looking back at the last four years I honestly feel the WORST thing any beginning golfer can do is flip through the pages of one of these magazines. Then find an article that reads “FIX YOUR SLICE IN 5MIN”, take that info to the range and try to “fix” their swing.

After working with Wade for a few months, I decided to stop watching every show of the Michael Breed’s GolfFix. And, Marin Hall on The School of Golf. (Yes, Holly Sonders makes the show enjoyable for reasons other than helping your game, but that’s a different subject matter). It was doing more harm to my game than good.

Say no to the subscriptions

The Ballard swing, which is what I’ve been working on for the last 13 months, has a very different ideology. Once I started to understand the swing it became incredibly apparent that I was getting NOTHING from the Internet. The magazines or the Golf Channel show.

I’m not saying the people who write those articles are crazy or misinformed, but it was me that was crazy for thinking I would be able to create a functioning golf swing using articles from magazines written by over 50 different people. Especially individuals who have NEVER seen me swing a golf club and know nothing about my tendencies or ball flight. In fact, it became even clearer how much damage was being done to my psyche when I was introduced to Steve Wozeniak.

Click HERE to go to Steve’s blog where you can read some of the best articles I’ve ever read from a teaching pro about the golf swing and how misleading publications or TV shows for that matter can be to someone learning the game.

After Wade turned me on to Mr. Wozeniak and after I had read his entire blog, I started to look at the reasons why I was still subscribing to the magazines. It didn’t take long for me to realize that it’s been a false sense of connectivity to the game. Each month I get a few magazines, and I feel like an elitist with all this insider information. It’s hilarious really. No longer though is that the case though. With the arrival of my March issues my tenure as a subscriber ends. And, with that comes a ton of free space on my bookcase.

I’m getting so much more information out of my Twitter, and Instagram feeds than I ever have from any magazine. I’m connected more than I ever thought I was and never realized it!

Reading Mr. Wozeniak’s blog has made me understand something critical. There is no way an article in a magazine is going to do anything to improve my game. Working on the fundamentals of the swing is the only way to improve. Now that I have Wade to teach me those proper fundamentals I can say SEE YA to all these magazines and TV Shows. Thanks, it’s been fun, but you have my attention no more. Except for Holly of course!

My future progression the only person I’m leaning to for advice and drills is Wade and occasionally Jimmy Ballard’s book “How To Perfect Your Golf Swing” and I think that is going to be a tremendous benefit for my development. No longer is my head being pulled in different directions from the different philosophies of all the teachers. I can lock in on what works for me and improve my fundamentals. 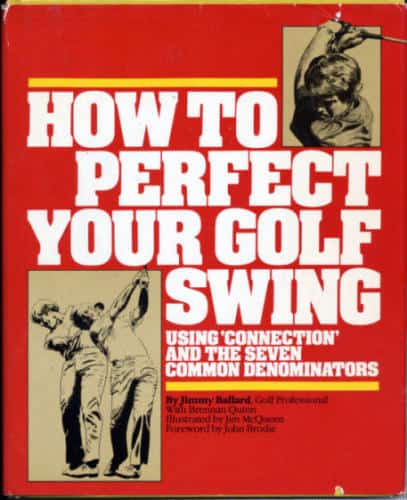 So do yourself a favor. Grab that stack of magazines and joyfully walk them over to the recycling bin and give em a heave. Then walk over to your DVR and DELETE anything that relates a swing improvement segment from any TV show. From there head to the range and watch your ball flight. Work on the fundamentals and get your game going in the right direction! Whether it be the Ballard method or any other swing ideology,  find one that fits YOU and stick with it.