The Travesty at Oakmont

The Travesty at Oakmont

There’s nothing quite like Sunday at a Major Championship. There are ups and downs, pressure-packed shots, and nerves that one couldn’t even imagine, or so I would assume. The closest thing that I’ve come to those feelings and Sunday at a major was teeing it up in the 2011 USGA Junior Amateur Championship, and let me tell you; I was so nervous on the first tee I could hardly pull the club back.

It might have had something to do with the hundreds of people that were gathered around the 1st tee or maybe it was just the prestige of playing in a USGA National Championship. Either way, my stomach was in knots. Those people, of course, were at the tee box a group early because some guy named Jordan Spieth, you may have heard of him, was in the group behind me. Those emotions, I would imagine, are multiplied many times over when the stage is the US Open, and the canvas the players are trying to paint their masterpiece on is the famed Oakmont Country Club.

The only reason that I included the bit about the 2011 US Junior is to let you know that although not in the same situation, I do have some experience when it comes to golf at the National Championship level.

Now let’s get into what this article is all about. The definition of the word travesty is as follows: “Something that is shocking, upsetting, or ridiculous because it is not what it is supposed to be.” To me, that word describes everything that myself and many others felt about the way Dustin Johnson’s rules situation was handled by the USGA this past Sunday. Shocking, upsetting, or ridiculous. If you ask me the handling of the situation was all three.

The first thing to discuss is what happened on the 5th green at Oakmont on Sunday. Dustin Johnson set his ball down to get ready to roll a three-foot putt into the hole. He took grounded his club to the side of the ball, took two practice strokes, grounded it again, and then lifted it for a moment before he went in to set the putter down behind the ball.

During the time that his putter was in the air, and had not yet been grounded behind the ball, or as far as the rules of golf are concerned, before he addressed the ball, he noticed the ball make a small move backward. The moe=vement of the ball prompted him not to ground his club and to call over playing partner Lee Westwood. He told Lee that he did not address it and Lee agreed. Next, he called over a rules official who also agreed and advised Johnson to proceed by playing the ball from the new location since he did not cause it to move. 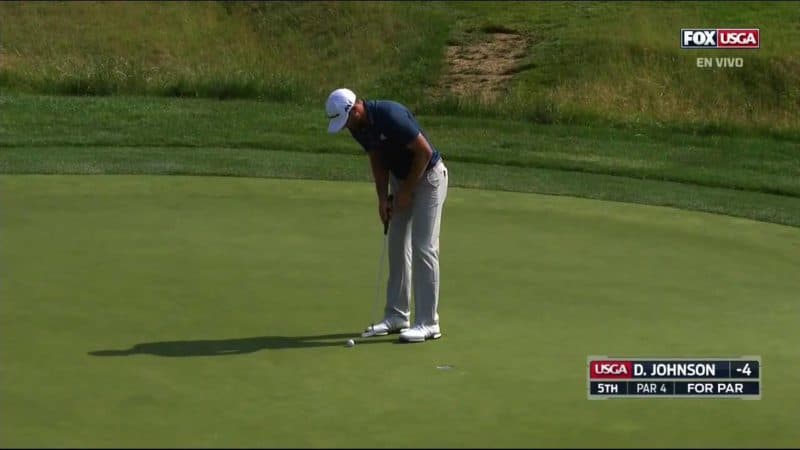 Over the next couple of hours, the time that passed between the 5th green and the 12th tee, officials from the USGA got wind of what had happened from the rules official that was following Johnson’s group, and they decided to take a look for themselves on the reply. By doing so, it is the first part of the downfall for the USGA in this whole situation. I understand that there were a lot of people out there and navigating around the golf course could take some time, but how on earth does it take them hours to look at the replay and notify Dustin that they thought there was an infraction on his part? 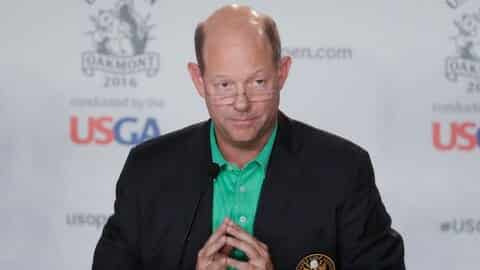 Now comes the incident on the 12th tee, where a USGA official comes up to Dustin to tell him they believe he MIGHT have caused the ball to move and they would have to talk about it after the round. Although the entire handling of the situation baffles me, this part, in particular, is especially disturbing. In addition to the fact that Dustin is trying to win his first major by overcoming heartbreaking losses and a wacky rules scenario in the past, the USGA is going to come up and tell him that he may or may not have a penalty coming at the end of the round? AYFKM?!

I spoke with Andres Gonzales (@Andres_Gonzales) who was also in the field at Oakmont. In regards to the USGA approaching Dustin on 12, he said,

“The way that it was handled was laughable and completely inappropriate.”

Half of the problem in this situation occurred right here on 12 when the leader of the golf tournament, the other players on the course, the fans watching in person and at home, as well as the commentators, don’t know where the leader of the golf tournament stands in relation to par. If it were me in that situation, I wouldn’t have hit another shot until they gave me a definitive ruling. IN the end, the USGA ended up penalizing him, and by the way, the rules officials were talking about it during the broadcast, it sounded like they were pretty hell-bent on doing that the whole time, so why not just give it to him on 12 and be done with it?

I spoke with a friend of mine, Troy Kelly (who plays on the PGA Tour and made the cut in last year’s US Open) about it and what he had to say was,

“I just couldn’t believe they didn’t make a ruling on the spot and made him continue playing!” Now, that is just half of the problem in the situation, that they made him play with that looming over his head, the other half is the question of “Did he actually cause the ball to move?”

I’m not sure if many of you have ever played on greens that roll a 14+ on the stamp meter. (Which by the way was invented at Oakmont, I think they only mentioned that 234 times on the broadcast this week. Great work Fox Sports) BUT, I know that I have, and I can tell you that if you’re standing next to your ball, you could probably make it move with a fart if you had some excellent Mexican food the night before. Support for Dustin was unanimous across social media from players ranging from the top of the world rankings to the bottom.

There were too many good tweets about it supporting DJ and bashing the USGA to quote them all, but Rory, Rickie, Jordan, and Jon Peterson’s tweets might be worth a read if you have some free time.

How could Dustin cause the ball to move back if he grounded his club next to the ball and not behind it, nor did he ever address it or touch the ball with his putter? I would love to go into detail about the USGA’s thought process on this and how they came to their conclusion, but I literally cannot even begin to think of how they came to their conclusion so I’ll leave it with the fact that they have genuinely stumped me with this one. I don’t see where they got all this “evidence” from that they have been talking about. Which brings me to my next point, when did making a rules decision become akin to standing trial in court? 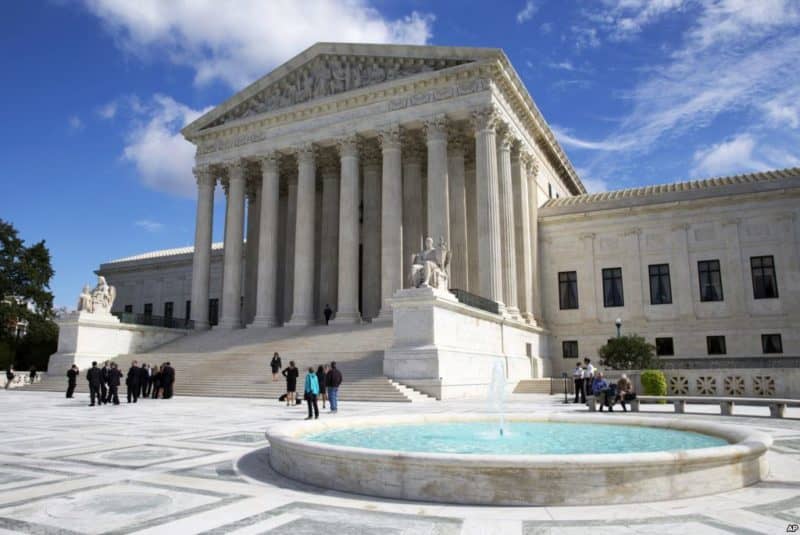 Golf is not the only sport that I watch religiously on television. Baseball, football, and basketball would be the three I watch most, with the occasional soccer game if the USMNT is playing and of course whenever women’s beach volleyball is televised. Never mind those last two, though, the first three all have one thing in common and it’s one word when it comes to replays. Indisputable, which means impossible to question. The evidence needed to make or overturn a call in any of those sports is INDISPUTABLE video evidence. Why is it then, in the eyes of the USGA, it just has to be more likely than not? (By the way, I still think it’s more likely than not Dustin didn’t move it, but I’m no USGA official.)

When I spoke with my friend PGA Tour player Michael Putnam (@Michael_Putnam) who has also made the cut in previous US Open’s, he said;

“Unfortunately in golf you are 100% guilty until you can prove you are 100% innocent which isn’t right. Rules officials think their power is greater than the word of the players. This whole situation now brought to life on national TV might finally shake some things up. This rule specifically has “screwed” many players in the past and will penalize many in the future. Maybe giving the player the benefit of the doubt just a few more times might be good for the game of golf!”

Spinning off Michael’s quote, as well as the countless PGA tour player tweets I have read about this rule specifically and the way that the USGA addresses it, it does seem that the USGA has it out for the players. In legal terms, they have no problem convicting innocent players to make sure that all the guilty ones are condemned as well.

To quote something that my senior class used to chant at referees in our high school basketball games,

All in all, it worked out this time with DJ winning by more than a shot, and I’m sure everyone at the USGA was happy about that, imagine the twitter-sphere if he would have gone on to lose in a playoff because of the ruling. I know I was pleased for him, the guy has more talent in his left pinky than most guys will ever have in this game and he was long overdue. I know this isn’t an article about how great Dustin is, but don’t be surprised if he wins quite a few more majors. My instincts tell me he will finish with double digits, but only time will tell. 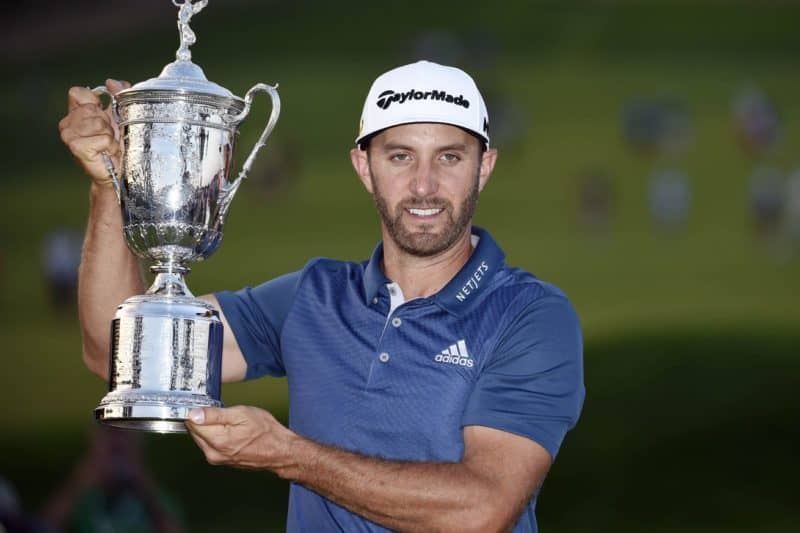 It’s pretty clear from the player’s point of view that the USGA dropped the ball on this one, and that might even be an understatement. Andres also said when I asked him about it,

“It is a stupid rule in my opinion… I haven’t met one person that thought it was a good ruling.”

Coming from someone who was playing in the tournament, I’m sure when he says, one person, he means everyone literally on tour thinks it was a wrong ruling. Something has to change with the USGA going forward. AS referenced earlier, I think the majority of this problem can be solved by incorporating the word indisputable into the way the USGA looks at replay footage. Find me one person that will say there was incontrovertible video evidence that Dustin caused that ball to move and you will have found yourself a liar.

The USGA needs to be better about their reply’s, plain and simple, and also they need to not hang a penalty over someone’s head for the last seven holes of a major. The players deserve better. The fans deserve better, and the game of golf deserves better.

My name is James Feutz and I am going to be doing some guest writing for The Breakfast Ball, covering an array of golf topics, as well as documenting my collegiate golf career at the University of Pacific in Stockton, California 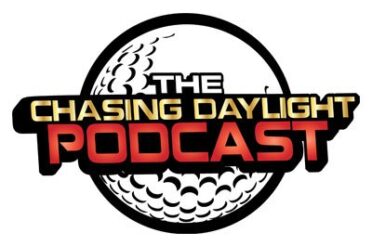 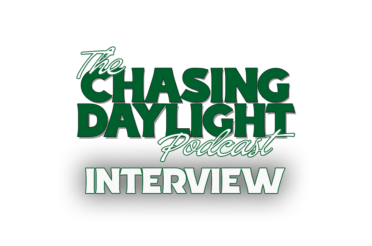 No 117 Season 3 Episode 41 We’ve committed to getting more Vegas-based content on the... Read More