The new Tryst Robusto E-cigar has a modern element to bring with you to the golf course.

It’s a natural correlation. If you have ever been out on a golf course, there is 99.9% chance you’ve encountered a big, fat, smelly and obtrusive cigar during your round. Or, maybe you’ve experienced one of the great joys of being out in the fresh air with some friends enjoying the game, and a marvelously crafted hand-rolled cigar.

Not everyone enjoys the partaking of a good cigar during a round of golf, and on the contrary, there are the players out there who wouldn’t step foot on a course if not for the burning of their favorite brand of cigars. To each his own I say, but for me, as a fan of puffing away on the course, it’s an excellent perk having a few friends that wouldn’t have it any other way.

Aside from your convenience store Black Raspberry Swisher Sweets, my knowledge of the cigar world is tragically limited to what’s handed to me. If I ever do venture into a cigar store or the humidor at Total Wine & More my awareness of what’s before me would rival my wife trying to differentiate which golf balls I’d like for Christmas. Yeah, I’m clueless.

The positive thing about my dilemma is I have a cigar aficionado as a friend that has exposed me to some pretty outstanding selections. That hasn’t helped me when it comes to picking some up for myself but I’ve gotten a somewhat good understanding of what I like, and for me it’s flavor.

Because of my desire to enjoy a cigar and not be one of those who “must” have one even if it’s crap while playing, I was thrilled when Tryst, the company behind the Tryst Robusto E-Cigar reached out to me to see if I’d like to check out their products.

Yup, you read that correctly, I’m talking about an electronic cigar.

The vapor smoking craze has, in my opinion, taken over. Vape stores appear on almost every corner now, and just in my circle of friends, I have a handful of them who have switched from smoking tobacco to a vapor tool.. cig… uh oh hell, I have no idea what they’re called.

You can tell my lack of knowledge on the vapor community is pretty profound, but I was intrigued to see if the “vaping” phenomenon would translate over to the enjoyment that comes from a real cigar.

When the package from Tryst arrived, I was expecting maybe one or two of their Robusto E-Cigars to be inside, but that wasn’t the case. Inside I found a wide variety of flavors that surprised me. Here’s what I received: Vanilla Spiced Rum, Crème Brule, Brandy, American Classic Cigar and Kona Coffee and from my perspective that’s an excellent assortment.

I call it Vintage Cigar Box Art. The E-Cigars come wrapped in plastic like a typical retail container for cigarettes or cigars and once the plastic wrapping is removed the box opens up and you’ll find one e-cigar snuggly fit inside. It too is wrapped in plastic which I can only assume to maintain the freshness of the flavoring juice that has been added. 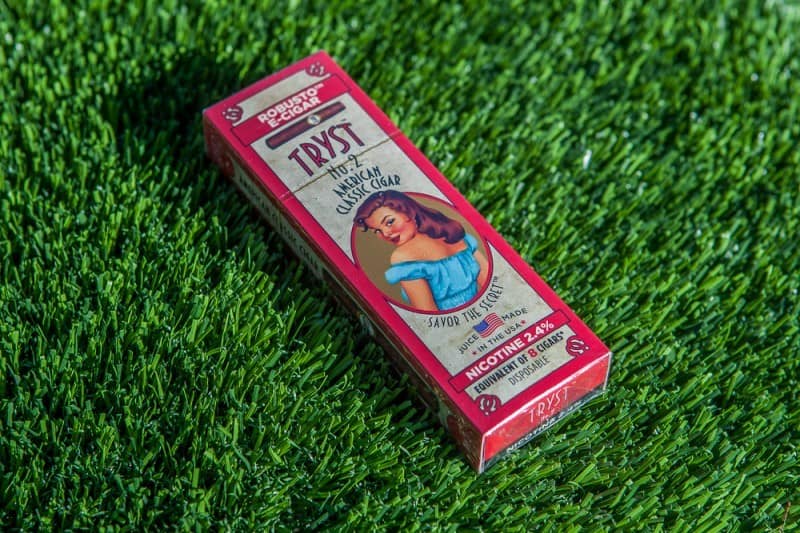 The wrap used has the look of a real tobacco leaf, and the logo band adds to the look of an authentic cigar. The best part is the end, though. When inhaling the “lit” end lights up in a red glow simulating the burning that would take place if it were a real cigar.

It’s a lot of “show” for an e-cigar, but I have to admit it was kinda cool when I realized that feature was there. 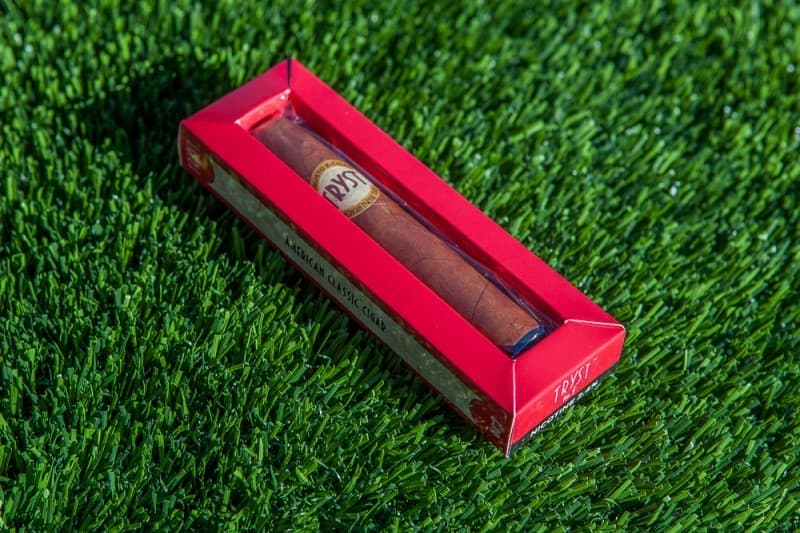 The flavors are haven’t disappointed either, and they are rather robust.

Pun intended. So far my favorite flavor has been the Crème Brule followed up by the Vanilla Spiced Rum. The bonus of being an E-Cigar flexes its muscle when you

There are lots of gadgets out there to help with some of these things, but I always carry a cutter in my bag as a precautionary measure. I’ve been the hero more than once when people have left behind a much-needed tool. 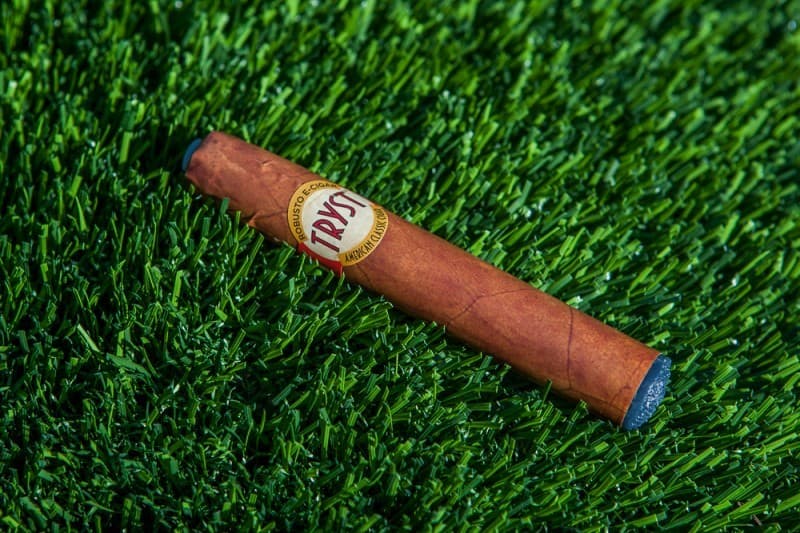 I’m not a smoker, so when I found out, the e-cigars carry 2.4% nicotine I immediately went to the internet.

I needed to find out just how much that was. It turns out it’s quite a bit, and this goes back to my cluelessness about cigars. I had no idea cigars contain the highest amounts of nicotine when it comes to smoking. Thinking about it now though it makes sense, when you compare the size of a decent cigar to a cigarette it’s a no brainer, the cigars are massive. So the extra nicotine content is legit.

Nicotine isn’t exactly good for you so much like a hot cup of coffee will burn you; nicotine intake does come with some warnings. There, you have been warned. By no means is that an outstanding PSA but I think everyone understands the risks that come with nicotine intake, so I don’t want to beat a dead horse. Maybe you don’t know or are not aware if so head on over to Google, it’s your friend.

So what does 2.4% mean? Here’s an info-graph I found on the FAQ page at ECCR (Electronic Cigarette Consumer Reviews) 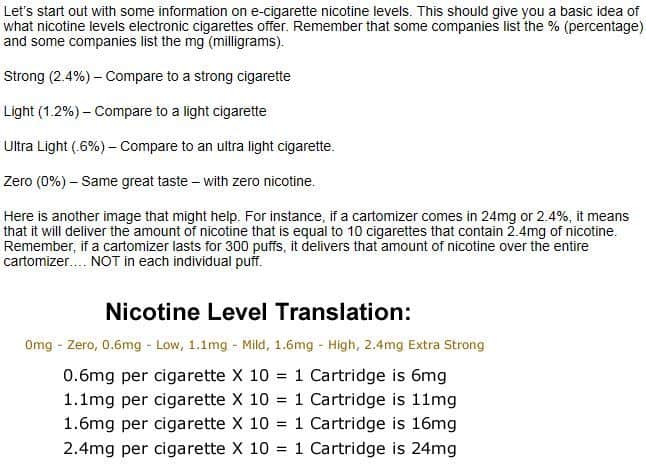 All techno mumbo-jumbo aside, the Tryst Robusto E-Cigar is a fantastic alternative to a real cigar.

Yes, it’s true you won’t have the clout that comes along with looking like this guy when you’re on the course: 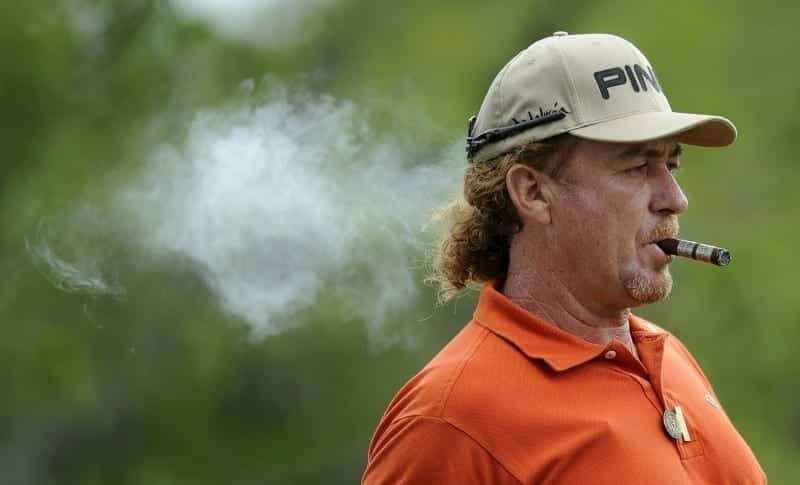 But you will have an enjoyable cigar-like experience without the bothersome smell and odor that have a tendency to linger on your clothes and hands, which makes the Tyrst E-Cigar worth a try.

I do want to be clear, by no means am I advocating vaping.

There are inherent risks as I mentioned before and the entire truth about whether vaping vs. smoking is “better” for you is a lengthy and ongoing discussion.

I agreed to do this write up to help expose my readers of this blog who may also play golf and during their rounds enjoy a cigar, that there are other ways to enjoy the cigar smoking experience. With that being said, I fully intend to have a Tryst Robusto in my bag for future outings or at least until I run out of the shipment I received. When you consider that each one is equivalent to 8 standard cigars I have a pretty good feeling, I’ll be vaping away for a while.

To check out all the products Tryst has to offer or to find a retailer in your area, head on over to their website. Or you can stop by any one of the nationwide Sheetz locations and purchase them there.

You can find Tryst e-cigars at Famous Smoke Shop. The No. 2 Robusto sells in 12 packs for $152.99. Since each Tryst, Robusto is the equivalent of eight cigars a 12 pack equals out time wise to 96 cigars, and that’s a real deal.
Previous Post
Next Post