You could say I’m not happy with the first day of this years Winter Classic. You could also say that I just sucked ass. The later would be the more realistic description.

Not exactly how I wanted to start things off. Posting a 108 stinks. Doing it on the first day of our tournament almost immediately takes me out of contention for the cup.

The day started off rather well. There was a chill in the air but it wasn’t unbearable. The clouds were high and the wind was almost non-existent. The problem was that was at my house which is about 45 miles away from where we were playing.

I first noticed how much the temperature had dropped about five minutes outside of State line. I glanced up at the rear view and saw that the outside temperature was at 25°!! I almost crapped myself. It was about 40° at my house when we left. I was expecting the temperature to be somewhat lower but this was nuts.

Of course that meant a frost delay. We arrived about 8:40am and were scheduled to go off the first tee at 9:50am. That wasn’t going to happen. We went inside and just waited around until they decided to let us go to the range, which wasn’t until 10am. Lucky for us we were outside waiting when we heard the call that the range was open because in a matter of minutes, after we got on the range, there was a line of players behind each stall waiting to hit. That was annoying as hell. I had a gentleman literally standing so close behind me waiting for me to finish that I had to check where he was each time before I swung for fear of hitting him.

You can understand why I didn’t spend much time on the range. I got a few things dialed in and headed over to the putting green, I mean ice rink, to get warmed up with my putter. That green was as hard as a rock. I did get to putt for about 10 minutes before we got the call, but there was no way to judge, at least not for me, how the hell the greens were going to roll. 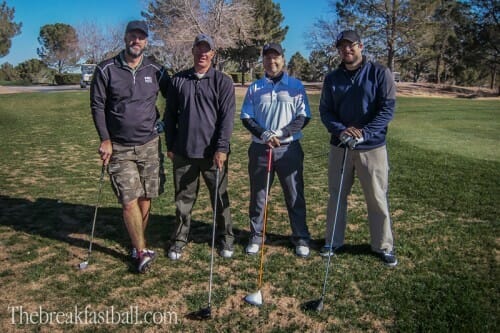 When we tee’d off the temperature outside was about 35°. Very cold, but thankfully there was no wind. I hit my drive down the right side of the fairway (pretty happy I hit the fairway on my first tee shot of the tournament) and we were off. My approach was from about 185 and I hit a nice 5i to the right of the green and left myself a short little chip shot. That chip shot, once I hit it, kept going and going and going, finally coming to rest about eight feet past the hole. The next putt wasn’t that difficult of a putt, it was a left to right breaker that was something I’ve seen a hundred times. I blew it past the hole a good 10 feet and now had an uphill, right to left that was anything but easy. Being an uphill putt I of course left it short and my tap in one footer lipped out. Yuup, that was a 4 putt to start the tournament. It felt like someone had cut a HUGE hole in my sail.

The next hole I made up for that debacle by hitting my best drive of the day. I smashed this one and it was on a fantastic line. Everyone thought I had cleared the bunker and we all were stunned when the ball fell short of the bunker, hit the hillside and fell into the lake. I took my drop and wasn’t too upset. It was a Par 5 and I had a great line into the approach area. I hit that shot, smoked my hybrid, and after a very, VERY nice pitch shot that followed I had myself a 10 footer for Par. What I had and what I did were two very separate things though. I backed up my four putt on the first with a three putt on the second. A triple/double start and that’s about sums up my day. 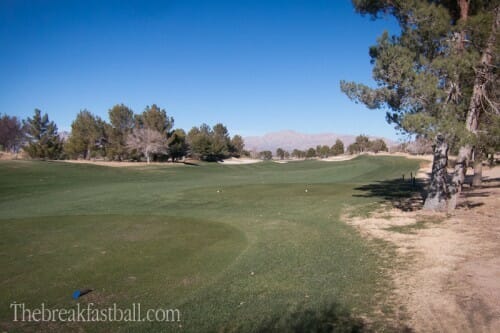 Nothing really was working. My driver was dismal. I only hit 35% of the fairways and that did not leave me many opportunities to go for the greens. I logged 6 three putts and a 4 putt, in route to 42 total putts. That’s just unacceptable. The 7 penalties didn;t help either. I pretty much gave up 17 strokes do to my bad play.

Here is the standings after round one of the Winter Classic:

Next up is Rio Secco. The good news is the weather should be A LOT better. Actually the weather at Primm wasn’t that bad once we got out there. The greens, for me, were just a nightmare to get a feeling for. Hopefully the round two recap will be a little bit more positive from my perspective.