Round 2 of the Winter Classic Recap

It seems as though I’m putting together the perfect receipt for disaster after another bad outing for Round 2 of the Winter Classic.

Sunday wasn’t as nearly as bad as Saturday was. First off the weather was SO much better. A little chilly out but no frost delay, no wind and the Sun even decided to step out for a while.

I got to the course really early. After what took place the day before I knew I had to spend some time on the range getting some of the kinks ironed out. The first mistake I came across from the previous day was I had my driver set up on the complete wrong loft. I spent some time playing around with the settings at Callaway on Friday night and never switched it back to the standard loft. I pretty much played with a 12° driver on Saturday. I’m not saying the reason I was so bad was because of that, but it didn’t help that my drives were a mile high in the air and didn’t carry at all!

The other item I came early to address was my putting. It’s been awful lately and I really needed some time on the short grass to try to figure it out. I put my old TaylorMade Ghost back in the bag for Sundays round, I’ve just never have gotten comfortable with the SeeMore stick and the difference showed right away. I made more putts in 5 minutes on the putting green than I did all day at Primm. The TaylorMade just feels a lot more like it’s a part of my stroke, where the SeeMore I just don’t have a connection with it. 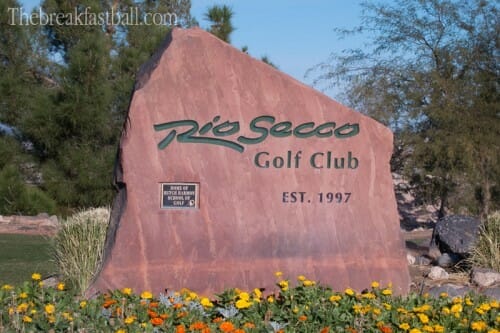 Over all I played a much better round of golf. The scorecard doesn’t reflect that at all, but I know what happened out there and I didn’t play that bad. I was on pace to shoot in the low 90’s after we wrapped up the 13th hole. That’s when the wheels came off and I went spinning out of control!

I tried to cut the corner on the 14th and came up about three feet shy of the rough. It was probably my best drive of the day, just a couple of degrees too much left of where it need to be. The ball wasn’t exactly playable, but because I cut the corner the only other option was back to the tee and I didn’t want to do that, so with a quick punch shot I tried to get the ball out onto the grass. That didn’t work and the result of the shot was an unplayable lie. I didn’t get much relief and was almost in the same predicament. That shot also resulted in an unplayable lie and after that drop I was finally able to get the ball on the grass. I went from hitting two to the green (had my ball made it) to hitting 7 to the green.  My 7th approach shot came up short and I carded a 10 after a chip shot and a two putt. 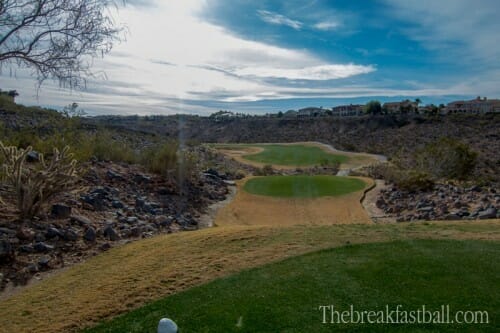 That was hard to swallow. I tried as fast as I could to forget about it and move on and I did. The next hole is a Par 3 that I hit a fantastic tee shot on, the ball was about 10’ above the hole for birdie. I don’t know why but for some reason I pounded the hell out of the ball and blew it a good 10’ past the hole. Now facing the uphill version of the same putt, I left it short and tapped in for my bogey. An awful 3 putt when I had very make-able birdie putt in my sights!

The 16th was a disaster. That’s the only way to describe it. My feeble attempt at a tee shot veered way, WAY off-line and I had to drop. Next swing was a fat chunky mess that ended up in an unplayable situation; my next shot after the drop was another fat mess that came to rest on the cart path. I at least got some relief from that. I hit another fat chunky shot on my next swing that was in the desert. Popped that one out and had a NASTY downhill double breaker that was, to say the least, not an easy putt. The only good thing was I managed to hole the putt in two strokes from 40’! 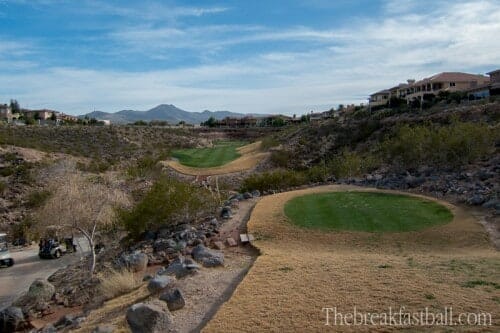 The 17th wasn’t much better. More of the same mad swings and I had completely taken myself out of the running for the cup. In a four hole stretch I recorded scores of 10, 4, 9 & 9. That’s 32 strokes over four holes. Arguably the worst stretch of my life. When we started the 14th I was 2 up on Pat, 3 down to Randy and 3 down to Bill as well, and that’s scratch! After the 17th I was down 11 to Pat and 13 to Bill & Randy. A very sad turn of events for me and my chances of winning this year’s Winter Classic.

On the bright side, I putted a lot better Sunday. The flat stick hurt me so bad on Saturday, I was at least pleased to see I didn’t stink up the joint at Rio. Also I’m starting to get a better understanding of the Ballard swing. Wade told me that everything that is taking place with my swing is expected and that it will take some time. 108 & 104 is nothing to be proud about, but honestly I like the direction I’m headed. 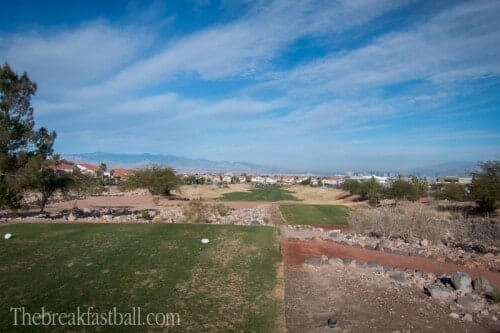 Randy had himself another good day on Sunday and padded his lead a little bit. Here are the standings after day 2 of the 2012 Winter Classic: 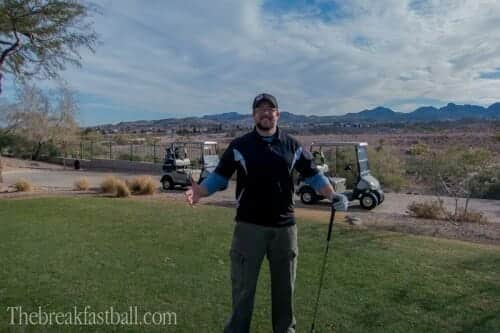 This upcoming Saturday we head north to one of my favorite courses in all Nevada; The Chase at Coyote Springs. It’s going to be one hell of a conclusion round as we bring the Winter Classic 2012 to an end. Randy has a pretty good lead, but at The Chase, anything can happen.