The 2011 Winter Classic Champ is crowned!

We wrapped up the second annual Breakfast Ball Winter Classic yesterday and Bill is our 2011 Champ! Beating me out by 1 stroke! 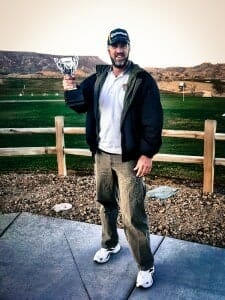 It actually came down to the final hole. On the Par 5 ninth at Conestoga Bill was on the green with a nasty putt from around 15′. Me, well I was in the green side bunker getting ready to hit my 4th. Bill’s approach shot found the water and I played my shot very, VERY conservative. I actually aimed for the bunker. Yep, I said it I aimed for the bunker. Considering I was 12 for 13 on executing my sand shots for the three days I was, in my opinion, in the better place hitting out of the sand. After Bill’s drop and 4th shot he chipped on from off the green and was looking at his putt for a bogey 6.

I hit my sand out and was left with a 30 footer for my Par. The putt broke from left to right, but I read it very poorly because it broke from LEFT TO RIGHT!!!! Wow what a crazy putt that was. The numbers don’t show it but I putted really well all day, actually all three days. I was absolutely stunned that the putt ended up where it was. Bill stepped up and made a clutch putt for his six.

A word of advice to anyone out there who cares. Be sure to know where you are in the overall of a tournament when you stand over a putt on the last and 54th hole. I needed my second putt from 10′ to drop to tie. Bill and I had talked about where we stood with five holes to play but I honestly wasn’t thinking about it and I probably should have been. Does that mean I would have made the putt, no, but you never know! Bill knew where he stood and sank it with a lot of pressure. I wish I could have put that pressure on myself, because my ten footer came up about 5 inches short and that was that. 1 Stroke. I still can’t believe it!

I am happy with how I played. I started the last round better than any round I have before. I told myself before we started that I wasn’t going to let Conestoga beat me and that I was going to play the course to my ability and not make costly errors. Then, on our 6th hole the Par 4 15th my mental toughness that I was so proud of took a beating and I never recovered. 8 penalties on holes 6-15. That not going to win you jack!

I made three really stupid errors. One each day that cost me three strokes overall. Mental Toughness. Mind Over Golf, a book about the mental side of the golf game, Dr Richard Coop the author talks about (on page 72) mental toughness and I think I might need to get this definition tattooed on my forearm;

“The ability to consistently control the mental, emotional, and physical response to situations in which there are stimuli that produce high levels of distraction, stress or tension.”

I could write for hours about the mistakes I made or what I should have done or this or that, blah, blah, blah. What I am going to do is take this entire weekend, every round, every stroke and every costly penalty add it to my library of experience so next year I’m even more prepared.